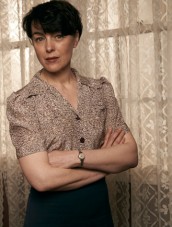 The actress also talks the end of DOLLHOUSE 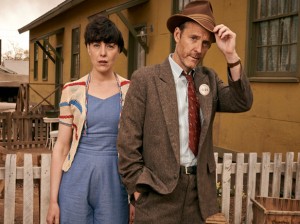 WGN America’s new series MANHATTAN, airing Sunday nights, is a dramatized look at the then-ultra-secret World War II-era Manhattan Project. The United States hid away a group of scientists and their families in Los Alamos, New Mexico, so that the atomic bomb could be developed without prying eyes.

Olivia Williams plays Liza Winter, another scientist who finds herself professionally ignored while her husband Frank, portrayed by John Benjamin Hickey, toils with the other physicists on the practical applications of nuclear fusion.

Williams, a native of London, England, is no stranger to historical stories or characters with big secrets. Regarding the former, she portrayed First Lady Eleanor Roosevelt in HYDE PARK ON HUDSON, author Jane Austen in MISS AUSTEN REGRETS and mystery writer Agatha Christie in AGATHA CHRISTIE: A LIFE IN PICTURES; as for the latter, Williams played Adelle DeWitt in both seasons of Joss Whedon’s series DOLLHOUSE. Other major roles include the Bruce Willis’ character’s wife in THE SIXTH SENSE and another real person, Betty Dury, opposite Andy Serkis’ Ian Dury in SEX & DRUGS & ROCK & ROLL.

Williams has just finished participating in a MANHATTAN Q&A session held by WGN America for the Television Critics Association, where she’s game for some follow-up discussion.

ASSIGNMENT X: How did you become involved in this project?

OLIVIA WILLIAMS: They directly sent me the script via my agent, but [MANHATTAN creator] Sam Shaw did that extremely successful thing of blowing smoke up my ass and saying the role was written for me, and I believed him. Twenty other actresses may contact you and say, “You know, I turned it down first,” but I bought the old, “This was written for you” gag.

AX: Liza and Frank are both scientists. Is their marriage like, say, that of the Curies?

WILLIAMS: Well, Liza’s tragedy is that when they lived in Princeton, he was a physicist and she was a botanist, and when they come to Los Alamos, she is unable to practice her profession. She was a teacher and a professor, and she gives all that up, in a slightly old-fashioned but loving and supportive way, so that her husband can be part of this extraordinary investigation of unlimited budget. This was a marriage when the two of them would sit at dinner and he would talk physics and she would talk botany and they would have an intellectually equal marriage of the kind that existed at the time, but once they get to Los Alamos, he can’t speak to her [about his work] any more, and that’s the breakdown of their relationship, is the fact that government secrecy is causing their marriage to fail.

WILLIAMS: When I was sent the script of the first episode, I was like, “Why did you bother sending me a script about a bored housewife in New Mexico?” and the fact is, she has a scientific and inquiring mind, and she starts to notice strange things happening botanically in New Mexico, and she starts looking for an explanation for that. I learned to think of her as the Cassandra [of Greek mythology]. She is the woman who is given the gift of prophecy and the curse of never being believed.

AX: How is it playing opposite John Benjamin Hickey?

WILLIAMS: Fortunately, we hit it off to the most absurd degree from about the first three seconds we met, so it’s been wonderful. He’s a phenomenal actor, both on stage and on screen and I can’t really overstate how well we’ve got on. I believe that’s because you are with someone who is free and beneficent, who’s well-disposed toward you, you can play tragedy as well as comedy. You can play anything with someone who’s open, and he’s one of the most open people.

AX: How aware were you of this period in history prior to the show?

WILLIAMS: Well, very aware because of playing Eleanor, so I had researched this period of American history and the relationship with the war, but my knowledge of Los Alamos specifically was woefully lacking, and the more I read – people said, “Did you do lots of research?” and the fact was, once you start reading about it, you just can’t stop, it’s so fascinating, and the more you read, the more absurd it seems. We’ve said many times that if this show was proposed as a fictional sci-fi show, you’d go, “That’s too ridiculous, that couldn’t happen, you couldn’t secret five thousand people on a mesa in New Mexico without somebody finding out.” So the fact that it’s the truth is the only thing that saves it from being absurd.

AX: Do you use your own speaking voice in the show?

WILLIAMS: I am allegedly playing an American, but I slightly failed in that, in that I’ve played an American in movies when you have lots of time for preparation and a pretty firm script, but I think my character may have spent some time being educated in England [laughs].

AX: Is this sort of like your Eleanor Roosevelt accent?

WILLIAMS: Yeah, I basically whipped that one out again for a second viewing, because the people on the Eleanor Roosevelt movie paid for me to have an accent coach, whereas these people didn’t.

AX: Does your costume inform how you play Liza at all?

WILLIAMS: Yes. There was a period of massive physical liberation for women in the war, and I wanted her to be quite androgynous. I think Abby’s character [another scientist’s wife, played by Rachel Brosnahan] is the feminine housewife who’s wearing the hairdos and the nails and the lips and the great Forties movie star looks, and mine is the woman who gets to wear pants for the first time and cut her hair and be practical and not necessarily dressing to be feminine and appealing. She’s someone who dresses to please herself.

AX: Had you worked out in the desert before?

AX: With DOLLHOUSE, were you happy with the way the series ended?

WILLIAMS: I love the way it ended. I mean, Joss legendarily starts to adapt your character as the series goes on to how you really are, and I started off as sort of a calculating bitch and ended up being rather motherly and a bit of an alcoholic, and I can’t think where he got that from [laughs].With Joss, you just have to trust to the mind that’s greater than yours, so yeah, I just gave myself over to the Whedon crazy brain. I didn’t have hopes or fears. I knew it would all be all right, because he was writing it.

AX: How do you find DOLLHOUSE fans?

WILLIAMS: Yeah, I have a small but I would like to think significant part in the new [David] Cronenberg film, which did very well at Cannes, called MAPS TO THE STARS, and I made a very nice – it’s not nice, it’s scary – movie called ALTAR.

AX: Is there anything else you’d like to say about MANHATTAN right now?

WILLIAMS: Just the fact that people may not know where WGN is on their television [channel line-up], but it is there, and please watch.