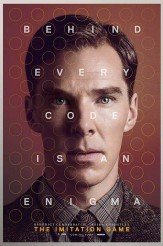 By now, it is generally known that, during WWII, the British set up a secret code-breaking unit in Bletchley Park dedicated to deciphering the messages put out by Germany’s Enigma Machine. Information once hidden under the Official Secrets Act also includes the fact that mathematical genius Alan Turing (played in the film by Benedict Cumberbatch) led the team of cryptographers at Bletchley. Turing had already invented the Turing Machine, which was the forerunner of the modern computer.

THE IMITATION GAME makes all of this quite engrossing, with very smart dialogue, a sense of urgency and a persuasive arc. There’s nothing like a world war to set the stakes high, of course, but Moore and director Morten Tyldum fill this world with a sense of grinding frustration, enthralled discovery and wheels within wheels – the movie isn’t all about espionage by any stretch, but when MI-6 occasionally shows up, it’s full of credible surprises.

The real Turing was believed to have had Asperger’s Syndrome. Graham Moore’s screenplay takes this trait, combines it with Turing’s understandable if sometimes jaw-droppingly expressed self-regard, and comes up with a number of wonderful scenes. These are smashingly played by Cumberbatch – it’s not a stretch to see him playing someone with an exceptionally brilliant mind, but his Turing has an innocence that both sets him apart from Cumberbatch’s other brainy Englisman and makes him unpredictable. We’re so used to Turing being impervious to everything except the work at hand that when he relaxes into normal human contact, it’s startling.

The film moves back and forth in time, so that we see sections of Turing as a 15-year-old (Alex Lawther) at boarding school, who shares a deep bond with one of his classmates. We also see Turing in 1952, when a burglary at his home leads to him being arrested and charged with “gross indecency,” as it turns out that he’s gay – a punishable offense at that time.

Here’s where THE IMITATION GAME thematically veers off its rails a little. What happened to Turing is appalling, and the movie rightly ends with a note of protest about the legal persecution of gays and lesbians. If the action remained within Bletchley Park and the film ended with a postscript about the vile injustice committed against Turing, this would be understandable. However, since the film spends a fair amount of time dealing with what happened to Turing because of his sexuality, it seems odd that neither the script nor Cumberbatch allow him to display a flicker of interest in anyone at all. If we weren’t told he was gay, from the way the film plays out, we’d assume he had no desire for any kind of human touch. This is cognitive and dramatic dissonance.

This aside, THE IMITATION GAME is both gripping and entertaining. Mention should be made of the rest of the ace cast, which includes Keira Knightley, Matthew Goode, Charles Dance and especially Mark Strong as the MI-6 representative. They’re all impressive in the service of a tale that is intelligent and informative