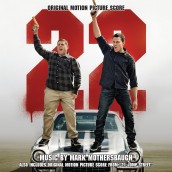 Everything is cop show score spoof awesome for Mark Mothersbaugh

Far from signaling film scoring Devo-lution, ex-cult rocker Mark Mothersbaugh has consistently proven himself as one of Hollywood’s most wackily animated composers, loading his work with hip retro samples, wacky rhythms and knowingly bombastic strings. It’s a child-like glee that’s often having fun with his assignments while satirizing them at the same time, an ironic, adrenalin sense of fun that most recently hit it awesomely big for filmmakers Phil Lord and Christopher Miller with THE LEGO MOVIE, a road of unabashed energy that began in CLOUDY WITH A CHANCE OF MEATBALLS. But Mothersbaugh’s most hilariously satiric work for the duo is definitely their two shots at 21 JUMP STREET and its delightfully unnecessary sequel 22 JUMP STREET, both of which have been collected by La La Land Records.

If a common musical (not to mention cinematic) problem with all of these TV-to-movie reboots is having older composers trying to show how “with it” they are for audiences who weren’t even embryos when these shows were on, then Mothersbaugh nails the hopelessly goofy quality of their scores at trying to be hip-hop modern. Wacky, out-of-shape synths, way-too manic electric guitars and thunderous strings rock out like an over the hill band. But that’s exactly the joke of these movies. You can feel the sweat flying off Mothersbaugh’s keyboards as he rags on every Bruckheimer-blockbuster score before him, yet with simultaneous affection that offers surprisingly good themes for action and romance amidst the patriotically trumpeting hijinks. His absurdist sound reaches even bigger heights of cop score portentousness in the even better sequel score for 22. Sure he might be playing a golf cart chase. But the charm in these JUMP STREET scores is that he might as well be thrashing on top of an army tank as it’s racing to save the world. It’s a musical joke that pays off with an energetically wacky wink where every cop score cliché he indulges in is awesome.