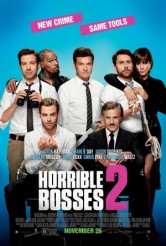 Not entirely horrible, but by no stretch boss 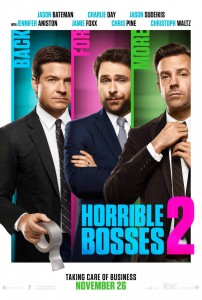 2011’s HORRIBLE BOSSES was a pretty funny if not always on-target riff on STRANGERS ON A TRAIN. HORRIBLE BOSSES 2 suffers in part because it’s not organized as a riff on anything in particular, and partly because a notable portion of its humor is based on racism, sexism and homophobia.

Apart from that, Mrs. Lincoln, the movie is a mixed bag. Our trio of buddies from the first film is back – reasonable Nick (Jason Bateman), overconfident Kurt (Jason Sudeikis) and hyper nebbish Dale (Charlie Day) – with a shower gizmo that, to their surprise, attracts a major backer. The seemingly too good to be true business offer from Bert Hanson (Christoph Waltz) is actually a trick, but by the time the boys find out, it seems too late. Nick wants to try to find some way to raise the money necessary to save their company in a logical, traditional way; Kurt and Dale have other ideas. Their ideas are so problem-riddled, to say nothing of illegal, that even Kurt and Dale have second thoughts, but at this point, things have been set in motion.

One could argue that the title of HORRIBLE BOSSES 2 refers to Nick, Kurt and Dale – they don’t know anything about running a company, hiring staff, etc. Hanson and his son Rex (Chris Pine) are horrible people, and they are bosses, but they aren’t the bosses of the main characters, so in that sense, they don’t really count. This may sound like griping about irrelevant details, except that the organizing principle of the first film was that each of the leads had a different horrible boss that led to the STRANGERS ON A TRAIN riff. Here, the lack of actual bosses lets the plot meander until there’s a need for a scheme – and then it meanders some more, because screenwriters Sean Anders, who also directed, & John Morris don’t have appear to know how to make events feel like they’re leading into each other until the climax.

It must be said that there’s a strong section where the plan is in play and then keeps devolving due to the mistakes of the characters that is well-structured and moderately amusing. Too often, though, we’re given the interaction between Nick, Kurt and Dale as though it’s intrinsically funny and instead it feels like an in-joke being pressed on a resistant outer world.

A good amount of laughs here come from some of the returning supporting cast from the first film. Jamie Foxx as (first name unprintable here) Jones, the gang’s underworld advisor, wins with his imitation of Bateman. Kevin Spacey is reliably and energetically venomous as an ex-boss. On the unfunny side, Jennifer Aniston is once again very game, though there’s not a lot that’s hilarious about rape, whatever the gender of the perpetrator. Pine shows that he’s capable of being decidedly unlike a starship captain, and Waltz is the epitome of cultured, charming evil.

HORRIBLE BOSSES 2 is another one of those movies that disproves one of Nietzsche’s famous sayings – it won’t kill you, but you’re unlikely to come out of the experience strengthened in any way.