Home » Under the Dome interview with showrunner Neal Baer Season 2

Interview: The scoop on UNDER THE DOME Season 2 from showrunner Neal Baer 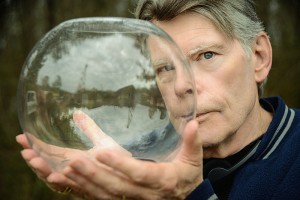 CBS’ UNDER THE DOME, based on Stephen King’s novel, begins its second season Monday, June 30 at 10 PM with an episode penned by King himself. The story concerns the small Maine town of Chester’s Mill, which is abruptly cut off from the rest of the world by a transparent dome that lets no one and nothing in or out. Viewers will recall that the heroic Dale “Barbie” Barbara (Mike Vogel) ended Season 1 framed for murder and about to be executed by despotic town leader Big Jim Rennie (Dean Norris). Without giving away exactly what happens, it can be said that there are several startling fatalities as Season 2 gets underway.

Executive producer/show runner Neal Baer is at a press session CBS holds for UNDER THE DOME at the London Hotel in West Hollywood. When the main Q&A ends, Baer remains available for more discussion.

ASSIGNMENT X: When UNDER THE DOME premiered last year, it was announced as a limited series. Were you prepared for the possibility of a second-season pickup, or was that a total surprise?

NEAL BAER: No. We always called it a “limited series,” but for us, as writers – and for the actors and the directors and the producers – we always hoped that it would be an ongoing series. We didn’t know how it would be accepted, so we had a way to end if it we needed to, but always in the forefront of our thinking was, “How do we keep this going for many years?” I did say that last year at various press tours, that I hoped, as E.R. was my first show and it lasted fifteen years, and [LAW & ORDER:] SVU is now starting its sixteenth year, that I would land on a show that had the ability to tell stories. I’ve been quite fortunate in my own career, but I do think that this show has that ability, because it is about human dilemmas that human beings face in living with each other.

NEIL BAER: Whether or not there was a reason for him to be driving there that day, other than to collect the debt from Julia’s [Rachel Lefevre] husband, and we’re going to find some very, very interesting connections with Barbie and some others this year that are shocking.

AX: For those who’ve read the book – is the Dome going to have been created by the same entities and for the same reasons that were presented in the novel?

BAER: No, we’re not doing that.

AX: So the explanation of why the Dome is over Chester’s Mill is completely different?

BAER: Well, I know what’s causing the Dome and I can parse out the answers over a period of time, and I think that’s what will give it longevity.

AX: If UNDER THE DOME goes for many seasons, how are you going to deal with the fact that your younger actors will visibly be aging faster than the timeframe of the story?

BAER: Well, the Dome can always age people as well. Certainly things can happen. We’ve talked about that. We were very nervous about Colin [Ford], because he plays Joe and he’s seventeen years old and how much is he going to look different? He doesn’t really look different this year, but they are growing up, he and Mackenzie [Lintz, who plays Norrie]. So I think we can handle that; that we’ll come up with some approach.

AX: Stephen King wrote the source material. What are some of the other influences that you have found, either from television or film or other books?

BAER: Everything is in the pot. For instance, last year, Mare Winningham’s character Agatha was killed when she fell off the boat and Big Jim didn’t save her, that was an homage to the movie A PLACE IN THE SUN where Montgomery Clift let Shelley Winters drown. We are all big old film fans, so there are many, many allusions to old films, Easter eggs for those who would like to find them. The insurance policy is an homage to the movie THE BIG HEAT, because I’m such a huge old movie nerd that I’m always trying to make some allusions – having a second chance is from VERTIGO – so we’re very influenced, not so much other TV shows, but definitely by old movies.

I have this passion for butterflies and caterpillars, so they’re just legion this year as well. I always liked them as a kid. This year, they take on very scary qualities. So it’s like I added the Stephen King twists to the butterflies. Last year, they were so beautiful. This year, it’s like, “Oh, my God, what are they doing?”

AX: Last season ended with massive cliffhangers. A certain percentage of the audience was like, “Hey, wait, I thought we were going to get the answer.” Is your plan to have a big cliffhanger at the end of this season as well, or will people feel like they’re going to have a sense of what the larger powers behind the Dome are by the end of the season?

AX: You’re bringing in one of your E.R. leading ladies, Sherry Stringfield, as an actor in UNDER THE DOME, and one of your erstwhile E.R. leading men, Eriq LaSalle, is going to be directing some episodes …

BAER: It’s because I adore Sherry, I love working with her and all of them, and so it is really fun. I said to Eric, “You’ll never believe who you’re going to be directing.” When I said, “Sherry,” he said, “I hope we have time, because we will laugh so much.” Sherry is the most mysterious character we’re introducing this season. You will see her in Episode One and – I can’t say anything else about that.

AX: When a regular character is killed onscreen, what is the conversation about that like with the actor playing the role?

BAER: Well, they understand that this is a show, and we’ve always been upfront, that nobody is safe. Another character meets a very untimely demise, and it’s shocking and horrifying, but it also makes you go, “Whoa, nobody is safe.” And I think that’s what’s really cool about the show.

AX: You’ve said that we may see some “dead” characters again. In what context?

BAER: As you recall, we saw Samantha Mathis [as Alice Calvert] come back as an avatar after [the character] died of diabetes. In Episode One [of Season 2], that we do have a character we all loved last year, who had an untimely death at the hands of Big Jim. So just because you may disappear some time in Season 1 – that’s what I love about the show – that doesn’t mean you might not pop up again, and we definitely have one of those actors from last year popping up again unexpectedly to torment Big Jim.

AX: Is there anything else you’d like to say about UNDER THE DOME right now?

BAER: I would say that the unexpected is really kind of the drive, but it all makes sense.

Related: Exclusive interview with UNDER THE DOME star Dean Norris on Season 2 of the CBS summer series