The Field of Blood review 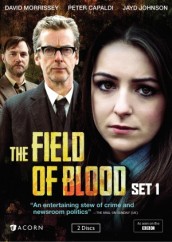 Both miniseries are divided into two hours and star Jayd Johnson as determined aspiring journalist Paddy (short for Patricia) Meehan, who starts out as a researcher but gets grudging approval from her editor Murray Devlin (David Morrissey) to accompany older reporter George McVie (Ford Kiernan) as he sits in his car, listening to the police band.

In the first case, Paddy is trying to prove herself in a time and place where sexism is rife, and has the further problem of a surprising personal tie to the case. In the second, two years later, Paddy’s established herself as a decent reporter, but the paper is getting new management with an anti-union bent that riles everyone, including Paddy’s father.

The circumstances of the primary murder in the first series are so awful (although the killing takes place off-screen) – child on child violence – that they make an odd contrast with Paddy’s more conventional career struggles. This seems more like a case for the protagonist of LUTHER or HANNIBAL’s Will Graham. If one can get past this – and everyone’s incessant reference to the normal-to-slim-sized Johnson as “fat,” which becomes a real irritant – the story is involving and it’s rather charming to see the characters pounding through their jobs with Eighties technology. Johnson has a lot of heart, Morrissey (the Governor on THE WALKING DEAD) has a becoming harried gruffness, and Peter Capaldi makes a strong impression as a senior reporter who takes Paddy’s side.

The second miniseries is a bit more topical, though a knowledge of, or at least interest in, U.K. politics is helpful. It’s done well, though the character of the incoming new femme fatale boss is on the stock side and the case, while serious, doesn’t have the surreal horror of the first one.

Even dedicated Anglophiles may wish to enable their subtitles, as although the characters are speaking English, some of those Glaswegian accents are formidable for American ears.

THE FIELD OF BLOOD won’t be for everyone, but viewers who like offbeat U.K. murder mysteries with a mix of lightness and darkness should overall be gratified.