GETTING ON with actress Niecy Nash – Exclusive Interview 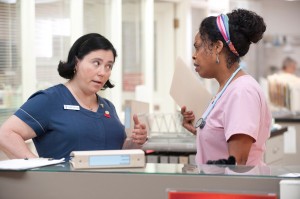 Actress Niecy Nash is having a busy time in the world of half-hour comedy. She’s currently in Season 2 of HBO’s GETTING ON, Sundays at 10:30 PM. It’s also been announced that TV Land’s THE SOUL MAN, which sees Nash playing the wife of series co-creator Cedric the Entertainer’s soul singer-turned-preacher character, has been renewed for a fourth season.

California native Nash, whose first name is pronounced Nee-see (her birth name is Carol Denise Ensley), has plenty of acting experience in the half-hour comedy realm, having played Deputy Raineesha Williams in eighty-eight episodes of RENO 911, as well as appearing in a multitude of other series and features.

On TV Land’s THE SOUL MAN, now in its third season Wednesday nights at 10:30 PM, former R&B star Boyce “the Valentine” Ballentine, played by Cedric the Entertainer, who co-created the series with Suzanne Martin, has given up show biz to take over his father’s ministry in St. Louis. His wife Lolli, played by Niecy Nash, is trying to get used to this major lifestyle change.

AX: How would you describe GETTING ON?

NIECY NASH: It’s about three women – myself, Laurie Metcalfe and Alex Borstein – and we take care of the elderly in a little rundown hospital. It’s a dark, delicious comedy that was an adaptation of a show on the BBC of the same name, GETTING ON.

AX: What is new for your GETTING ON character Didi Ortley this season?

NASH: Oh, my character has lots of fun things happening this season. She actually is going to become the head of the hospice care. She’s going to be the liaison between the doctors and the families. She has finished her phlebotomy class and is looking forward to a raise. And we get to see her sister this season, and she also ends up having a little crush on one of the doctors. A good time.

AX: If you’ve had experience with elder care within your own family, how does the show compare to your own experience? Is this something you wish you could have had for your family, or are you glad you didn’t have?

NASH: You know what? I think that there are so many moments in it that resonate with all of us in our real lives. It just depends on where it meets you. I try to find comedy in everything, so I’m glad that we can find it in this. I don’t feel so bad about it now.

AX: How about your character Lolli on THE SOUL MAN?

NIECY NASH: In the series, I’m a hairdresser. And I lived the very fabulous lifestyle in Las Vegas. And now suddenly my husband [Boyce, played by Cedric the Entertainer] is not a singer any more, but he’s a pastor, so I’ve become the First Lady of a church.

AX: Is that a switch that Lolli wanted, or did she get dragged along with it?

NASH: My character got dragged along with it, and art imitated life, because I used to be married to an R&B singer who became a pastor. And I had a church for two years. I was dragged along in that sense, too.

AX: In real life, what happened?

NASH: In real life, I decided to go and get a different husband.

NASH: The funny thing is that, in addition to being the First Lady of a church at one point in my life, I also was a self-taught beautician. So I did hair to make money while I was in college. So I just showed up to the job.

AX: Did the SOUL MAN writers base any of your character on you?

NASH: No. It’s a huge coincidence. It’s just God giving me a little wink, saying, “Look at that. All the trouble you went through, now it’s about to pay off.”

AX: Are you a singer as well as an actress?

NASH: I used to sing. I don’t so much any more. I don’t even put that on my resume any more [laughs]. I stick to the acting now.

AX: Is Lolli still feeling like a fish out of water?

NASH: She’s adjusted. She still has some challenges, but her legs are a little more steady in the world now.

AX: On the show, Lolli and Boyce have a daughter, Lyric, played by Jazz Raycole. How is playing a parent?

NASH: I’m a real parent, so it’s the same. You know what I mean? You love them and you want to wring their neck at the same time.

AX: And how is playing opposite Cedric the Entertainer?

NASH: I have the best TV husband ever. I really, really do. He is funny, he’s warm, very charming, and just an all-around fun guy. And even if I wasn’t his TV wife, we would be really good friends.

AX: Cedric was saying that over the time THE SOUL MAN has been on, the storylines have gotten a little bit less church-oriented and a little more people-oriented …

NASH: Uh-huh. Well, we’ve started to move around under the mantra that it’s better to see a sermon lived than it is to hear one preached. So it is all about your character and making the right choices and your decisions, and how those play out.

AX: Do you have a preference?

NASH: I liked it both ways as a performer. I loved it when we had our church and you got to be able to have the choir come in and sing and all of those things, but I also like the practicality and the life application that you get with the way the shows are structured now. So you get entertainment with a little breakaway.

AX: When you became involved with THE SOUL MAN, did you have a sense of what TV Land was in terms of its network identity?

NASH: I was familiar with TV Land, but now that I’m actually over there and have had the opportunity to work there for the last two years, I absolutely love it. I absolutely love the way they take care of their talent, the tone of the shows that they have. And it feels very old school. It’s like technology is carrying me so fast, but TV Land keeps me at a time when I was young and life was manageable, and all I had to do was do my homework and wash the dishes, and that was my biggest stress of the day, and wash the dishes. I absolutely enjoy it.

Nash also says at the Q&A panel for GETTING ON that she’s gotten positive feedback from the real nursing community. “In social media, I put something out on my Instagram when I think it was National Nurses Day or something like that. And I said, ‘I just wanted to say thank you to all the nurses out there. Playing you, you make us look good, and way to go, girl.’ And I got so many people who responded back to just say, ‘Thank you. You guys are hitting it on the head, and me and my friends all pick out which one of us is most like the characters you guys play. And thank you for bringing the levity, because it’s a hard job sometimes to see the sick and the afflicted all day and still keep your joy.’ So I found that the people who reached out to me really enjoyed it.”