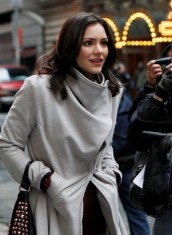 You can’t help wondering, sometimes, if SMASH creator Theresa Rebeck, who is also a playwright, has had more than one run-in with a movie actor. In “Publicity,” an episode she wrote, she’s got more fun and games going with Rebecca Duvall (Uma Thurman), the movie actress brought in to play Marilyn in order to attract investors and an audience.

But once again, the story line moves away from the show and more into the personal lives of the characters and you get the feeling that the show is vamping for time. In this case, Rebecca finds out – via our least favorite skank on the planet Ellis (Jaime Cepero) – that Derek (Jack Davenport) thinks Karen (Katherine McPhee) would be brilliant as Marilyn. So Rebecca cozies up to Karen and wows her with the public life of a movie star.

In the whole Julia (Debra Messing), Jerry (Michael Cristofar) and Leo (Emory Cohen) catastrophe, Leo runs away, telling each of his parents he’s with the other. It kind of seems like this might push Jerry and Julia together (which is to be hoped – this plotline is sucks so badly it could be a black hole). I do have to give some props. At one point, Julia tells her partner Tom (Christian Borle) what’s going on and when Leo does eventually turn up, there’s a terrific moment when Tom gets the news and just weeps with utter relief. Another reason why we need to see more of Borle.

But while I like what’s happening between Tom and Sam (Leslie Odom, Jr.), if the writers can’t keep the relationship based on what’s happening with the show, it’s not going to be that interesting a story line. And that is what makes this episode so very weak, ultimately.

There are some great moments in here. Derek has a meltdown and finally goes off on Rebecca. It’s classic and well-deserved and dang, who could imagine rooting for Derek, but you finally do in this scene. And while it doesn’t have anything to do with the show, it’s great that Dev (Raza Jaffrey) gets to strut some stuff in a Bollywood-inspired production number that features the entire cast. Who knew Jaffrey could dance? But it’s only a bright spot in another ridiculous soapy diversion in which Dev is acting like a jerk and moping because Karen is distancing herself, even though he’s pushed her away. And she has tried to include him. You’d think the writers have a fear of intimacy issue with their characters.

Back to the whole Rebecca problem – even after Derek’s meltdown, she’s still offering “ideas.” Her singing is getting better, but she’s still not a stage actor. I am wondering if they are going to deal with the biggest challenge most screen actors face when they get on stage – their performances are too pulled in and quiet, and unless they’re really good and/or had a lot of stage experience before they got big on film, most of them can’t project past the first row. Talk about some room for some drama. It may be a little too inside baseball, but I think it could work, if the writers are clever enough. They’ve already pulled off Karen’s problem out-singing the lead, so I don’t see why they can’t. At least that plotline would focus on bringing Bombshell to Broadway and not on some dreary dysfunctional relationship mess that really isn’t very interesting.