Home » Interview: Eva Longoria on the end of DESPERATE HOUSEWIVES 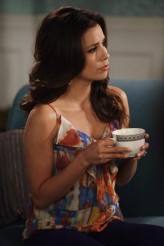 Interview: Eva Longoria on the end of DESPERATE HOUSEWIVES

Eva Longoria shot to fame in the first year of what’s turned out to be her eight-season run as well-to-do Gabrielle Solis on ABC’s DESPERATE HOUSEWIVES, which airs Sundays at 9 PM. The Texas-born Longoria, who has a Bachelor’s degree in science from A&M University, has a healthy film career outside of DESPERATE HOUSEWIVES – she’s in four features scheduled for release, including FOR GREATER GLORY with Peter O’Toole and Andy Garcia, THE BAYTOWN DISCO with VAMPIRE DIARIES’ Paul Wesley, THE TRUTH with Forest Whitaker and LONG TIME GONE – she also wrote a cookbook with Marah Slets entitled EVA’S KITCHEN: COOKING WITH LOVE FOR FAMILY AND FRIENDS. However, right now, she’s reflecting on HOUSEWIVES as it nears its final episode. Well, that and the new reality series Longoria is producing for NBC, READY FOR LOVE, which will premiere later this year.

READY FOR LOVE, Longoria explains, is a relationship show. “This has been a really fun labor of love. exploring the relationship format, and I’ve always been in love with love. So I was talking with NBC to produce some sort of relationship show years ago.  I just wasn’t really up to it until [fellow executive producers Jason Ehrlich and David Garfinkle] came along, and they brought this really contemporary modern format to relationships. So it was really appealing to me to be behind the camera and to help develop it with NBC.  We’ve been developing it for about seven months.”

In READY FOR LOVE, Longoria adds, “We have three awesome, eligible, handsome funny guys who are ready for love … who have my stamp of approval. I got to actually be part of the search acrossAmerica.”

Not that Longoria is setting herself up as a matchmaker: “I’m a horrible matchmaker!” Referring to the people setting up the dates on READY FOR LOVE, Longoria notes, “These are professionals. That’s the great thing about this show.”

Longoria’s Gabrielle has gone through a lot of changes on DESPERATE HOUSEIVES, as has her husband Carlos, played by Ricardo Antonio Chavira. Asked if she has a favorite aspect of Gabrielle, Longoria replies, “I loved Gaby’s evolution. You can see different sides of the character and [series creator/show runner] Marc Cherry’s done a really good job of giving me different colors to play. I loved early Gaby so much – she was so much fun and fans loved her. But I cannot imagine Gaby being that person for [all eight] seasons. That can get old. So I liked that she did go from being the selfish single model to a bad wife but married to bumpy to having kids, taking care of Carlos when he went blind – she’s had a lot of fun stuff. “

Longoria recalls the moment that she first realized the magnitude of DESPERATE HOUSEWIVES’ pop culture impact. “For me, it was when we were on OPRAH. Michael Edelstein [an executive producer on HOUSEWIVES from 2004 through 2010] said the audience on OPRAH doesn’t know who’s on the show. They just line up outside every day. When the audience was inside, the warmer-upper comedian guy goes, ‘Do you guys know’ – they’re hoping it’s ‘Oprah’s Favorite Things, first of all. So they’re a little disappointed [when that wasn’t mentioned]. But when he said, “We have the cast of DES-,” the audience went insane. He didn’t complete [saying], ‘DESPERATE HOUSEWIVES.’ He said, “We have the cast of DES-,” and they just went crazy. It was exciting to feel that energy from, basically, our audience. OPRAH’s audience is the women who watch our show and for me, that was overwhelming. I cried.”

Gabrielle and Carlos Solis were viewed as somewhat groundbreaking characters, in that they were a well-off Latino couple whose concerns were, like their neighbors, about romance, family and career, but not ethnicity. Of the public reaction to her character, Longoria says, “I’ve only gotten a lot of positive feedback from all viewers, Latin, white, black, Asian, and I think that has a lot to do with, Marc doesn’t hit you over the head that we’re Latin. We just happen to be one of the other families on this block. I am a proudLatina. I love representing my culture, but I love that it’s not in our accents. It’s not in the writing where, you know, we make tortillas every night. I’ve gotten a lot of people come up to me and just be really supportive in watching the show. And I tell a lot of Latinos to watch any show that has a Latino on it, because it’s not so much that we’re playing a great part, which we are, but if Latinos want to increase [onscreen presence] in television and film, they have to support the shows that have Latinos on them. I haven’t really been singled out, just an overall support from our community. I bring Mexicans all the time to casting. Marc, if this was reality, I’d have a lot more cousins and aunts and uncles,” she laughs.

As far as the marriages on DESPERATE HOUSEWIVES home turf ofWisteria Lane, Longoria opines, “Our marriage is the strongest. There’s nothing surprising about Carlos and Gabby and their relationship, they’ve just kind of been through everything, up and down. He’s been in jail and blind and in rehab.”

For most of its life on the air, DESPERATE HOUSEWIVES was a top-rated and therefore closely scrutinized series, with its stars followed by the mainstream entertainment press and tabloids alike. Asked about what that kind of intense attention felt like over the years, Longoria starts with a joke. “Well, it might have been my garbage man …” She laughs. “I’m just kidding. But, you know, [the cast] were talking about this earlier, about when we started eight years ago, television has changed so much from when we first aired for a television, [when]  a scripted show [got] 25 million viewers and the critics loved us. And then we got some knocks for certain episodes or certain lines about things. I give kudos to Marc Cherry and ABC because they’ve pushed the envelope at a time where ABC could take a risk of doing something different. And I think you see that pattern now with the shows that ABC’s trying to do or wants to do, is they’re going to take risks and some pay off and some don’t. But I rather them be loud and I’d rather you just fall on your face and be behind something, which is what we did. We were loud. I mean, they did us loud. I remember going into the dry cleaning and our faces were on the [plastic wrappers]. And then I went to Ralphs and we were on the shopping bag. And then I was, you know, on the street and a flyer flew by and it was our face and I go, ‘Agggh.’ You couldn’t escape it. So if we failed, we would have failed in a big way. And I like that ABC did that [type of publicity] and that they continue to do that with the new shows that they’re trying to launch.”

At the table read for the final DESPERATE HOUSEWIVES script, Longoria says, “We were a mess. I mean, everybody in the table read bawled – producers, writers, actors. Felicity [Huffman] and Marcia [Cross] and I stayed after the table read and probably cried for an hour with each other just talking about this amazing ride we’ve been on.”

What does Longoria think she will miss most now that DESPERATE HOUSEWIVES is coming to a close? “Oh, my gosh. Well, I know I’m going to miss the family that we’ve created, not only here on the cast, but our crew. We’ve had the same crew for eight years – the camera guys, the boom guys, the craft services, the grips, and we’ve been through so many journeys together, marriage and babies and cancer and divorce, so much. So those everyday faces you see, that’s probably what I’m going to miss.”