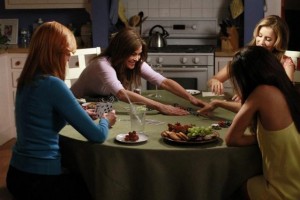 After eight seasons, ABC’s drama-with-comedy DESPERATE HOUSEWIVES concludes its run tonight, Sunday May 13, with a special two-hour episode that begins at 9 PM.

Marc Cherry, the show’s creator and executive producer, talks about various aspects of DESPERATE HOUSEWIVES over the years, as well as how long he’s known how it would end and what to look for in the final episode.

ASSIGNMENT X: The friendships between the women of Wisteria Lane are deep but tend to be very conflicted …

MARC CHERRY: One of the things that I learned on THE GOLDEN GIRLS is you want your ensemble of ladies to be very close and very friendly, but it gets a lot funnier if they’re in conflict, so we’ve decided to have them in some conflict.

AX: How did you feel about DESPERATE HOUSEWIVES Season Three, when you had to change some story elements due to real-life events?

CHERRY: You know what? I was pretty darn pleased with it. We got a curve thrown to us when Marcia [Cross, who plays Bree] got pregnant, and that kind of screwed up some of my storytelling – I had to hurry up and end her storyline in February, but other than that, I was pretty pleased. I thought it was a much more coherent year and I thought it was much funnier. And my goal is always to have the storylines be just as smooth and the humor to be there, but also to go deeper. That’s always my goal, to push myself to say more.

AX: Tell us about the origins of Bree …

CHERRY: Dana Delany came in for the original auditions for Bree and she gave a fantastic audition. I offered her the part three times. She turned it down three times. Marcia was my second choice and the reason Marcia was my second choice was knowing Marcia played Bree, she played Bree kind of oblivious. Dana’s was a much more sly Bree, and that’s the character that I thought I wanted. Dana, for reasons that I still don’t understand, decided to pass on the show. I said this to Dana – the interesting thing is, the way she performed it, is she came in and told me at the first audition, “This character’s just like my mother.” Which of course made me laugh, because I wrote it based on my mother. And my mother, although she’s a very sweet woman, has kind of a sly sense of humor, and that’s how Dana performed it. So Dana really captured that exact quality.

Marcia, who is the first to tell you, “Oh, I’m not funny, I never get the joke,” her Bree was kind of oblivious to her own Bree-ness. Interestingly enough, when we went forward with the show, suddenly I went, “Oh! That’s the quality – let me do it that way.” And it became in a way a much funnier character than I had originally envisioned. And [the Katherine] character came along, she has a lot of alpha female things and a lot of slyness and some kind of darkness. I thought, “You know what? Let me take another shot at Dana.” And so I came back begging, and I think there were some threats involved, and I lucked out, and we got Dana. Dana Delany’s character [was] very much an alpha female who really went up against all our women, and especially Bree. It [was] very happy and I feel like, “Good, I’ve got Dana, I can put that demon to rest.” 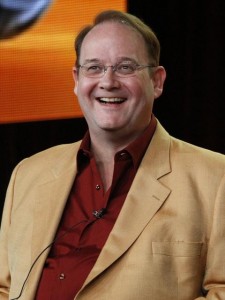 CHERRY: I did not know when I cast them. I suddenly found out – people were going, “You know, they’ve worked together.” I became aware of Nathan Fillion through SERENITY, which was written by Joss Whedon. I worked with Joss’ dad Tom Whedon on GOLDEN GIRLS, so I’ve always followed Joss’ career, just because I knew his dad so well. What was funny is, when they said, “Nathan Fillion,” I didn’t know who he was. I just remembered, “Oh, there was that really cute guy in SERENITY.” So they introduced us and we got to hang out and he’s one of the nicest guys in the world, so I said, “Come play with us.”

AX: You began Season Five by jumping the story five years forward. Did that work out as you had hoped?

CHERRY: You know, it’s funny. The five-year jump, I really kind of took a risk on that and for me, artistically, it paid off beautifully and it really reinvigorated the show. We’ve always done – not always, but we occasionally do little time jumps – I think we did a six-month time jump and a one-month time jump at the beginnings of seasons. I wouldn’t do anything quite as extreme [again], and one of the reasons is because the big people that are affected are the children. Because you can put glasses on Eva [Longoria, who plays Gabrielle] and say she’s a couple years older, but with the kids, that becomes a wholesale change. I love the little ones that we had starting out with the show [who had to be recast due to the time jump], but some of the ones that are teenagers I wouldn’t want to say goodbye to.

AX: Can you talk about adding Vanessa Williams as Renee Perry to the regular cast at the beginning of Season Seven?

CHERRY: One of the things I’ve learned over the evolution of the show is that a lot of different talents are required to be on DESPERATE HOUSEWIVES. You have to be able to do both drama and comedy. For the drama, you have to have a twinkle in your eye and the comedy has to be very rooted in reality. And over the years, I think some of the additions have been more successful than the others. What was interesting was, the idea for this came from [then-ABC executive] Steve McPherson. He never, ever suggested casting to me. And he called me [in 2010] before I was going on my yearly two-week vacation in New York, and he said, “Hey, what about Vanessa? Because UGLY BETTY is ending – what about her?”

I at first was very skeptical, because she was just coming off another ABC show and that hadn’t really been on my radar, and so I said, “Well, let me meet with her.” And so I walked into a restaurant in New York with my arms crossed, and about halfway through I just fell in love with her and I found what was so great about her is, she really got the tonality of the show. I knew she was capable of doing some wicked comedy based on her performance in UGLY BETTY, but what really struck me was her understanding of what it is we did here, and I was convinced amazingly quickly and – just a little piece of trivia – it was the quickest deal in the history of DESPERATE HOUSEWIVES. I met with her for lunch on Thursday and her deal was closed by Tuesday morning, before ABC’s [upfronts for the advertisers] presentation. I was like, “They closed it? Of all the deals we’ve done in the past that went on for weeks and weeks and weeks, this one just happened.” And that was due both to the fact that Vanessa really wanted to be on the show and ABC really wanted her to be on it. So it was just kind of a dream come true and it’s been delightful ever since. 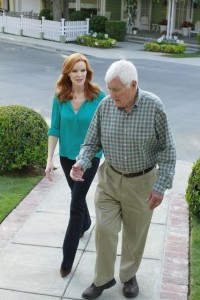 AX: How did you approach writing the final season?

CHERRY:  I absolutely [have known for years] the last scene of the show. And what’s funny about that – I give nothing away. I’m a big fan of the HARRY POTTER books and a big fan of J.K. Rowling’s. I kind of identify with her a little bit, because she was kind of really pretty low, and then all of a sudden, she found this massive success and I certainly went through my own version of that, and I love the fact that she said she always knew the last chapter of the HARRY POTTER books, and that got me to thinking about how I wanted to end the show, literally in Season One. So I very much have it all mapped out in my head, so when we knew it was the last season, I [told] all my writing staff, “Okay, here’s what we’re writing to.” And then we built that last season accordingly.

AX: So will they all be working in the Ministry of Magic at the end?

AX: You’ve written two new pilots. Did you want a breather after DESPERATE HOUSEWIVES, or are you eager to start right away on something new?

CHERRY: On one hand, it’s like wearing your favorite old coat. And I love this old coat; it is so comfy. But there is that voice in your head as a writer going, “Do you want to try some new stuff before you die?” And one of the things that was hard about doing HALLELUJAH is, that was culture shock, because I was writing a Southern idiom, but it was ultimately very fulfilling, because it was like, “Oh, good, I actually am able to write something else.” And then I’m [working on] DEVIOUS MAIDS, and that’s a whole different kind of tonality and I had a really good time with that. So you know, the truth is, you are excited to try new things, but there’s something awful comfy [about DESPERATE HOUSEWIVES] – I know these characters and these women really well now and I think I know how to please them when I sit down, so I’m going to miss that, definitely.

AX: In all eight years of DESPERATE HOUSEWIVES, have you ever thought about casting yourself in a cameo?

CHERRY: You know what? I think what I’ll probably do is, on the final episode of DESPERATE HOUSEWIVES, I’ll make a little appearance somewhere, my little Alfred Hitchcock. I can’t do it before then, because I’m just swamped, I’m always writing. But it occurred to me just to put myself in that world. I want to see myself on Wisteria Lane. So I’ll probably play a mailman or a milkman in the final episode. Something like that.