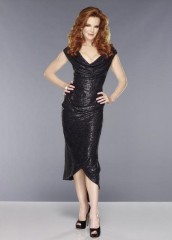 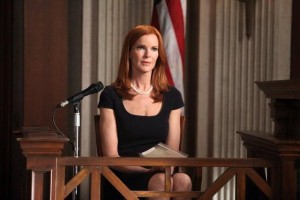 If a take on the set of DESPERATE HOUSEWIVES is interrupted by a ringing cell phone, you may be sure that the offending sound will not be the fault of actress Marcia Cross. Not that she won’t pick up – you just won’t hear it first.

“Mine’s on silent and I answer it,” the actress laughs. “It doesn’t have time to ring.” This may be because in real life, Cross is the mother of two young children and, like most working parents, wants to be no more than a phone call away should they need her.

Cross, a native of Massachusetts, has been on DESPERATE HOUSEWIVES from its 2004 beginnings as the prim and proper Bree Van De Kamp Hodge, who finally has begun to let her hair down socially and sexually as the years progressed.

Like her colleagues, series creator Marc Cherry and actresses Teri Hatcher, Felicity Huffman and Eva Longoria, Cross has bittersweet feelings about the end of DESPERATE HOUSEWIVES, which airs on ABC Sundays at 9 PM, after eight eventful seasons. Among the things she’ll miss, Cross points out, is proximity to Cherry. “He lives right next door.”

This is almost literally true – the Wisteria Lane set, an actual cul-de-sac constructed at Universal Studios in North Hollywood, is walking distance from Cherry’s home.

Cross will also likely miss the hot romantic scenes she got to play as Bree. Recalling her onscreen romance with Brian Austin Greene, who played Bree’s hunky blue-collar boyfriend Ben in Season Seven, Cross first says jokingly of Cherry, “He made me do it!” Regarding Greene, she adds, “I started blushing whenever we acted together. Seriously. We did a scene and I was just like, ‘He’s touching me …’ I’m like,” she indicates blushing and re-enacts a nervous, “Hunnh.”

As far as what Cross would like to do in the last episode, she says, “I made a joke that I wanted to walk around in a bikini.” She looks pointedly at Cherry. “But it was a joke, so do not put that one in there, thank you.”

The actress isn’t particularly keen to talk about the end of the series before it occurs. “I know,” Cross agrees when Huffman notes that discussing the finale ahead of time is like having a funeral before a death.

Cross is, however, willing to compare DESPERATE HOUSEWIVES to her previous gig on MELROSE PLACE, the nighttime soap in which she played the unstable Kimberly Shaw from 1992 through 1997. She uses famous artists as an analogy. “I’ve always said – what comes to my mind, and I don’t know if this is legitimate or not, but I thought of MELROSE PLACE as like Andy Warhol and I think of this as like [the paintings of Wassily] Kandinsky or Francis Bacon. One [MELROSE] was like pop art – not that Andy Warhol wasn’t a genius, but it was like of its time and very famous, but this [HOUSEWIVES] is much more complicated and rich and interesting.”