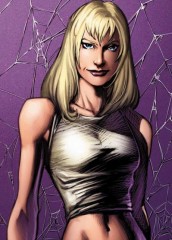 In THE AMAZING SPIDER-MAN hitting theatres, Peter Parker (Andrew Garfield) doesn’t have a familiar red head as his number one squeeze. Mary Jane Watson is not the object of his affections this time around, and instead we have Peter’s first love from the comics Gwen Stacy (Emma Stone). Gwen or Gwendy as she is often called was played by Bryce Dallas Howard in a sort of botched attempt to introduce the character into the film continuity in SPIDER-MAN 3, but that wasn’t the actress’s fault – that movie just had far too many problems.

So now that new fans are getting to know Gwen on the big screen, it’s time for ASSIGNMENT X to visit some of the more memorable moments of this character’s comic book existence over the years. Gwen has been far more than a tragic fall and a short *snap* that forever changed the face of comics; she’s been a bit of an institution in multiple realities and storylines. So let’s take a look at some of the more interesting moments across the Marvel Comics multiverse.

When Gwen first showed up on the scene she was kind of a bitchy, aloof character. She was interested in Peter Parker, but he was always running off to be Spider-man (unbeknownst to her) so she viewed him as rude and flaky and a waste of time. Later on of course the two became quite the item, and Gwen was adored by readers.

The 1960’s Spider-man was one part hero story, one part soap opera (and let’s be honest it still is to this day). In the great comics of yesteryear penned by Smilin’ Stan Lee, Peter and Gwen would have fights over simple things and then end up in each other’s arms by the end of the story. Not so after Gwen’s dad was killed in the crossfire of a fight between Spidey and Doc Ock. Captain Stacy gave his life to save a child from falling debris and was crushed. Gwen started her active “I hate Spider-man” campaign and ended up leaving the country. But of course she returned issues later and Spidey got a happy ending.

3. The Death of Gwen Stacy

One of the most monumental moments of comic history, Gwen being pitched off the Brooklyn Bridge by the Green Goblin sounded the end of innocence with a simple *snap*. Spider-man inadvertently kills his own girlfriend by snagging her with webbing and not taking into account her velocity as she fell. For the first time in comics a superhero’s girlfriend could die…and not just die…be killed by the hero. This was the end of the Silver Age of comics.

So Gwendy shows up in a series of panels over the course of a few issues of AMAZING SPIDER-MAN, even causing Aunt May to collapse after seeing her. Finally in a one page splash at the end of issue #144 Peter opens his apartment door revealing Gwen Stacy alive and well?! Gwen was actually a clone and this was a part of the first clone saga, which would loop around and bite readers in the rear in the 1990’s….but at the time it was a clever and confusing way to mix-up the Spidey universe for a bit.

5. Gwen and Peter get Married

In WHAT IF? #24 the question is answered where Spider-man saves Gwen Stacy and she doesn’t die. Gwen makes peace with Peter and his alter ego and they get married…of course it goes south soon after but they do have a nice happy moment. So imagine if this had been normal continuity. The heads of Marvel retconned back to the 80’s to dispose of Spider-man’s marriage to Mary Jane Watson, deciding that having a married Spider-man made the character too old and unapproachable to new young readers. Just figure how much would have to have been wiped if he had gotten hitched in the early 70’s!

So Gwen was resurrected for the Ultimate Universe in 2000. This time since everything was a bit more modern and edgy, so was Gwen. Now she was a switchblade carrying semi-goth who doesn’t take s**t from anyone. Of course she gets involved with Peter, but she’s not the sweet innocent victim girl next door like last time…but that doesn’t stop #7.

So once you knew Gwen was a part of this universe, you couldn’t help but wait for her to kick off. And she did. In a big and horrible way. Gwen is this universe is sucked dry by Carnage (which is this reality is a creature made from a sample of Peter Parker’s blood, his Dad’s DNA, and the Venom suit all made into a nasty kind of vampire. Gwen gets sucked dry by this critter and her husk is left on Aunt May’s lawn. Yeesh. Girl can’t catch a break.

8. Resurrection of Gwen in Ultimate

Of course Gwen came back. Not as a clone, but as Carnage itself. After some kerfuffle here and there, the Carnage creature is absorbed by Eddie Brock, leaving behind a perfect Gwen Stacy who is now alive, normal and needing a place to live. She ends up staying with Aunt May and Peter and even outlives him in his own series this time around!

In THE HOUSE OF M, a major crossover where the Scarlet Witch changed reality so mutants were in control of the world, Spider-man is famous and everyone knows he is Peter Parker. Aunt May and Uncle Ben are alive and well, and Pete is married to Gwen and they have a kid. There were some really nice moments in this mini-series showing what could have been and what Peter in his heart of hearts always wanted.

In THE AGE OF APOCALYPSE, the entire world was held in the grip of evil mutants. Peter Parker never became Spider-man and Gwen was a human aide relief worker in Wakanda. She’s terribly handy with a gun and kills off a few bad guys including Norman Osborn in the first issue she appears in, and since there is no Peter in this reality she seems to have a thing for Dr. Donald Blake. Tough Bitch in this reality.

J. Michael Straczynski did some good with Spider-Man, but he branded Gwendy a whore for all time; creating a storyline where she had kids with Norman Osborn (right under Peter’s nose). Even though she and Pete never got intimate Gwen was more than OK with banging a guy her Dad’s age and the Green Goblin to boot. Her kids age rapidly and return to try to kill their “father” who they think is Peter. The storyline would have been a LOT better if the mom hadn’t been sweet innocent Gwendy.