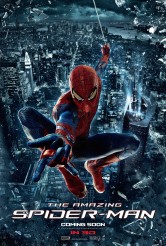 More agreeable and appealing than outright amazing, but that’s fine

THE AMAZING SPIDER-MAN is a lot of fun. It’s sweeter than its predecessors, with Andrew Garfield as a kinder, warmer Peter Parker and Martin Sheen making a much bigger impression than we might have expected from Uncle Ben. If the movie doesn’t quite live up to its title, remember that, reboot or no, this is the character’s fourth big-screen outing in ten years. It’s a perfectly watchable Spider-Man feature, which beats the hell out of what it could have been – i.e., the it’s-too-soon-enough-already Spider-Man.

In THE AMAZING SPIDER-MAN, the script by James Vanderbilt and Alvin Sargent and Steve Kloves redoes the character’s origin story, introducing us to Peter Parker as a little boy whose parents Richard and Mary (Campbell Scott, Embeth Davidtz) must flee an enigmatic but deadly threat that seems to have something to do with Richard’s research.

Peter winds up being raised by his dad’s Uncle Ben (Sheen) and Aunt May (Sally Field). As a teenager, Peter (Garfield) finds some of his dad’s old chemical formulas and begins doing some research of his own that leads him to Oscorp, where erudite, one-armed Dr. Curt Connors (Rhys Ifans) is embarked on a quest to enable mammals to regenerate limbs the way lizards regenerate tails. Peter backs into the wrong room, gets bitten by a spider and soon finds that he has some interesting new talents. At the same time, he and schoolmate Gwen Stacy (Emma Stone) fall for each other. At first, Peter uses his newfound powers to give bullies a comeuppance, but when tragedy strikes and Peter holds himself responsible, he gets a new sense of purpose. At the same time, the situation at Oscorp forces Dr. Connors to take extreme measures.

Much of THE AMAZING SPIDER-MAN is outright charming – the sequence where Peter discovers much of what he can do has wonderful slapstick that is timed perfectly, brisk enough to not congratulate itself on its moves but at just the right speed for us to catch all the moves. Director Marc Webb gives the proceedings a sense of joy that we didn’t even know we were missing until it shows up here. Yes, with great power comes great responsibility, but that doesn’t mean that one can’t admit that swinging from building to building is a blast.

As THE AMAZING SPIDER-MAN is set in Manhattan, some of the sequences with the unfortunate Dr. Connor on the loose are reminiscent of the 1998 remake of GODZILLA, though if the filmmakers aren’t worried about comparisons to Sam Raimi’s SPIDER-MAN trilogy (2002, 2004, 2007), they’re probably not concerned about similarities to an even older film. Still, there’s a sense of something old-fashioned here – the villain is large but not especially strange or scary-looking, though his original good intentions give him tragic scope.

A large part of the reason to see the film isGarfield’s performance, which is naturalistic and humanistic. He and Stone have good chemistry together, and Stone is charming in her own right. The film also gives Gwen a lot to do, including some heroics. Ifans is affecting as Connors, Denis Leary is well-suited to playing the exasperated NYPD captain who has to deal with large amounts of weirdness and Field makes Aunt May properly redoubtable.

If one can see past all the hype, legacy and comparisons, THE AMAZING SPIDER-MAN is simply a good time at the movies.