The co-showrunner talks about joining the J.J. Abrams-produced series 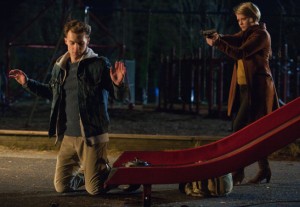 In Fox’s new series ALCATRAZ, which has its first-season finale tonight in a two-hour block beginning at 8 PM, San Francisco police homicide Detective Rebecca Madsen (Sarah Jones) notices something strange is going on when the fingerprints of a man who supposedly died fifty years earlier show up at a homicide scene. She subsequently learns that Alcatraz Prison, where the suspect had been incarcerated, was actually shut down because all of the inmates vanished suddenly; they are now showing up in the present.

If viewers have noticed a slight change in tone around Episode Seven of ALCATRAZ, executive-produced by J.J. Abrams, this may be explained by the addition to the series’ staff at that time of show runners Daniel Pyne and Jennifer Johnson.

ASSIGNMENT X: Had you worked with J.J. Abrams before?

DANIEL PYNE: No. Jen had.

AX: What about ALCATRAZ appealed to you?

PYNE: I saw it. I was able to look at the six episodes they had shot and it was kind of extraordinary. It was a show I had never seen before. I hadn’t been doing television for a long time, I’d been doing features [ANY GIVEN SUNDAY, THE SUM OF ALL FEARS, THE MANCHURIAN CANDIDATE remake]. It felt a little feature-like, but the storytelling, the narrative, the challenges of doing flashbacks that were like short stories, the challenge of doing procedural elements, all those things really seemed like something you could sink your teeth into, something that was really good and worth making better.

AX: How do you and Jennifer Johnson divide the show-running duties?

PYNE:  It’s kind of seamless. We cover for each other when we need to, we discuss everything beforehand, we try to be of a single mind, but because there are two of us, we cover more territory. Storytelling-wise, we come from different angles on it, so we can get different perspectives on the show. We cast together, we cut together and it’s been a wild ride. 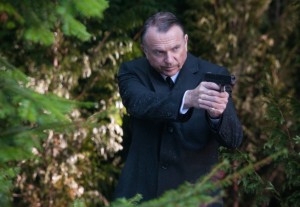 AX: How difficult has it been dealing with how much info you give on the prisoners?

PYNE: We try to keep the inmates as mysterious as possible and not focus on them. We have enough territory to cover just dealing with our main characters and dealing with the back story. It’s hard to say. It just depends on the bad guy of the week. Sometimes we see them interacting with the world; sometimes they’re antisocial psychopaths who don’t interact with the world. Sometimes they’re completely mysterious and we don’t know what they’re doing with our [main] characters.

AX: Are all the guys really bad guys, or are there more innocent guys like Jack Sylvain?

PYNE: For now, mostly bad guys. The thing is, most of the inmates at Alcatraz were bad guys. They weren’t guys who were like Jack Sylvain, the guy in the pilot who was innocent, who then committed some crime in prison, so you could sort of see he had a reason [to feel he’d been wronged]. Most of the guys in Alcatraz who were hardened criminals who were sent to Alcatraz from every prison because they were uncontrollable. It was maximum security, like a super-max prison [is] in this time.

AX: Is joining a series on its seventh episode at all like trying to jump onto a moving train?

PYNE: It’s a little like doing a production rewrite in movies, which I’ve done a lot of, but different because there are more parts here. It’s jumping onto the middle of a train that’s going,, and then trying to figure out what’s working and what’s not, if there’s a problem, or how can you make the train run better? And it’s a number of stories all at the same time, whereas if you do a production rewrite on a movie, it’s one story.

AX: Do you have a favorite element of ALCATRAZ the series?

The following material from Daniel Pyne took place at Wondercon 2012 during roundtable press discussions on ALCATRAZ as he explains what ALCATRAZ Season 2 would be like if the series is renewed.

“The structure would be similar — we love telling these short stories in flashbacks,” says Pyne. “It’s the active nature of tracking people down. After we answer the initial questions, the storytelling possibilities open up – and there are more places to go in the present, rather than everything being back story. Now we can concentrate going forward and the relationships, not just between our core character, but as the inmates come back, we like to think how they have conflicts and how they’re playing out in present day.”

For more information on what Season 2 would be, click on the related link below.

Related Link: Exclusive Interview with ALCATRAZ star Jonny Coyne on the Season 1 finale and beyond

Article Source: Assignment X
Article: Exclusive Interview with ALCATRAZ producer on Season 1 and what Season 2 would be