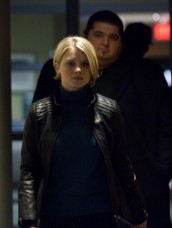 We find out what’s behind the mysterious door but does it pay off? 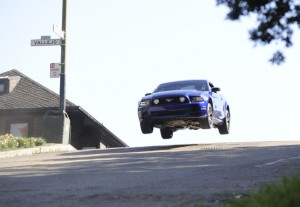 That’s pretty much what we learned on the season finale of ALCATRAZ “Tommy Madsen”. Warden James (Jonny Coyne) has sent inmates from The Rock (and maybe other places) all over the U.S.

Why he is sending these people to the present day – some 50 years into the future – is unclear. It actually is even less clear than when the whole series began, which in a season finale may not be the best approach. And if the series is not renewed by Fox for Season 2, pretty much the entire series will go down as an epic fail for such a move.

From the beginning of the series there have been a number of things that the Alcatraz crew has been racing to uncover. First, why these inmates are returning. While at the beginning of the series and subsequent episodes it was to gather keys. Keys that unlock a secret door – Door No. 1 as I have dubbed it – that holds something very important to the entire reason for them returning. Second, who sent them from the 1960s to 2012 and third, to stop the inmates from doing bad things as they return. 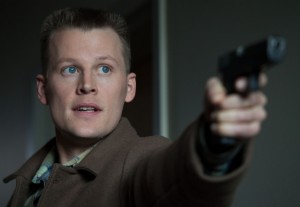 Turns out, we still have no idea why these inmates are returning, or how they returned. As for who, all signs point to Warden James (Jonny Coyne) as he seems to have orchestrated this entire plan but again why is another story. Is it for more gold? Is it for power? Chaos? We have no idea.

So, the entire series has been about Door No. 1 and the keys and when they finally crack the door open *spoilers* stop reading now – it is a control center for tracking the inmates?! Seriously? Seriously.

So why did inmates that have already “jumped” to the future want to get into a control room that tracks their movements when they are already there and know where they are? Better yet, why would the warden want to get back into his own control room so bad if he knew he could just send Tommy Madsen to round them up? Did he lose track of them all? Are they planning a prison reunion? I don’t get it.

Now, we did get some answers to some of the other questions that have cropped up. Namely why Tommy Madsen (David Hofflin) has been a key part to what has been happening including his blood transfusion that gave him some super healing powers or something. And his allegiance to James because of the warden giving him a second chance to be free.

We also learned how Ray Madsen (Robert Forester) got off The Rock before the events went down as well as his falling out with his brother, Tommy. And why Tommy killed Rebecca Madsen’s (Sarah Jones) partner because he was on the take.

But again, the big reveal of what’s behind the door (which was arguably the selling point for the entire series and the biggest mystery so far) just fell short. I’m not sure what I was expecting inside – maybe a secret time traveling chair or some alien dude that uses his technology to teleport people or a wormhole to 2012 or something. I don’t know. But I certainly wasn’t expecting a lame map with highlighted buttons showing where all the inmates landed once they jumped.

And what was the whole point of having Hauser (Sam Neill) try to get Lucy (Parminder Nagra) out of the country? So she wouldn’t be hunted any longer? And why is the military in on the secret that Alcatraz inmates are returning but not overly concerned considering they are leaving it in the hands of old man Hauser?

And don’t even get me started on the jumping the shark “death” of Rebecca Madsen at the hand’s of her grandfather. Did Jones get a new gig and they figure they would just start fresh if there is a second season or will we get a “Who shot J.R. dream sequence” to bring her back?

Like I said, if there is no Season 2, ALCATRAZ will be pretty much a waste of damn time. Even if it does, I’m not sure they can salvage things after killing off the main character (assuming she stays dead) and screwing the pooch on the mysterious door.

Other things we learned in this episode of ALCATRAZ: