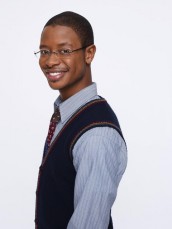 The actor talks playing a caregiver and working with Eric McCormack 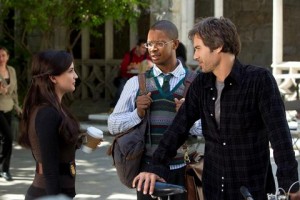 In TNT’s series PERCEPTION, which has its first-season finale tonight, Monday Sept. 17 at 10 PM, Eric McCormack plays Dr. Daniel Pierce a college professor who is brilliant but has schizophrenia so severe that he sees and has conversations with people who aren’t there. For someone who has problems like this, it’s a good idea to have a friend around who can help with day to day life, not to mention psychiatric/medical emergencies. That’s where Arjay Smith’s character Max Lewicki comes in; as Daniel’s sometime student and full-time friend and caregiver, Max is there to make sure that Daniel’s world stays on a more or less even keel, even when Daniel cannot.

Smith, whose first name Arjay is pronounced like the initials R.J., hails from Redlandsin Southern California. He began acting before entering his teen years, and has appeared as a regular on NICK FRENO: LICENSED TEACHER and THE JOURNEY OF ALLEN STRANGE, had recurring roles on THE BERNIE MAC SHOW, MALCOLM IN THE MIDDLE, NYPD BLUE and 24, along with many other credits. In an interview following a panel discussion about PERCEPTION during the Television Critics Association press tour, Smith says that, as an African-American, he was bemused but pleased to find himself reading for a character whose last name is Lewicki – and also pleased by the show’s enlightened view of mental illness.

ARJAY SMITH: [laughs] I was surprised when I read the script by last name – Lewicki, which is a Polish name. I would say that would be the most interesting thing right off the bat personally. [The casting] was definitely open to all. It was pretty much who just went in there with the chops to bring to life Max Lewicki, and I was able to do that. That was awesome. But when reading the script, the fact that [Daniel] was schizophrenic was not a turn-off in any way. Actually, I thought it was pretty brilliant, because in most shows, schizophrenics are portrayed as being crazy murderers. Eric’s character is not that. He’s schizophrenic, but very passionate about people’s feelings. He has a good heart. And so I don’t think it was a turnoff at all. It wasn’t a negative in reading it. I think this can be very interesting as far as the journey of this character and my involvement with him, as far as, I’m his voice of reality.

AX: How did you see Max as a character when you started? How involved is he in dealing with Daniel’s issues and how involved is Max with trying to get though his own life?

SMITH: In Season 1, the back story is revealed of me and Daniel Pierce, how our relationship was started. Max is a very educated guy as well, so he knows a little about neurology. Just in the simple fact that he knows how to deal with Daniel on a psychological level and a spiritual level, a physical level, he understands what he’s going through, definitely [is] a part of this. You have to have a little understanding of the science of neurology and what it’s about. It plays a part in how I play my character as well, just because you have to really know what you’re doing.

SMITH: Initially, going in, I did not do any research too much for the role as far as the neurological side. On the caring side, I mostly studied my mother, because she’s very nurturing and Max Lewicki is that. He’s a strong nurturer, he has this protective demeanor over Daniel, so I just kind of studied my mother in that regard.

AX: There’s a line in the first episode where Daniel says, “Have you seen how many times Lewicki has changed his major? I’m not worried he’s going anywhere.” Do you know what Lewicki’s other interests are?

SMITH: Max has got a few interests. I think he’s definitely a professional student at this point, trying to find what he wants to do, but he has so much enjoyment being in Daniel’s life, taking care of Daniel, I think he’s put his own personal life to the side for the time being, so he can really be there for him. I think we’ll find out a lot of Max’s interests, his deep, deep, deep interests.

AX: Can you relate to Max’s searching for what he wants to do, or have you always wanted to be an actor?

SMITH: I’ve always wanted to be an actor. I’m coming up on almost twenty years of being in the industry, thank you very much, and I knew as a child what I wanted to do. I would say it’s a blessing knowing what you want to do at a young age, but that doesn’t mean you can get away from the journey and the ups and downs. That’s what life is, and this character – all our characters – we have stories, we have journeys, we have trials, we have ups and downs, and I think that’s what the audience will always be able to relate to, is these are human beings, and the purpose in life, we’re always discovering that on a day to day basis.

AX: How much is Max involved in the procedural element of the show?

SMITH: In relation to the crimes? Max will be brought in on the procedures. He definitely has his two cents and opinion on some of the cases, especially how the cases are affecting Daniel. If he feels like a case is just overwhelming [Daniel], Max might be the one who says, “Okay, maybe you need to kind of stand back a little bit, take a little break.” But he does have a certain level of involvement, and I’m sure it will progress.

AX: A lot of your scenes are with Eric McCormack. Were you very aware of him as an actor before this?

SMITH: Well, as far as the show WILL & GRACE [which McCormack starred in], I was a big fan. When you meet him, you become such a fan of him, because of his heart, he’s such an awesome person. But I also learn a lot from him creatively. Watching him as an actor, I learn a lot just watching his performance, watching him in action. Amazing.

AX: Have you been involved in any other projects coming up that we should know about?

SMITH: Well, I did an episode of [Fox’s early 2012 series] THE FINDER – I actually worked with Fifty Cent, we did a guest spot, him and I together, on this particular episode, working with Michael [Clarke Duncan], and that was awesome.