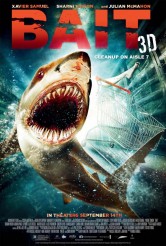 BAIT 3D is swimming into theatres for a brief big-screen appearance before its home video release on Sept. 18. If you’re an aficionado of the killer shark genre, it might be worth checking this one out at the multiplex, if only to cheer on an utterly insane idea that is made to work pretty well.

The premise of BAIT 3D is that an unexpected tidal wave smashes into a town in coastal Australia, trapping patrons inside a supermarket, along with a twelve-foot Great White shark swept in on the deluge. One can imagine a discussion that went, “What can we do with shark horror that hasn’t been done?” “We can put the shark in a supermarket.” “Don’t be silly, how could it get in there?” “I’ll tell you how!” It’s so absurd and yet played so straight that it has a surprising level of charm.

There is the near-obligatory prologue that introduces us to Australian sweethearts Josh (Xavier Samuel) and Tina (Sharni Vinson), whose marriage plans are upset when a Great White shark kills Josh’s fellow lifeguard, who happens to be Tina’s brother.

A year later, Josh has given up being a lifeguard for being a supermarket clerk and Tina is gone from his life, though not his heart. However, of all the markets in all the world, Tina winds up walking into the one where Josh works. This would also be the day a couple of criminals (Julian McMahon, Dan Wyllie) try robbing the place at gunpoint, while a cop is on the premises to bail out his shoplifter daughter. Then the tidal waves hit, and when the survivors get right-side up amidst the half-submerged shelving, they find they’ve got company.

There are numerous absurdities that we are required to accept, chief among them that even a big Great White shark keeps munching away like a human with a compulsive eating disorder. One story element that may be intended as a surprise is revealed so matter-of-factly that we can’t tell if we were supposed to just assume it was the case all along, while another depends on the either that neither we nor the characters can recognize something fairly distinctive (and no, the second one doesn’t have to do with the shark).

Even so, the movie swims right along at a reasonable pace. Unlike a lot of other shark movies that have dubious-looking CGI, BAIT has several practical model sharks that fit in scale-wise with their surroundings; the art of making shark models has clearly come a long way since Bruce from JAWS.

There are also some moments of fun invention, like an impromptu shark repellent suit and an ongoing drama in the market’s parking garage. The movie also makes a point of saving the nastiest death for its most deserving recipient, something not all genre flicks think to do.

The 3D doesn’t do much except get some blood splatter out beyond the edge of the screen. In other words, anyone who waits for home video and doesn’t have a 3D-equipped monitor won’t be missing much.

With one notable exception, the actors are good and all are game for what looks to have been pretty grueling working conditions. Director Kimble Randall handles the script credited to Russell Mulcahy and John Kim with enthusiasm, though the shots of the town decimated by natural disaster may be too close to reality for entertainment value. Otherwise, if you can’t get enough of the frisson of fear caused by a big fin breaking the surface of the water, BAIT is tempting and, while it won’t knock JAWS out of the pantheon, it fulfills its mission statement more effectively than we might expect.