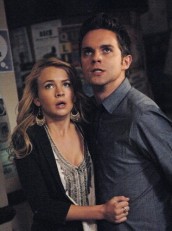 A fisherman with answers to the past wants the circle dead 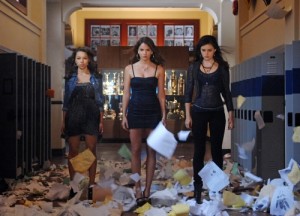 What do you do when you’ve been found out, which is bound to happen in a tiny town? On THE SECRET CIRCLE after last week’s decidedly magical grandstanding from Faye (Phoebe Tonkin) involving her irritation at their school’s leading goodie two-shoes, it’s not a huge shocker that more people are becoming aware that strange stuff is going down!

“Loner” deals with the major problem of our resident witches having no powers unless they are near each other, now that they bound their circle. Faye is pissed, and that is putting it mildly. Honestly, though I think Faye is a lot better person than she has been made out to be. She seems to genuinely care about Melissa’s (Jessica Parker Kennedy) relationship with Nick (Louis Hunter) and even makes a point to tell him to make it something better or get lost. I have a feeling that Faye will actually turn out to be one of the nicer witches and Diana (Shelley Henning) is going to go dark witch once Cassie (Britt Robertson) and Adam (Thomas Dekker) actually hook up.

Cassie also tries dating this episode, unsuccessfully, and she really only has eyes for Adam.  That’s just a completely awkward situation. Cassie just wants friends and to be accepted like any normal teenager, but she is so strongly attracted to Adam that her feelings for him and his for her are going to rip the group apart. She seems to have found a friend in Diana, but I really figure Diana is keeping her friends close and her enemies closer. She wants to keep an eye on Cassie and make sure that she isn’t scamming on her man!

The group has to defend themselves from their first real threat this episode in the form of a local fisherman who went to school with their parents and knows all about the witchcraft and the circle. Zachary (Dave Baez) confronts the kids more than once and in the end gets his ass handed to him by the full group using their powers together. Plus it’s a nice bonus that Principle Chamberlain (Natasha Henstridge) has a vested interest in keeping everything covered up, otherwise it would have hit the fan big time.

Zachary the crazy fisherman was accusing the kids of being just like their parents, in particular Cassie’s mom who was evidently responsible for the demise of his high school sweetheart Heather. I assume that Heather might have been a sacrifice for the past circle, or she just might have been in the wrong place at the wrong time.

This show continues to be enjoyable. The teen angst is a bare minimum, and there’s lots of twisty turny plot intrigue to figure out. My only request is for more magic! I want lots and lots of crazy witchcraft and maybe even some all out magical battles. Yeah. That would be nifty.