Home » TV Review: THE VAMPIRE DIARIES – Season 3 – “The End of the Affair” 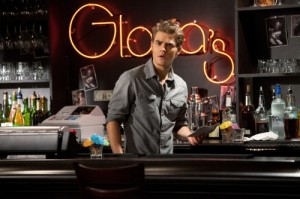 Once again, THE VAMPIRE DIARIES delivers with another fine episode. “The End of the Affair” is packed with lavish 1920’s flashbacks, and all kinds of cerebral goodies to chew on in the present.

Klaus (Joseph Morgan) and Stefan (Paul Wesley) hit Chicago in an effort to find out why Klaus can’t properly create his hybrid army. Of course Stefan knows the real reason, simply that Elena (Nina Dobrev) didn’t really die in the ritual at the end of last season. Klaus however still seems to be in the dark on that score, and he seeks out the advice of a very old and powerful witch (who by the way is an awesome new character that I hope sticks around!). This leads the pair to one of Klaus’ siblings, Rebecca (Claire Holt) who is resting in a coffin with a very special dagger through her heart.

It seems that Stefan during his ‘Ripper’ days was in love with Rebecca and he and Klaus were the best of pals. All of this however was wiped from his memory when Klaus used his ability to compel other vampires. In the end Klaus compels him to remember and I can only guess it’s going to get REALLY interesting from here.

This is actually the main point of this episode that I want to discuss here, with you now. Klaus compels Stefan in the past, right? He forgets whole chunks of his life because of this. Shortly thereafter, with help, Stefan becomes the reformed vampire who no longer takes human life and eventually becomes the man that Elena loves. With me so far? Good. So that Stefan that has existed since the 20’s is a direct product of a compulsion that is now lifted. Anyone else see what I’m seeing?! Stefan wasn’t real this whole time. The person he had become was a direct result of someone tampering with his memories and by proxy with his personality. Now that the spell is broken, Stefan can NEVER be the man he was again. I personally think this is a great piece of writing and explains how a vampire can go from bloodlust and no stop killing to meek and mild and tortured.

So Elena and Damon (Ian Somerhalder) post confrontation with Stefan are pushed together even more. The loss that they both feel, and the desire they have for each other is heading in an interesting direction. Besides, like I said I want these two to hook up!

Caroline (Candice Accola) gets the hell tortured out of her by her father (Jack Coleman) only to be rescued by Tyler (Michael Trevino) and her mom Sherriff Forbes (Marguerite MacIntyre). I feel really bad for Caroline. Remember when she was happy just being Miss Mystic Falls? But, on the other hand she and Tyler both have grown leaps and bounds as characters due to all of the pain and suffering that they have both been through. Of most of the characters on the show, those two have changed more than the rest since the first season.

Lots of threads left dangling, so be sure to tune in next week for another does of Vamp infused soap opera goodness!