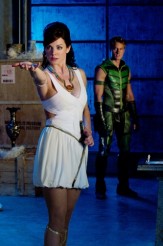 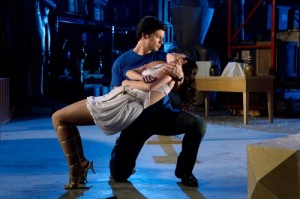 It’s amazing how SMALLVILLE has really dove head-first into the Clark (Tom Welling) and Lois (Erica Durance) romance this year – particularly with the knowledge that Lois knows Clark is the Blur and Clark wanting to tell Lois he is the Blur.

It’s been a phenomenal song and dance and the chemistry between Welling and Durance is even more romantic and heartfelt than that of Christopher Reeve and Margot Kidder from the SUPERMAN movies (sans the flying through the sky moment in the first film).

With “Isis” we get some major revelations and some more great Lois and Clark moments.

The episode has Lois being possessed by the goddess Isis (and looking hot in that skimpy white outfit) who instantly gives Lois super powers as she tries to bring her long lost love Osiris back from the dead. He’s now Lord of the Underworld, so in doing so, it could bring hell on earth.

It provides some fun comic fodder as Clark and Oliver work together to find a way to stop Isis from taking over Lois’ body forever (and raising the underworld). They also bring in Tess (Cassidy Freeman) to help fill the void left by Chloe (Allison Mack). They still don’t trust Tess 100 percent, but by episode’s end they invite her to be part of Watchtower.

It’s an awesome moment, as it shows how much Tess has grown and how she so desperately desires to be a good guy.

Meanwhile, Tess finds her maternal instinct when it comes to wanting to love and raise the young, rapidly growing Lex clone.

The big part of this episode though is watching the cute back and forth Lois and Clark go through in wanting to reveal each others secrets – and the reveal at the end is as romantic as network TV gets. It’s another perfect moment between the two characters in a season already filled with perfect moments between those two.

And Durance is such a perfect Lois – she has really been given so much more range to showcase her mad skills this season. She does an excellent job acting like the Goddess Isis – even with her deeper voice inflections. It never feels false – it’s dead on perfect. And with the quirky Lois moments, she really has grown into this role and made it her own. She’s perfection and adorable  — plus Welling and Durance have chemistry which is a major plus as well.

“Isis” is a solid episode filled with wonderful comedic moments and the further evolution of the Lois and Clark romance. I’m liking how this is all coming together, and the writers have really given fans a great anchor arc for Season 10.