Celibacy ... Dig it! The show returns with one of the best of the season 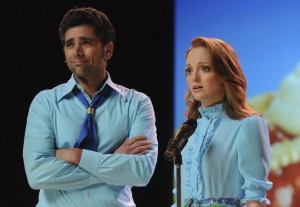 After a week off, GLEE returns with one of the best and most enjoyable episodes yet this season. I feel so much better now that I get to review an episode I thoroughly enjoyed on multiple levels, and “Sexy” was one of my favorites for the year.

Let’s just start with the return of the amazing Gwyneth Paltrow as Holly Holiday! I loved this character last time around, and I knew she was coming back, I just didn’t realize it was this episode. Holly is one of those characters that always gets great lines and great songs, and Paltrow makes everything seem so effortless and light that you can’t help but be captivated by her.

One of the best lines was her “damaged goods which means she’s great in bed but breaks nice guys” was GENIUS.

The theme of this whole episode was sex, and sexuality. There were lots of flips and twists that I’d been wondering when they were going to get to it, and a lot of them paid off. Of course, not all of the payoffs were happy.

Santana (Naya Rivera) has always been a favorite, even when she was basically just a slutty bitchy character. Her look is always flawless, and as I’ve said before she throws shade like a drag queen (which is awesome). Her romance with Brittany (Heather Morris) took a back seat for the better part of this season, but when it was finally time to lay down all of the cards, Santana doesn’t really bat for team penis, and has been using her “over-sexing” as a defense mechanism against her true feelings of love for a girl. It was a great scene with the two of them by Brittany’s locker, and a very heartfelt tearful genuine speech. Maybe Brit Brit will come around before it’s all said and done, or maybe Santana will find a nice girl later on.

Speaking of sexuality, Blaine (Darren Criss) and Kurt (Chris Colfer) had a series of nice scenes dealing with Kurt’s lack of knowledge about his own sexual, shall we say, options? The fact that Kurt is a prude and wants no part of a sexual education was interesting. I think it’s a common stereotype that all gay men want is sex, so it was refreshing to see it taken from a more serious side. The exchange between Blaine and Kurt’s Dad (Michael O’Malley) was fantastic and makes you love Blaine all the more. Then the following talk, with pamphlets between Kurt and his Dad was just another gem of a scene between the two actors.

Having Mr. Schuester (Matthew Morrison) pursue more of an interest in Holly Holiday is perfect. I’ve been getting tired of them using his feelings for Emma (Jayma Mays) as a fallback for his behaviors. I like to see Shu move forward and upward. Holly is more fun, and sensual and she seems a better match. Plus, let’s be honest, Emma is married and her and Will making eyes at each other is kinda tacky at this point.

The music in the episode was SOLID with Gwyneth taking on three totally different songs. The Joan Jett rock song “Do You Wanna Touch Me?” with her dressed like Emma Peel from THE AVENGERS was fun, her duet of Prince’s “Kiss” with Morrison as a tango was fantastic, and last but not least her trio (with Santana and Brittany) of the Stevie Nicks/Fleetwood Mac song “Landslide” was practically perfect.

The Warblers got in a Top 40 of “Animal”, which was fun, but not quite the “sexy” song that I thought they would perform, but hey there was a Lawrence Welk bubble machine to add some fun and flair to the number.

One of the biggest showstoppers, and quite frankly most disturbing things in the episode was the cover of “Afternoon Delight” by the celibacy club. Emma totally didn’t get that the song was about having sex in the midday, and the outfits were early 70’s AWESOME!

Keep up the good work writers! This was a really fun episode that managed to move several plots forward without miring us down in drama and details.