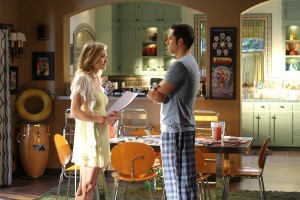 When CHUCK knows it’s going to be entering another rocky road to renewal (which is every year), it always manages to reinvent itself in the final moments of every season to give NBC enough confidence to give it a reprieve (even if it is with some fan nudging).

With “Vs. The Cliffhanger” the show’s co-creator Chris Fedak with fellow executive producer Nicholas Wootton, have scripted an amazingly action-packed finale that sets into motion everything we need to know about what Season 5 is going to be. And of course, Season 5 wasn’t a done deal when this episode was written and filmed, so the pay-off will be even more sweet.

Thankfully, NBC has committed to a fifth a final season of 13 episodes with the show moving to Friday nights on the fall. Yet, we all know how CHUCK continues to skirt death. Thirteen, could turn to 22 or 24 if it does well on Friday nights.

Cheating death is a theme, ironically enough with “Vs. The Cliffhanger” as Sarah’s (Yvonne Strahovski) life hangs in the balance after Vivian Volkoff (Lauren Cohan) used the Norseman device on her during the last episode. The device was supposed to kill her instantly, but she miraculously survived – but barely.

The episode has Chuck (Zachary Levi) traveling the globe to find an antidote for her and to save her life so they can finally get married.

However, there’s a new Big Bad in town – a vicious CIA agent douche bag named Clyde Decker (Richard Burgi) who apparently has been behind everything that’s happened to Chuck and his family since the beginning. He was involved in the original Intersect program that sent Hartley Winterbottom (Timothy Hutton) into deep undercover as Alexei Volkoff (Timothy Dalton). A couple of month mission turned into nearly thirty years of dirty dealings for Volkoff and Decker wants to cover it up.

Before Chuck can get information from Volkoff about the antidote, Decker has erased the Intersect from Volkoff’s mind. Now, he’s a mild-mannered scientist again – horrified at the man he became and the fact that his daughter has followed in the footsteps of his vicious alter ego.

Along the way, Decker manages to take away the Intersect from Chuck too, but, miraculously, Chuck gets the antidote. To do this, he reunites Hartley with his daughter Vivian – and gets her to realize she’s not cold-blooded and evil, but a good person. This last part is a bit of a stretch, considering the whole Vivian arc has been a stretch all season too, but I’m not going to question it anymore than I have to.

All that matters, is Chuck’s plan works and saves the day, Sarah lives and they get married (with a very funny fake-out sight gag worthy of THE SIMPSONS). Hartley’s gift to the newlyweds is giving them nearly one billion dollars from Volkoff industries to do with as they wish. The first order of business is to buy the Buy More and the secret hideout underneath.

However, since the team essentially destroyed CIA protocol and crossed Decker, everyone is fired. They no longer have any jobs. Plus, Decker reveals his insidious plan and cover-up – explaining that Chuck and his family have been pawns in a much bigger game. Big Bad here he is.

With all this money, everyone agrees to team up as free agents to save the world. They have a home base, a secret lair, and a secret weapon. As the episode ends, Morgan (Joshua Gomez) puts on a special pair of glasses left by General Beckman (Bonita Friedericy) which has the Intersect on it.

While the action and wrap-up of this year’s story arc was superb, and the ending twist exceptional, it’s the Sarah and Chuck love story and wedding vows that gets a proper pay-off.

Again, if this was the end of the series, it would have been a fitting end. We see Chuck grow up and become a great spy – without the Intersect. We see him and Sarah grow into an awesome couple. And we realize that CHUCK is a show about continual growth instead about keeping everything the same every season.

There’s a great montage of Sarah and Chuck moments throughout the four seasons, and there’s even a flashback to a few days before she was poisoned where Chuck and Sarah have a pretend wedding to get over the jitters. It’s an incredibly heart-warming moment. Sweet, endearing, and real softness we haven’t seen between Chuck and Sarah in some time (especially with all their hang-ups they had to deal with all season long on the road to marriage).

I also like the idea that the CIA will become the Big Bad in the forthcoming season. It adds all sorts of new layers to the show. And if indeed the 13 episodes are the final 13 episodes, it allows the producers and writers to prepare a pretty kick-ass conclusion to one of the coolest geeky shows ever to grace the NBC network.

Thank you NBC for giving us another year and thank you writers of CHUCK in finding a way to end Season 4 with a bang – and enough gusto to carry us into a Season 5 series conclusion.

AGREE? DISAGREE? Let us know your thoughts on the season finale by clicking on our COMMENTS section below