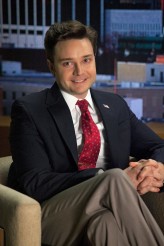 Michael McMillian’s life is full of TRUE BLOOD. The Kansas-born actor has played the originally anti-vampire Reverend Steve Newlin in every season of the HBO hit series, which has its fifth-season finale this Sunday at 9 PM (never fear, it’s coming back for Season Six next year). Steve has gone through quite a transformation, showing up on the doorstep of human Jason Stackhouse (Ryan Kwanten) at the end of Season Four sprouting fangs and this season becoming both the spokesman for the Vampire Authority and the good pal of holy terror ancient vampire Russell Edgington (Denis O’Hare).

In his off-screen hours, McMillian is one of the writers on the TRUE BLOOD comic book series. In this exclusive two-part interview, conducted by telephone, McMillian talks about the various aspects of his involvement with the vampires of Bon Temps.

AX: Which came first, the comic book writing or the acting?

MICHAEL McMILLIAN: The acting. Unless you count the comic book writing I was doing in the third grade at home. I’ve been out inL.A. working as an actor for about ten years now, and started [acting] before that when I was in college. But writing is something that I’ve always loved to do, and I started publishing comics about two years ago.

AX: When you went in to audition for Steve, did they tell you what they were looking for?

McMILLIAN: The audition process was pretty quick and easy. In a version of the scene that I had that would eventually show up in Season Two, when Sookie comes to visit the Fellowship and find out about Godric, it was just a really well-written scene and I just went with what was on the page with my gut. I got one note from [TRUE BLOOD series creator] Alan [Ball], and that was to play the scene again, but smile the entire time. And I did that and he was like, “Great, thank you.” A few hours later I got the call that I booked the part, so I guess it worked [laughs]. It’s still a major part of the character.

AX: When Steve was first introduced in Season One, he originally was only seen on TV, right?

McMILLIAN: Yeah. Actually, I think my first appearance was on a sort of Bible chat show with a Tammy Faye Bakker lookalike, talking about my father being killed by vampires. I think the next time we saw him, he was giving a speech, kind of rallying humanity against vampires, and then finally we saw him at the end of Season One, preaching in his church and catching the eye of Jason Stackhouse. And I’m not sure – I guess in the beginning of Season Two was one of the first times that Nan Flanagan [the previous Authority spokesperson, played by Jessica Tuck] and Steve Newlin faced off [on a television news show]. Season Two really marked Steve Newlin’s arrival as we know the character now.

AX: When you were cast in the first season, did they say to you, “Now, in second season, you’re going to be one of the main villains”?

McMILLIAN: Yeah. I had known that the role was going to be pretty small in the first season and the plan was to make him a much larger role in the second season, which is one of the reasons I wanted to try out for it, but also, I just loved the idea of playing this right-wing Christian evangelist who hated vampires. It was such an out-there idea and such a great character, but also something that I thought was really relatable and really relevant to today. It was a really fun, satirical role.

AX: Did you base your performance as Steve on any real public figures?

McMILLIAN: I mean, I tried to stay true to the character that Charlaine [Harris, writer of the novels that TRUE BLOOD is based on] had created in the book and the character that Alan was creating on the page for the show, but there were definitely inspirations – everybody from Ted Haggard to George W. Bush, the culture I grew up not too far from in Kansas. So it was really an amalgamation of a lot of things, but I definitely was paying attention to Pat Robertson, 700 Club and people and shows like that when I was developing Steve.

AX: There was that big melee scene in the church …

McMILLIAN: That was a great shoot. We were out there for a week and that was the first time I got to work with Alex Skarsgard [as Eric], and we really hit it off, and I got to work with Stephen [Moyer as Bill] – I’d worked with Anna [Paquin as Sookie] before then, but it was cool. It was one of those set-pieces that really brings together a number of storylines, and I love it when that point happens in a season of the show.

AX: When you have a scene that’s got that many moving parts in it, do you have to be particularly conscious of what you’re doing, or do you just play a scene the way you’d normally play a scene?

McMILLIAN: It doesn’t really affect me in terms of, I don’t have to think about how they’re piecing together a large scene like that. One of the technical sides of acting for the camera is always trying to keep movement and props and those sort of things as consistent as possible for continuity’s sake, but within that, feeling free to try new takes and try different approaches each time, and that’s something I always try to do. It’s really just a matter of stamina, because on the larger set-pieces, you’re typically shooting a scene over the course of three or four days, as opposed to three or four hours, so you just have to keep your energy up for that period of time.

AX: After the big Season Two storyline, you were in Season Three briefly, and in Season Four, you show up on Jason’s doorstep.

McMILLIAN: Right. I got in right at the last second.

AX: After Season Two, did you know Steve would be coming back again in a prominent way, or was that a big surprise?

McMILLIAN: No, I didn’t know for sure. All I knew was that I hadn’t been killed and that’s usually a good sign on TRUE BLOOD. If your character hasn’t met the true death, there’s a good chance you could make it back.

AX: In some cases, even if you have died – Godric, Lorena, Jesus …

McMILLIAN: Yeah, there are always flashbacks and ghosts and hallucinations. So you don’t really know when a character is gone for good [laughs]. But I think that the writers were fans of the character and I was holding out hope that he’d be back at some point, but I didn’t know it was going to be as a vampire, and I was just super-excited. That was something that I had kind of hoped they would do with the character back when we were shooting Season Two. It just seemed the logical place for that character to go.

AX: Have you and the writers discussed what being vamped has done for Steve’s view of theology?

McMILLIAN: Not so much. We really haven’t had a lot of those specific conversations. That’s something that I’ve kind of navigated through myself. And the best I can say is that, in that first episode of Season Five, Steve says, “I’ve been blessed with the gift of immortality.” I think that’s really the way he sees it. I think that he thinks whatever happens to him is divine. It doesn’t necessarily erase his theology, it just sort of redefines it.

AX: Did you know in Season Two that Steve Newlin was gay and closeted at the time?

McMILLIAN: I think that actually came out of the way I was intentionally playing the character in Season Two. Nobody said, “This character is in the closet, so try that.” It had just become really clear, the dynamic that was being created between Ryan Kwanten [as Jason] and Anna Camp [as Steve’s wife Sarah], there was a really fun love triangle taking place. And I think that Steve was fascinated with Jason Stackhouse, and that was in the script. [Steve] hand-chose [Jason] to be this prime Soldier of the Sun. But I think Steve, whether he knew it or not, was falling in love with that guy. And I was definitely playing that in my mind, and keeping it a bit of a secret. And I think it showed a little bit in the performance, but it was never on the page. But when he came back, I think the writers who knew that I had that take on him and just ran with it.

AX: How did you like doing those scenes with Deborah Ann Woll as Jessica, where Steve gets into a physical fight with her over Jason?

McMILLIAN: Oh, it was great, it was a dream come true. I love Deborah, we became friends back in Season One. There’s such a long list of actors I’d love to work with on the show, and she was at the top of it, just because we get along so well, and I think there’s a similarity there between Jessica and Steve. They both come from these religious backgrounds, possibly both turned against their will. Jessica’s much further down the line than Steve is, but she grew to embrace her vampiric side, and I think that Steve does, too, but he’s rushing into things and he’s just a sort of big, horny, virginal teenager. He’s just a giant hormone at the moment.

AX: Did you know when you were told that Steve was coming back as a vampire that he was also going to become the spokesman for the Authority?

McMILLIAN: Oh, that was news after. I didn’t find out about that until I read the third episode script. We’ll hear a little bit of this or that and a few hints maybe ahead of time. There are some things that I like to know going into it, like I asked who my Maker was before we started shooting this season, just because that’s something that Steve would already know. But a lot of what happens to the characters down the line, the actors just kind of find out when we get the scripts, so it’s always a bit of a nerve-wracking experience [laughs], because the fate of your character is always hanging in the balance.

It’s funny, because Steve tells Jason that his turning was a punishment. And Salome [Valentina Cervi] says that Steve was brought in to be a tool for the Authority, and I think that that’s probably true. I think it was a little mix of both, to be honest. I think that they went, “Let’s get this guy, and then let’s turn him, let’s flip him.” He’s a master of spin, and that’s why he’s good at his job and that’s why they would put him in front of the cameras. When you put him in front of the camera, you give him all the attention, he’s really good at what he does.

AX: Now that Steve is vamped, have you had to practice talking with the fangs in your mouth?

McMILLIAN: Yeah, I actually went in a little bit early before we started shooting this season, and went to set and borrowed the fangs and went into a room and read all of my stuff from the first script, just because it’s a little tricky, because the lisp factor increases by ten. But you have to figure that these vampires – if we really spoke with fangs, our speech would be affected a little bit, so you have to assume that happens [laughs].