LEVERAGE: REDEMPTION: Stars Gina Bellman and Aleyse Shannon on the second half of Season 1 – Exclusive Interview

The actors talk about the IMDB TV reboot 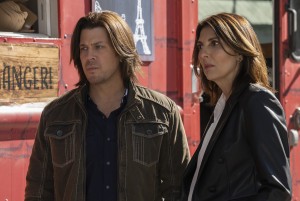 LEVERAGE: REDEMPTION now has the entirety of its sixteen-episode first season available for viewing for free on IMDB TV, as well as for Amazon Prime members.

LEVERAGE: REDEMPTION, set and shot in New Orleans, is a sequel series to the 2008-2012 LEVERAGE. Both series are created by Chris Downey and John Rogers, and executive-produced by Dean Devlin.

In the original LEVERAGE, Nate Ford (Timothy Hutton) brought together a team of con artists and criminals to hoodwink wealthy evildoers and help out their victims. That series ended with Nate and his master of fake identities love Sophie Devereaux, played by Gina Bellman, marrying and retiring from the game.

The second half of LEVERAGE: REDEMPTION Season 1 finds Sophie increasingly warming to being back among her friends and participating in their cons. The team is joined by young hacker Breanna Casey, played by Aleyse Shannon, who is also feeling more at home not only doing tech work, but in playing the diverse roles various cons require.

LEVERAGE: REDEMPTION premieres Friday, July 9, on the free IMDB TV streaming service (part of Amazon Prime). The series is both set and shot in New Orleans.

Besides her previous five years as Sophie, New Zealand native Bellman is known for feature and television work including KING DAVID, BLACKEYES, COUPLING, the JEKYLL miniseries, EMERALD CITY, and BULLETPROOF. 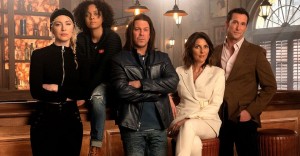 Both actors get on an exclusive Zoom call to talk about the last eight episodes of LEVERAGE: REDEMPTION Season 1.

ASSIGNMENT X: Breanna almost immediately gets to go undercover and play a lot of characters. Which one was the most fun for you, and did you have to learn anything in order to do them?

ALEYSE SHANNON: It’s not fair, but I definitely have two. I think one is [avant-garde artist] Six Days. Six Days had no lines [laughs], but I didn’t have to learn much for Six Days, I just sort of tapped into that physical comedy, which I’ve studied and stuff like that. But I think my favorite character has to be a character that I named Freida, from the Halloween episode. I just popped on a Shake and Go wig, and was palling around with Beth in a scene that’s not very big, but it was just fun. And the freedom to play those characters is what makes this job really, really exciting.

AX: Sophie of course specializes in inventing characters for cons. Did you have a favorite character that Sophie got to play this season?

GINA BELLMAN: It’s so hard to pick favorites. It’s like having a favorite child. And so, I always say the first thing that pops into my head, and then halfway through, I’m look, “Oh, but what about this?” I always really enjoy doing the flashback episodes. We’ve done a lot of them in previous seasons, and so doing “The Jackal Job” episode [with Joanna Cassidy as legendary thief who was active in the ‘70s], where I got to play Joanna Cassidy in her flashback memory, and wearing all the ‘70s clothes, that was a lot of fun for me. 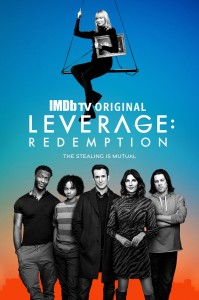 I loved working on the episode [“The Great Train Job”] directed by Beth [Riesgraf]. There was an actor called Jon Fletcher, he’s a British actor, and we got to work [together]. I got to play Lily von Bismarck and work on the German [accent], and that was a lot of fun, and we got to rehearse our scenes almost like theater, because they were quite long scenes, and quite complicated. I remember one particular scene we left right until the very end of the day, and they were unsure of whether they would have time to shoot it, so Jon and I just rehearsed it like a play. We were like, “Watch this, and see if you can shoot it quickly,” and they did. Those sorts of things. Being on a job where you can be spontaneous and you can have input is so freeing, and liberating, and it just makes every day at work exciting.

AX: Beth Riesgraf got to make her television directing debut with two episodes of LEVERAGE: REDEMPTION, and Noah Wyle, who has directed on Dean Devlin series before, directed three. Did you not want to direct, or was there not time?

BELLMAN: Beth has been in training, it’s been a long dream of hers to direct, and she’s an amazing photographer. As long as I’ve known her, she’s been a photographer, and I was around when she shot her first short film many years ago, and she’s been shadowing directors, she’s been learning her craft. You don’t just get a phone call overnight saying, “Do you want to direct an episode?” I think it’s well-known on set that I’m not the most technical of the group, and so if I were to direct, I’d probably lean more towards directing theater. I don’t think television is my genre.

But Beth was absolutely amazing. She was so impressive as a director, not only in how she directed us as actors – obviously, she knows us all really well – but the way she crafted her scenes and her cinematography. She had really ambitious shot lists. Both her episodes were very cinematic and it was icing on the cake, really, because we knew it was a dream of hers, and she’s been working really hard at it, and it was great to be able to be a part of that. 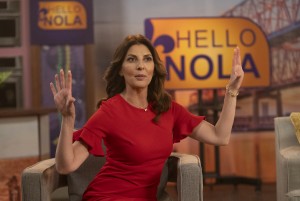 AX: For both of you, LEVERAGE has always in broad strokes been about things going on in the real world, but LEVERAGE: REDEMPTION seems to be honing in a little more on immediate, real-life problems. Do you have a favorite one of those you’ve gotten to tackle, either in what the topic was, or in how you got to tackle it?

BELLMAN: I really found “The Unwellness Job,” an episode that Noah Wyle. I’m interested in the wellness industry, where people are exploited, and where people are vulnerable to buying snake oil, and people are getting taken advantage of, and so easily influenced in ways that are not particularly healthy. And so, I did enjoy the concept of that one a lot, actually, this season.

SHANNON: Yeah. The one that interested me the most had to have been “The Tower Job,” because when I moved to New Orleans, there was a structure that was being taken down, and just the idea of something of that magnitude, a building coming down because of somebody’s neglect or stuff like that – there are several examples of it. I just thought it was very apropos to what’s going on, big business versus people, and the blue-collar workers. I thought that was very interesting, and also very moving. 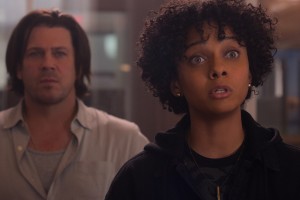 SHANNON: There are some cities, they’re cities of the people, and I think that was missing from New Orleans a bit [because of COVID], the people on the street making the city what it was. But the place is dripping in culture, so I think we all picked up a bit of it. I know I definitely was a little bit familiar with it, but I still felt it. I heard all the [grandmotherly voice] “Babies,” so it was brilliant, and it was nice and calm, and it was good to walk on Canal Street or Bourbon Street with not a thousand people behind you. But it’s still kind of weird, still COVID’s doing its thing, so …

BELLMAN: We got to eat some good food, I got to see one concert before I left, which was amazing. Because we were there for nine months, and [none of the music venues] were open. And it did feel like the city was grieving. Every now and then, you’d hear a saxophone wafting off a balcony, and you’d just be reminded that you weren’t really living the New Orleans experience. But we had our moments. We had six hurricanes, so that counts as something [laughs]. We would be shooting, and suddenly, the producer would walk on set, and say, “Right. Tools down, everybody. You’ve got twenty minutes to get home before the tornado comes in.” So, we did experience the city, but she wasn’t fully dressed. 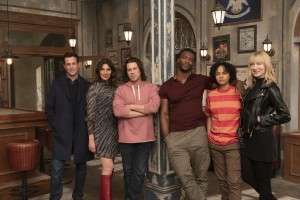 AX: And what would you both most like people to know about the second half of LEVERAGE: REDEMPTION Season 1?

BELLMAN: I think that going into this next eight episodes, they really are in their groove, they’re finding their feet, their cons seem to get bigger and more elaborate, more cinematic. Sophie certainly is getting more confident in the leadership role. And the finale has that wonderful resolution, and we really get a sense of where each character is, and what their trajectory is going to be moving forward. I think it wraps up really well.