The actress talks her role on the action-adventure series 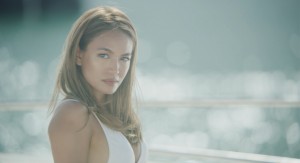 In ALMOST PARADISE, in its first season Monday nights on WGN America and thereafter available on Amazon Prime, Samantha Richelle plays police detective Kai Mendoza. The series, created by Dean Devlin & Gary Rosen, is set and shot in the Philippines. Kai is the youngest detective on the force on the scenic island of Cebu. She is often paired with more senior detective Ernesto Alamares (Arthur Acuna). Both of the law officers find themselves alternately helped and annoyed by Christian Kane’s character Alex Walker, an American ex-DEA agent who thought he was retiring to Cebu, but can’t help himself when it comes to stopping crime.

While Richelle has done stage work in the past, but ALMOST PARADISE is her first major onscreen role. In a phone interview, she discusses her work on the series.

ASSIGNMENT X: If you weren’t acting, what were you doing before you were on ALMOST PARADISE?

SAMANTHA RICHELLE: Before that, I was actually a design student. I worked for other designers, but I ended up launching my own brand in January. So that’s been keeping me pretty busy. Actually, that’s still keeping me busy, up until this day. So it’s a namesake label. It’s a ready-to-wear line, and it’s mainly on an online platform, SamanthaRichelle.com. 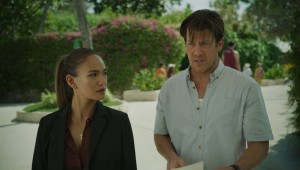 AX: Are you involved in the design of the costumes you wear in ALMOST PARADISE?

RICHELLE: No. But I definitely did have a lot of say in Kai’s get-ups and what she looked like. The basic combat boots, the tight jeans, and then the t-shirt was definitely something I threw in there, and I thought Kai would definitely be wearing something like this. So I put my two cents in.

AX: How did you come to be involved with ALMOST PARADISE?

RICHELLE: That’s actually a pretty funny story. About ten years ago, when I was in design school, I was dabbling in acting, so I had quite a few friends in the industry, and I had one friend who wrote a play, and he wanted me to be a part of it and act in it. So I was like, “Yeah.” He knew I had some interest in acting at the time. I ended up doing this play in Los Angeles, and one of the producers of ALMOST PARADISE, Francis dela Torre [who is also a writer/director on the series], was actually helping my friend with his play at the time. He remembered me, and he contacted me and told me about this project, and it was just like, “There’s this part, I totally see you doing it, I would love for you to come in and audition.” And that’s what I did, and I guess they liked me [laughs].

RICHELLE: I was in the Philippines at the time, and they were all the way in the States, so they wanted me to do a phone audition, so I did it on my phone. They gave me a little script for me to read, and I did that twice, and then they asked me to come in a month later, when Christian Kane and Dean Devlin were coming to the Philippines, to do chemistry reads and audition for the role. So I came in for a chemistry read with Christian. I did actually do a little fight audition as well in between there. I came into one of the studios, and they asked me to learn this fight choreography, and then they just had me come in and film it. And two weeks later they called me, and they were like, “Yeah, you’re coming to Cebu.” 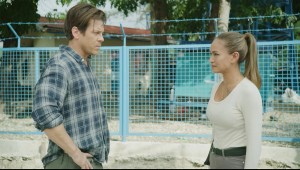 AX: How would you describe Kai Mendoza as a person?

AX: Did you do any research for playing Kai, like into how police do things, or how to handle a gun, or how to tell people they’re under arrest?

RICHELLE: Yeah. Luckily, I got to talk to Dean before the chemistry read. We talked about the character, and the background, and what he thought about it. And I was able to understand what he wanted out of the character. But when it came to the physical stuff, like fighting and knowing how to hold a gun, I definitely did some combat training during the first week. When I got to Cebu, I had a week’s training. I did some choreography, and I did some little drills, and just basics, and also went through fighting with sticks, and fighting with my hands, and different sorts of things that they thought Kai would be doing. So they put me through a lot of training. And we had a lot of different fights in every episode. We’d always go back into the dojo to do more choreography and training. So it was definitely a lot of the job.

AX: Do you have a martial arts background, or a dance background?

RICHELLE: Yes, actually, I was a dancer. I trained [in dance] for quite a bit, and I think that’s definitely what made all the fight choreography quite fun, and quite easy and familiar for me. I did karate when I was ten years old [laughs], but that’s long forgotten. And I have been doing some boxing, just to keep fit. But it’s really just all my dancing training that made the fight choreography quite familiar.

AX: Do you have a style of fighting that you’ve found you particularly like?

RICHELLE: That I like? Well, as I said, I’m not really too familiar with many martial arts. But Kai does have a signature move. I do this elbow snap to the face, because they found that I like to put that into the choreography [laughs]. I’m actually not too familiar with where that comes from, but I thought that was pretty cool. And I got to do some jiu jitsu, which I found really exciting. 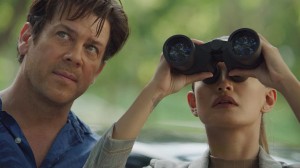 AX: Christian Kane has said he does a lot of the fight choreography for the fights that he’s in. Does he ever choreograph fights for you?

RICHELLE: Yes. I was actually about to mention that. There’s an episode with a fight scene between me and Christian, and he was pretty much all over that. And that’s when I learned some of the jiu jitsu. So yeah, he definitely helped me along the way with my fighting style. And he’s really good at what he does.

AX: Were you familiar with Dean Devlin and/or Christian Kane before you became involved in ALMOST PARADISE?

RICHELLE: Yeah. I’d definitely seen Dean Devlin before. My friend Francis dela Torre, he was the one who was mentioning Dean’s name, so I was familiar with Dean, and definitely familiar with his work. Christian I wasn’t too familiar with, but of course when I found out I was going to come in and read with him, I was able to look up some of his movies, and they were movies I’d seen before.

AX: Were you familiar with Arthur Acuňa before this?

RICHELLE: Yes, actually. I have a friend here [in the Philippines] who had worked with him before, but I’d never actually met him. But I did run into him during the audition, and we did a little audition together, which was pretty fun, so I was definitely rooting for Art.

AX: Had you been to Cebu before working there?

RICHELLE: That was actually my second time going to Cebu. I’d been to Cebu once. It’s got the city, and it’s got the beach as well, so you have both worlds over there, which is quite amazing.

AX: Has your experience working on ALMOST PARADISE made you think that you’d like to act in other projects? 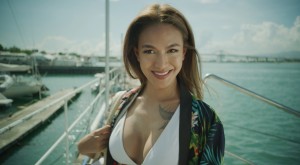 AX: Are you still also doing your clothing design work?

RICHELLE: Yes, I’ve been working on that. Obviously, right now, it’s a little bit more quiet. But we still have stuff online which people can look at, and we’ll take some orders when things blow over.

AX: And what would you most like people to know about ALMOST PARADISE?