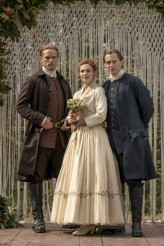 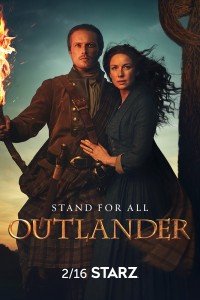 OUTLANDER is now in its fifth season on Starz Sunday nights. Based on the novels by Diana Gabaldon, OUTLANDER tells the story of time-crossed lovers Claire Randall (Caitriona Balfe), a World War II nurse turned postwar surgeon, and eighteenth-century Scotsman Jamie Fraser. In Season 5, Jamie and Claire are settled in the North Carolina colonies as the Revolutionary War looms. Their daughter Brianna (Sophie Skelton), born in the twentieth century, has joined them, as has her twentieth-century-era husband Roger (Richard Rankin), but as always, trouble finds them.

Executive producer Maril Davis tells a Q&A session for OUTLANDER that, from her perspective, there’s no end in sight for the series. “We’ll keep making this until Claire and Jamie are one hundred. No, honestly, we will. I mean, there are still many more books to go. If Starz and Sony are willing, we’re willing. If the actors are willing, we’ll keep going as long as there’s interest. We’ll never catch Diana [who is still writing new OUTLANDER books], I don’t think. Yeah, we’ll keep going.”

ASSIGNMENT X: What was the reason for “Droughtlander,” the fact that you had a longer-than-normal gap on air between Seasons 4 and 5?

MARIL DAVIS: I think that’s pretty much a Starz thing, because our production schedule has pretty much stayed the same. It always takes a long time. Like I said, we’re almost in a cyclical pattern at this point. So I don’t know if that’s more of a Starz question, but production-wise, we’ve pretty much stayed on the same schedule. I don’t think we had a delay that we know of [in terms of how long the season took to produce.

AX: You had the Scotland where Claire originally arrives in Seasons 1 and 2, and then you had the twenty-years-later Scotland, and you’ve had Barbados, and twentieth-century America, and you’ve got pre-Revolutionary War North Carolina. Is there one that’s easier or more difficult than the other, and why?

DAVIS: I will say most of us had a pretty good time in South Africa [where some of the island and ocean-faring sequences were shot]. But I think North Carolina has actually been the most difficult for us lately, because whereas in the past, when we were in Scotland, if God forbid a location fell out at the last minute, it wasn’t easy, but it was easier to find another location in Scotland. Now that we’re in the Colonies and you don’t have all stone buildings, if something happens to the location, if the art department is just inundated with work, and we haven’t been able to finish a set in time, it is very difficult to find something else. So I think that has been the challenge. And also, obviously, we are filming North Carolina in Scotland, and while sometimes the weather is the same, and certainly the foliage and other stuff are similar, there are distinct differences. But I think our art department and, across the board, our entire team has done a pretty amazing job recreating that. We will obviously get those people from North Carolina who are maybe like, “That’s not how it looks where I live,” but really, our art department and everyone else, greens [the department that handles on-camera plants], everyone has done a pretty spectacular job.

DAVIS: Well, is there anything specific you’re thinking of?

AX: Well, Claire’s reaction to the fact that Jamie remarried during the twenty years she was away … 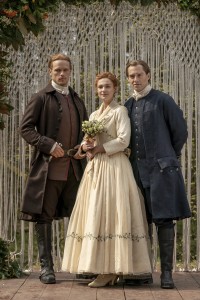 DAVIS: I know. I was kidding. [laughs] Listen. A lot of the stuff we do, we obviously take many of our cues from Diana’s amazing books. So there are a lot of things in the show that are taken from the books. And so we try to follow that as much as possible. But I don’t know if there are a lot more moments of that. I think those moments you were talking about are pretty specific, and are in the past. But still, there are interesting dilemmas every time, and we all don’t know how we would react if we were separated from our loved one for twenty years, and then thrown back together, and what we’d tell them, what we wouldn’t. It’s all very subjective at the end of the day. But I certainly think they pull it off magnificently.

AX: And what would you most like people to know about OUTLANDER Season 5?

DAVIS: Oh, that’s a good question. That’s a stumper. What do I want people to know about it? I think we’re really proud of what the actors have done this season. It’s not an easy season, and I think everyone will really enjoy the hard work they’ve put into it.