The actress talks the ABC comedy 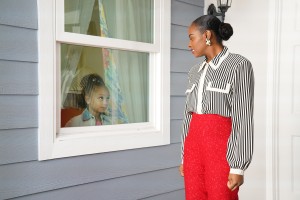 ABC’s Tuesday-night comedy MIXED-ISH is a spinoff of the network’s BLACK-ISH. Co-created by BLACK-ISH star Tracee Ellis Ross, MIXED-ISH is very loosely based on Ross’s childhood; Ellis narrates the new series as her character’s adult self.  MIXED-ISH chronicles the adventures of Ross’s BLACK-ISH character Bow Johnson (played as a youngster by Arika Himmel) as a child in the ‘80s, with a little brother (Ethan William Childress) and sister (Mykal-Michelle Harris), white dad Paul, played by Mark-Paul Gosselaar, and black mom Alicia, played by Tika Sumpter. (Anna Deavere Smith plays Alicia when the character recurs on BLACK-ISH). The family is coping with the shock of moving from a free-spirited commune to the conventions of suburbia.

Sumpter, originally from New York, was a series regular on the soap ONE LIFE TO LIVE. She played the young Michelle Robinson (later Michelle Obama) in the film SOUTHSIDE WITH YOU, and Ice Cube’s sister/Kevin Hart’s love interest in the RIDE ALONG movie franchise. Some of Sumpter’s other credits include arcs on GOSSIP GIRL and THE GAME. Sumpter can currently be seen on the big screen in the just-released SONIC THE HEDGEHOG.

ASSIGNMENT X: We know that MIXED-ISH is very loosely based on Tracee Ellis Ross’s childhood, and you’re playing the mother of the character based on her. Are you in any way trying to emulate her real-life mom, Diana Ross?

AX: How is it playing the mom of three kids? Is that what you expected, or is it any different?

SUMPTER: I have one kid [in real life]. She’s only three years old, so everybody else is a little older on this show, but it’s everything I expected. It’s a lot of energy, nonstop, sometimes paying attention, sometimes not, but amazing, talented little kids who are fantastic, whose parents are fantastic, and I just get to have a really good time with them. And it’s everything that I’ve expected.

AX: Do you have more fun in the scenes with the other adults, or with the kids?

SUMPTER: It’s different. I feel like the kids keep me young. They teach me new dances, they keep me hip. But then working with Mark-Paul is like a dream come true. He’s such a professional, and he’s done so much that we play around, and our chemistry is fantastic, and I love him. 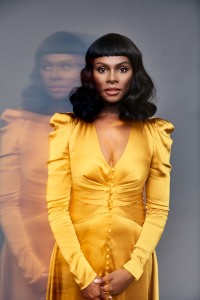 AX: In the show, do you play any flashbacks to when the family is living in the commune?

SUMPTER: Yes. There are flashbacks to the commune. In real life, do I have it? [laughs] We have a lot, actually, a few.

AX: Is that more fun, or is the suburban stuff more fun?

SUMPTER: Oh, my gosh. They’re both different, but the commune is fun because it’s like you get to live in this world of some sort of freedom, or pseudo-freedom, and being who you really are, people seeing you just for the human being you are, and then getting into the other world, where capitalism plays into everything, and that’s also fun, to see who you are in that world. And Alicia’s an attorney, so, yeah …

AX: So you were there but not there …

SUMPTER: I was there, but I was not there [laughs].

AX: Well, if MIXED-ISH lasts long enough, you’ll get into the ‘90s.

SUMPTER: I have SONIC THE HEDGEHOG coming out, with Jim Carrey, James Marsden, so I’m super-excited about that.

AX: Are you a voice, or are you live-action?

AX: Can you say who you play?

SUMPTER: Yes. I play James Marsden’s wife, a veterinarian. I help Sonic out. I’ll say that.

SUMPTER: There we go.

AX: And what would you most like people to know about the rest of the first season of MIXED-ISH?

SUMPTER: Oh, my gosh. So many good episodes are coming up. It’s just a fun, good show that you can watch with your family, learn but not be beaten over the head with lessons, and laugh at yourself and maybe change a little bit of your mind about something.