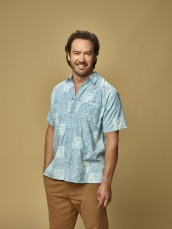 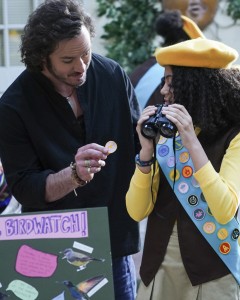 MIXED-ISH, Tuesday nights on ABC, is a prequel spinoff of that network’s BLACK-ISH. Created by Kenya Barris (who also created BLACK-ISH) & Peter Saji & Tracee Ellis Ross, MIXED-ISH explores the childhood of Ross’s BLACK-ISH character Rainbow (played in MIXED-ISH by Arica Himmel – Ross narrates as Rainbow’s adult self), her two siblings and their parents, black mother Alicia (Tika Sumpter) and white father Paul, who is played in MIXED-ISH by Mark-Paul Gosselaar. (We’ve already met Paul’s older self as played in a recurring role by Beau Bridges on BLACK-ISH.)  We encounter the family as they’re forced to move from a free-spirited commune to ‘80s suburbia, where they have to deal with contrary family members like Paul’s dad Harrison (Gary Cole) and Alicia’s Aunt Denise (Christina Anthony).

MIXED-ISH represents a change of pace for Los Angeles native Gosselaar, who in his youth was one of the stars of the teen comedy series SAVED BY THE BELL, but in his adult years has gravitated towards drama. Among his credits as a TV regular, Gosselaar includes NYPD BLUE, RAISING THE BAR, FRANKLIN & BASH, PITCH, and most recently THE PASSAGE, where Gosselaar’s character took it upon himself to protect a little girl from vampires.

ASSIGNMENT X: Is it harder to try to save one little girl from vampires, or three children from suburban racism?

MARK-PAUL GOSSELAAR: Oh, boy. I’d rather save them from vampires. It’s sort of eye-opening to be on a show where we’re dealing with topics that are still relevant today – gender, race, individuality.

AX: Were you looking to do a half-hour comedy, or did MIXED-ISH just come up?

GOSSELAAR: It sort of came up. I signed with a new agency, and was actually talking to my agent here, Sean Grumman, and we were talking in the room, and he said the same thing – “Would you ever do comedy?” And I said, “Of course.” And he had a client who was fired from MIXED-ISH, and there was an opening, and they put me right in. 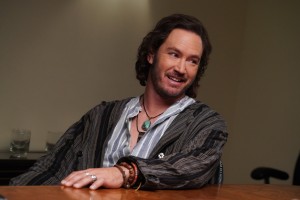 AX: Did the producers tell you, “This is what we were not getting from the other person, so we’d like you to …”?

GOSSELAAR: No, not at all. I never watched the other pilot, I have no idea what the other person did, I have no interest in knowing what that was. I wanted to use it as my own.

AX: Did they tell you anything besides, “You’re Beau Bridges, but younger”?

GOSSELAAR: [laughs] I sort of understood that when I went in for the chemistry read with Tika Sumpter. I had watched a bit of Beau on BLACK-ISH, and said, “I’m going to use that as a template, and go from there.”

AX: And how is your chemistry with Tika Sumpter?

GOSSELAAR: It’s amazing. I had to fight for this role, I had to prove that we have chemistry. We absolutely do. She’s very talented and smart, a great person to work off of and bounce ideas off of.

AX: Is there anything in your real-life experience with family or friends that helped inform what you wanted to do with Paul in MIXED-ISH?

GOSSELAAR: I grew up in a mixed-race family. My experience was wildly different from what I’m portraying on screen, because of the way I look, but I did my homework and watched Beau Bridges with the character, because I’m actually playing him, and just pulled some things from him and decided that I would emulate some of the things that Beau has done on BLACK-ISH.

AX: Are there any things that you have done to put your own spin on the character?

GOSSELAAR:  The writing is so solid. I’m sure over time I’ll kind of give Jack some of my own personal experiences and things, but at this point right now, it’s like, I wanted to finish this pilot, I was taking over for somebody [Anders Holm] who had been cast before me. 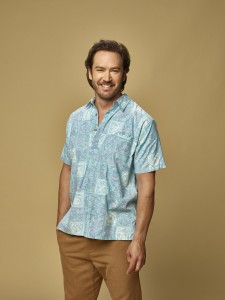 AX: How is playing the father of three young kids?

GOSSELAAR: That’s my life. I’m the father of four kids. But playing the father of three young kids, it’s great. When things go wrong, I just tell them to go to their parents.

AX: How much has real-life parenthood changed you?

GOSSELAAR: I’ve been a parent for fifteen years. I can’t remember what it was like not being a parent. I think parenthood is a humbling experience. I feel every day I’ve failed at my job in terms of parenting [laughs]. I go to bed at night going, “God, I’ve got to do better, I’ve got to do better.” And I’m probably doing a great job, as much as a parent can do, but it is one of those things that you constantly strive to be a better person, a better parent. It gives me a lot of meaning, and gives me something to strive for. And seeing the world through their eyes, honestly, there’s really nothing better.

AX: Have your kids surprised you with how sophisticated they are?

GOSSELAAR: [laughs] They’re “screenagers,” as I like to call them. So it’s a different world. They’re watching television on a five-inch screen, and that’s how they consume their media. I don’t know if it’s sophistication – I really don’t know what it is. At times, I’ll be honest, I feel like an old man saying this, but it scares me at times, because I don’t know where that’s going to lead to.

AX: Are your children aspiring performers?

GOSSELAAR: Yes, but I don’t want them to hear that. They have the talent. My oldest son and my daughter are very good public speakers, very talented on stage – my daughter does a lot of theatre and a lot of dance. They’ve talked about aspirations. I’ve just said, “Hey, look. You have school, there are other things you can do to quell those desires. Go do those, and then we’ll talk afterwards.” I’d like to see them finish school.

AX: Do you think child actors today are different than they/you were when you started out at age ten?

GOSSELAAR: Yes. I think the environment they also have to work in, with social media, and the understanding of knowing what they’re doing – when I was going through it, I didn’t know what I was doing. Honestly, when we were filming SAVED BY THE BELL, it was an after-school activity we did, like Little League. I mean, I went to an audition, I got it, found myself on a show for six months, and then went back to normal school. They’re so much more aware of the business, and what can be produced from being on television, that I had no concept.

AX: What did you learn while working on SAVED BY THE BELL?

GOSSELAAR: The greatest lesson probably during that time was just remaining true to where I came from, and making sure that I had somewhere to go back to. I had a core group of people that I stuck with through that time, and that was important for me, because it grounded me during that experience, even though – we talked about this – the kids nowadays are so much more aware of what they’re doing. But still, I was on television. I was adored by 2,500 people at a mall once. [laughs] It was a good time. But I still had people who said, quote-unquote, “You ain’t shit.” And that’s what I came back to. And that kind of grounded me to be the person I am today.

AX: Did you make a conscious decision to continue acting?

GOSSELAAR: I made a decision when I was nineteen, because at the time, everything was just under my parents’ wing. And then when I moved out of the house, I decided to become an actor. Up until then, like I said, it was just something I did. But it was a financial thing, and I realized I like playing characters, and I like the collaboration of it all. But at the time, the simple answer was, it was financially lucrative for a nineteen-year-old, who was either going to get a job doing something else and have to start over again, or continuing in the career that I already had.

AX: Did NYPD BLUE change things for you as an actor?

GOSSELAAR: Yes. I didn’t think I deserved it at that point, especially to work on a Steven Bochco show. I thought he was absolutely crazy to hire two child stars [Gosselaar followed Rich Schroeder] to play back-to-back Sipowicz’s [Dennis Franz] partners [on the police force]. Over time, I felt more comfortable in the skin, but it was a big step. At the time, people on Internet message boards were saying that I was going to ruin the show, and I believed them in a certain sense. And then as the show, and Dennis, being sort of my mentor, as well as Steven Bochco, I grew into that skin and felt more confident. And that really launched my young adult career.

AX: Back to MIXED-ISH, what is Paul’s mindset about not being able to live in the commune anymore?

GOSSELAAR: Well, I think he’s trying to stay true to a former part of himself, but – I’m not a show runner, I’m not a creator of the show – I think at some point, Paul is going to have to adapt. But I think a very smart thing the creators of this show did was making sure this family was in a commune before we actually see them. Because it’s fun to watch people take their first steps. And so looking at fish out of water, that’s always a great way to inject comedy into these issues that we’re dealing with that are pretty serious. We’re dealing with affirmative action, white privilege, race, gender. But when we have the backdrop of this family of being green and naïve and coming off of a commune, and seeing this for the first time, we can still inject the comedy.

AX: What is Paul’s attitude towards his conservative dad?

GOSSELAAR: I think he’s sort of fighting having come from white privilege, and sort of fighting that, and one of the reasons why he went into the commune is because he didn’t want to be, as he said, a capitalist conservative. But Gary Cole’s character, we need that to show the other side, and as well, we need the complete other side, being Denise, played by Christina Anthony. It’s such a smart show. One of the things, when I first saw it on the page, I’m like, “I have to be a part of this.”

AX: Do you feel half-hour comedy in general has changed since the last time you were working in it steadily?

GOSSELAAR: Half-hour has changed, but I think that’s only a byproduct of what’s on cable and streaming. I think the audiences are becoming much more sophisticated and demanding more, and I’m happy that shows that are on broadcast network are providing that, because I think we have an appetite for it. So I think that this show is a great example of that. I’m not part of the BLACK-ISH world, because I don’t watch broadcast television all that much, and I was pleasantly surprised when I read this script, and then did research into the BLACK-ISH world that this type of comedy is on network television. We need more of it.

AX: And what would you most like people to know about MIXED-ISH?

GOSSELAAR: I’d like them to know that if you’re a fan of BLACK-ISH, you will have some more insight on your favorite characters, and if you’ve never watched an episode of BLACK-ISH, you can dive right in. It’s a singular vehicle that you’ll fall in love with.