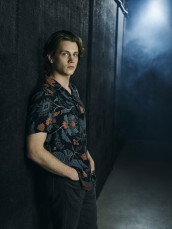 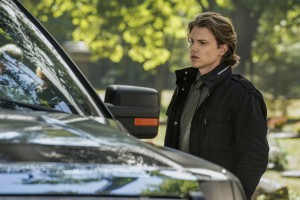 In The CW’s new Wednesday-night series NANCY DREW, based on the long-running series of novels by the pseudonymous Carolyn Keene, Nancy (Kennedy McMann) and her friends solve mysteries both natural and supernatural in the small town of Horseshoe Bay.

One of Nancy’s helpful friends and co-workers is diner worker Ace, played by Alex Saxon. Ace comes off as laid-back, but is actually very observant. Saxon, originally from Missouri, was a series regular on FINDING CARTER and THE FIX, and had arcs on RAY DONOVAN and THE FOSTERS.

ASSIGNMENT X: Were you aware of and/or a fan of the NANCY DREW books before you became involved with the series?

ALEX SAXON: I was very aware of it. I remember my mom telling me about the first book she read, and even other people in my life, my managers and my dad being familiar with THE HARDY BOYS. And by the time I was in elementary school, I knew the section where all of those books were. I can’t say that I read NANCY DREW at that time, but I was certainly familiar, from a very young age.

AX: Are you a mystery genre fan?

SAXON: I like crime mysteries. In terms of literature, I love Michael Crichton in terms of sci-fi. But for crime drama, I really love Jeffery Deaver. I’ve read all of his Lincoln Rhyme novels, and then even the spinoff Kathryn Dance, from a very young age. I love all of Jeffery Deaver’s books. 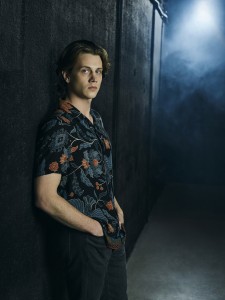 AX: In NANCY DREW, are you patterning the character of Ace after anybody in particular?

SAXON: No. I show up with whatever script they’ve written, and see what happens on the day.

AX: So far, Ace seems friendly, but a little removed from everybody else. Is that the case, or is he just sort of a go-along, get-along guy?

SAXON: I think some would say that he’s a step ahead of everybody else.

AX: So he’s just kind of presenting a mellow persona?

SAXON: Yeah. I think you’ll see as the series goes on, he’s not a loop. He’s aces, clocking everything, and is really out to help his friends get out of this bind.

AX: The audience can see that there are ghosts. Does Ace believe in ghosts? Does he believe something supernatural is happening?

SAXON: Ace is sort of the keeper of the lore. He’s familiar with all the ghost stories and the town legends, as well as being familiar with how things work around the town. So I think he gives them all their credit, their due.

AX: As Nancy starts to investigate things that could be dangerous, does Ace feel like, “Go, Team Nancy!” or does he think, “Nancy, you’re messing with stuff that shouldn’t be messed with”?

SAXON: No, he’s supporting Nancy. He’s taking care of her.

AX: Does he have an interest in seeing justice done, or is he mostly just supporting Nancy?

SAXON: I think they’re one and the same. He’s the only one with an alibi [for a murder], as we start out the season, and he’s not going to let his friends flap in the wind. So he’s looking out for everybody’s best interests. 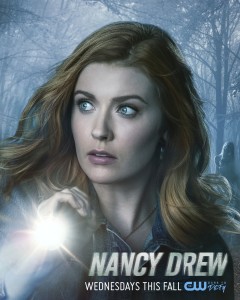 AX: How does Ace feel about George, his demanding boss, who’s played by Leah Lewis? Does he think she’s too harsh, or does he just let it roll off him?

SAXON: I think he sees her for what she is, and doesn’t take it personally.

AX: Did you have to learn how to do anything in order to play Alex, like how to work in the kitchen?

SAXON: No, I didn’t. I was a busboy at a couple of restaurants in L.A., so my main go-between was the dishwasher. So he and I had ongoing conversations all day long, with me bringing him the dishes to clean up. So I’m familiar with how the back works.

AX: Was there ever a moment of feeling like, “Man, I was working as a busboy, and hoping to get to work as an actor, and now I’m working an actor, but here I am back in the kitchen”?

SAXON: That’s funny. I had enough other jobs besides being a busboy that that’s probably tempered, but it’ a very good point.

AX: How is working in a little coastal town? Does it help you get into the groove of the series?

SAXON: I think Vancouver in general lends itself to this sort of mysterious atmosphere. It has all these old-growth forests and I’m familiar with the Haida indigenous people up there. There are a lot of crazy things that have happened over the centuries, and I feel like it’s all sort of contained. We’ve been working mostly in the summer thus far, but the fog, the rain, the mist, the clouds – it lends a certain eeriness, just being there.

AX: And do you have any other projects going on right now that we should know about?