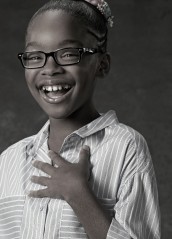 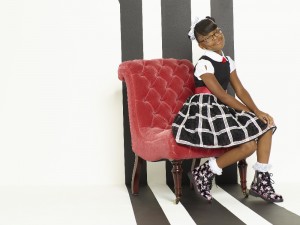 Marsai Martin plays younger daughter Diane Johnson on ABC’s half-hour comedy BLACK-ISH. The series, created by Kenya Barris, about an upper-middle-class black family, returns for the second half of its third season on Wednesday, January 11.

Diane’s parents are successful Dre (series executive producer Anthony Anderson) and doctor Bow (Tracee Ellis Ross). She has an older sister, college-bound Zoey (played by the likewise-higher-education-headed Yara Shahidi), and brothers Andre Jr. (Marcus Scribner) and Jack (Miles Brown). Grandparents Pops (Laurence Fishburne, another executive producer) and Ruby (Jenifer Lewis) are also often on hand as the family finds humor in topics like God, voting and if it’s ever acceptable for anyone to say the N word.

Martin, a native of Plano, Texas, has also starred in AN AMERICAN GIRL STORY – MELODY 1963: LOVE HAS TO WIN.

ASSIGNMENT X: Are you the same age as Diane, or are you older or younger than your character?

MARSAI MARTIN: I am older than Diane. I’m not really sure of her age. Diane might be nine this season. I’m twelve right now.

AX: Have your ideas about show business changed during the years you’ve been on BLACK-ISH?

AX: Are you enjoying it more now that you know more about it?

MARTIN: Oh, yeah. Yeah. I really am really focused on what’s going on now, more focused about what are the consequences that might happen, or what’s going on, and what will happen if you do this or something like that [laughs].

AX: Were you excited when Jenifer Lewis joined the show as Ruby after it began?

MARTIN: Oh, heck, yeah [laughs]. I was very excited. I love Jenifer, I love Tracee, I love Anthony, Laurence – everybody. And I know her from previous shows I’ve seen, before BLACK-ISH. It’s very exciting and it’s incredible to be working with a great cast.

AX: Do you have a favorite scene or episode from this past season?

AX: Do you have a preference for the episodes where it’s just the family going through family issues, or ones where the episodes are about a particular topic?

MARTIN: Probably a particular topic, like the Republican episode, with the politicians and stuff.

MARTIN: Yeah. Absolute yes. I’m not sure what an older Marsai would want, but with me, I probably want to keep on acting, because that’s my passion. I probably might do more things like singing and directing and [work] in the entertainment industry more.

AX: Are there any actors you’ve particularly studied, or did you study anything to be able to do the work you do now?

MARTIN: Not really “study,” but I know a lot of actors. The actors I work with, I ask them questions a little bit, just to work on my acting skills and to become better at what I’m supposed to do.

AX: What kind of questions do you ask the actors you work with?

MARTIN: “How do you cry on demand?” Stuff like that.

AX: And what would you most like people to know about BLACK-ISH?

MARTIN: That it is a family show. It’s all about family and what goes on in real life.