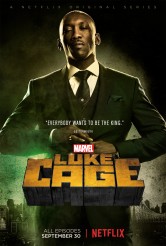 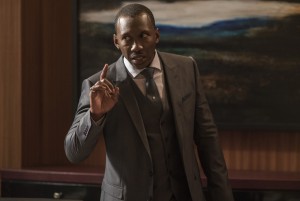 Mahershala Ali is having quite a year. The actor from Oakland, California – first name pronounced Mah-HER-shah-lah – has a Golden Globe nomination and Oscar buzz for his performance as a compassionate drug dealer in the film MOONLIGHT. Ali also plays the love interest of Taraji P. Henson’s NASA math genius Katherine Johnson in HIDDEN FIGURES. Earlier this year, Ali appeared in KICKS and THE FREE STATE OF JONES, and he plays Remy Danton in Netflix’s HOUSE OF CARDS.

However, Ali is at Netflix’s portion of the Television Critics Association press tour to talk about his role as Cornell “Cottonmouth” Stokes in LUKE CAGE. LUKE CAGE is part of the Marvel Comics Universe, with a title hero, played by Mike Colter, who has indestructible skin and was previously part of JESSICA JONES. Stokes is a Harlem crime lord who resents Cage’s activities. Stokes is also the cousin of local city councilwoman Mariah Dillard, played by Alfre Woodard.

ASSIGNMENT X: What was your Comic-Con experience like with LUKE CAGE?

MAHERSHALA ALI: Say we were DAREDEVIL coming to Comic-Con after having had two seasons, I think it’s a whole ‘nother thing. They don’t know us. They don’t know who I am in relation to the series. They don’t know who Alfre plays. They don’t really quite get it, but they know Mike. And that’s enough to kind of enter into the door, but in terms of how we all fit together and what our part is, that is unclear to them at this point.

AX: Is this superhero genre a genre that you particularly like?

ALI: I like the material. So it can be the Marvel superhero world, it can be sci-fi. I think I really naturally gravitate to drama, and what I appreciate about this and what Marvel is doing a really good job of is really organically rooting these superheroes in the real world, where an actor like myself feels like I’m just doing a drama, and this guy happens to be able to take this door off of this car very easily. So it’s not anything that seems too unrealistic to me. So I’m loving being in this world.

AX: How worried is Cornell about this world that now has enhanced people like Luke Cage in it? That is, is Cornell just focused enough on his business that the stuff about the enhanced people is just like what’s going on in some other part of the world, or is he worried more about it than that?

ALI: At first, I don’t think he’s worried, but then I think he gets more and more concerned as time goes on, because it definitely affects his ability to operate his business and to be able to move throughout the city with the freedom and mobility and the flexibility that he had once had, and to wield his power the way in which he once did. So Luke has interrupted the flow of business and the money stream.

AX: Do you think that Cornell is a person of his time – that is, the twenty-first century – or is there something a little bit timeless about him? Because when we’re in his club, the music is different, of course, but in a way, it’s almost like BOARDWALK EMPIRE.

ALI: Yeah. I think those people just exist. I think there are always going to be people who just exist on the fringes, who brush up, rub up against the law. Because I think why there has always been the Cornell “Cottonmouth” Stokes in existence is because there are always people who looked at the lawmakers, the government, the powers that be as being as corrupt as they [the law breakers] are viewed to be. So they don’t necessarily feel like going along with these rules of just being obedient and acquiescing to the laws that are set up by the powers that be when they are also corrupt. So he’s going to write his own laws. He’s going to live by his own rules, he’s going to live on his own terms. And so in that way, I think he is timeless. I think there will always be people like that, who will view the authority of people in power with a certain degree of skepticism, and therefore do exactly what it is that they want to do. And to some degree, that’s very dangerous. And that’s not a choice that I would make, but I could see why Cottonmouth makes the choices that he does.

AX: What would you most like people to know about LUKE CAGE?

ALI: That they are going to see something that they haven’t to this point seen in television or in series work, for a number of reasons. One, Cheo [Hodari Coker], the show runner, and the narrative he’s arced out, but also Mike Colter does such a wonderful job. I was really excited to work with this cast, and I think together, we all bring something to it to make it its own thing, and hopefully, we’ll leave them with a story that will leave an indelible impression upon them. Because I do believe this is a unique effort.