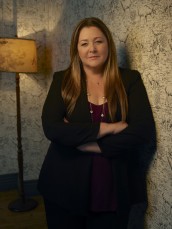 The scoop on the new ABC Cobie Smulders drama series 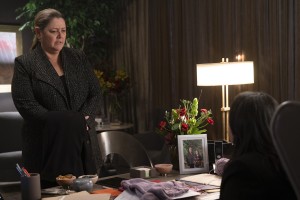 In turn, Miles often finds that his association with Dex puts him at odds with his boss, Lieutenant Cosgrove, played by Camryn Manheim.

Manheim, who grew up in Illinois and California, is no stranger to legal drama, having spent eight years and won an Emmy for her work playing lawyer Eleanor Frutt on THE PRACTICE. She was nominated for another Emmy for playing Gladys Presley in the miniseries ELVIS. More recent roles include an arc on PERSON OF INTEREST as the sinister Control, a series regular gig on LIVING BIBLICALLY, and an arc as one of the title characters on THE MAGICIANS. Manheim’s film work includes RETURN TO SENDER, SLIPSTREAM, and HAPPINESS.

ASSIGNMENT X: You spent quite a while playing a lawyer, and now you’re playing a police lieutenant. Can you compare the types of power involved with those characters?

CAMRYN MANHEIM: I have to say, I’ve made a wonderful living out of playing female badasses. To be honest, I feel like you have way more power as a lawyer than you do as a police lieutenant. A lawyer can be creative, and tell a story, weave a circumstance, paint a picture, and a lieutenant is just playing by the book.

AX: So are you saying to the STUMPTOWN producers, “Can I get into a car chase?”

MANHEIM: Well, car chases are really fun, but I’m really happy to have a home base, and have people come to me, and be the foil to all of the immaturity and shenanigans that go on in our storylines.

AX: Speaking of home base, do you feel ownership of the lieutenant’s office?

MANHEIM: I definitely feel ownership of my office. That’s really funny you should ask, because sometimes I’ll be on set, and I’ll walk into my office, and a crew member will be sleeping on the couch. I’m like, “Have some respect.” [laughs] It’s no more my office that it is theirs. My picture’s on the desk, and my diploma’s on the wall, but to be honest, I share it with the crew, because they’re tired and they deserve a good couch to sleep on. 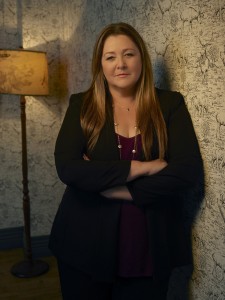 AX: It’s implied that Lieutenant Cosgrove has a lot of history. Have you decided for yourself what that history is, or have they told you?

MANHEIM: We do not have a lot of information about our characters, in the past or moving forward. I don’t know that they’re withholding it, it’s just that they need to keep it slightly vague, so if they want to draw upon it for a story or two – my understanding is that she’s married with kids, and moved from Philadelphia to Portland for a better life for the family, and her marriage is a little lackluster, and they’re leaving it open for any myriad of stories to happen at the right time.

AX: Lieutenant Cosgrove clearly has some contentious history with tribal representative and casino CEO Sue Lynn Blackbird, played by Tantoo Cardinal. Is that just the clash of jurisdictions, or is there more there?

MANHEIM: No, it’s mostly the jurisdictional clash. Any time we [the police] get close to uncovering or solving any kind of mystery, she steps in and takes it away from us, and snatches the rug from under our feet, and there’s nothing I can do about it. It’s very frustrating. We do a lot of work, and pay a lot of attention, and spend a lot of resources on cases, and then just as we’re about to tie them up, Sue Lynn steps in with her army and says, “This is out of your …” And it could just be on a street, on a block, on a corner. It belongs somehow to the tribe, and we can’t touch it. And obviously, Sue Lynn isn’t operating above the law, and so it is a complicated relationship.

AX: Have you had to learn anything to play a police officer, like about how to use a gun?

MANHEIM: No, because I learned that on PERSON OF INTEREST. I had big training in the use of a gun there.

AX: Yeah, you were a real badass as that character.

MANHEIM: I know. This is like, I’m a pussycat compared to Control.

AX: After all those years of playing a lawyer, was there anything you needed to learn about the law in order to play STUMPTOWN’s police lieutenant?

MANHEIM: I mean, other than a few terms that I don’t always know what they mean and I have to inquire about it, I think having played a lawyer for eight years and going through the [PRACTICE creator] David E. Kelley School of Law, I have encountered a lot of legal matters. Mostly, I had to learn a lot more about Portland. Since [the story is] based in Portland, there’s just a lot going on in that city, and a lot of idiosyncratic things that happen in Portland that you might read in a script and have no idea what they mean, and so we’re learning more about that city.

AX: What’s the most interesting thing you’ve learned about Portland?

MANHEIM: Well, in my own research, what I’ve learned about Portland is that there is a real underbelly of crime, of neo-Nazism, of a lot of disturbing things happening in the underground. We always thought of Portland as Birkenstocks and coffee and peace and love, but there are a lot of clashes going on in that area right now, gentrification and some racism that I learned a lot about through my own research.

MANHEIM: I’ve got a couple of things that are to be released. I did an Amazon show called UTOPIA that I’m very excited about, and an independent movie called KILLING ELEANOR that I’m excited about, and I recently was elected Secretary/Treasurer of SAG-AFTRA, and I’ve been working very hard, learning all about the union, and labor law, and it’s been very interesting.

AX: And what would you most like people to know about the back half of STUMPTOWN’s first season?

MANHEIM: All I can say is, they know as much as I do [laughs]. I mean, it’s more of the love triangle, more of discovering Grey, more of flawed people trying to do the right thing. It’s a lot of that. And unbelievable guest stars.