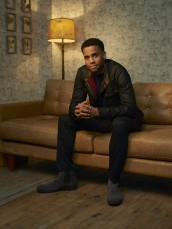 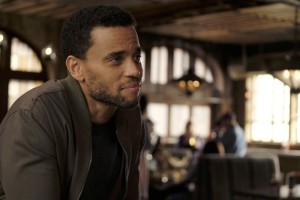 In ABC’s new Wednesday-night drama STUMPTOWN, adapted from Greg Rucka’s graphic novels, Cobie Smulders stars as Dex Parios. Dex is a bartender turned novice but tough private investigator operating in Portland, Oregon. (Portland is known as Stumptown due to its origins as a logging camp.) Michael Ealy plays Portland police detective Miles Hoffman, who doesn’t quite know what to make of his rule-breaking new acquaintance, especially when she shows up at his home late at night for no-strings sex.

Ealy, originally from Maryland, is no stranger to playing law enforcement personnel, including series leads as an undercover FBI agent in SLEEPER CELL and an android police officer in ALMOST HUMAN. On the big screen, Ealy has starred in the BARBERSHOP and THINK LIKE A MAN comedy franchises, as well as thrillers like THE PERFECT GUY and this year’s THE INTRUDER and the JACOB’S LADDER remake.

MICHAEL EALY: I haven’t counted, but I think it’s third police detective. I’ve been law enforcement – FBI, CIA, all of them.

AX: And also, in THE INTRUDER, somebody who really should have used a realtor.

EALY: [laughs] Yeah. I don’t know if a realtor would have helped, you know what I mean? [The title character, a psychotic homeowner played by Dennis Quaid] wouldn’t leave.

AX: Were you familiar with the graphic novels that STUMPTOWN is based on?

EALY: No, I wasn’t familiar with the graphic novels, and that was actually part of the appeal. I’ve never worked in this world before, whether it’s a graphic novel or a comic book world. I think ALMOST HUMAN was my first delve into the sci-fi world, and I was really excited about the potential for that one. But with STUMPTOWN, it’s a known I.P., and I got to meet Greg Rucka, the author, in Portland when we were shooting there, and then at Comic Con, and realized he’s a legend. As soon as the announcement was made, all my comic book friends called me up to tell me, “I love STUMPTOWN. This is amazing. You have no idea what’s happening right now.” [laughs] So I’m excited to see where it goes. 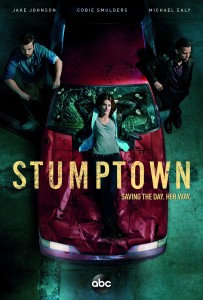 AX: Have you read the STUMPTOWN graphic novels to see where your character may be going?

EALY: Yeah. I read the first one before I said “Yes.” And now that we’re starting back up, I’m going to probably read the other three.

AX: Is there more to Detective Miles Hoffman than we see in the pilot?

EALY: Oh, yeah. And that’s another thing. I read the pilot, and I remember feeling like, “Hmm. This character’s kind of underwritten.” But I could tell by what ABC was saying that he would be impactful. So I looked at it from a standpoint of, well, if they’re going to bring me onboard, and they’re telling me I’m going to be impactful, him being underwritten is by design. And ultimately, I had a good conversation with [writer/executive producer] Jason [Richman], the writers and the producers, and now I know where he is and I’m glad I did. But what I enjoyed most was not knowing. I’ve read a lot of pilots, and they’re like, “I know exactly where this character is going. I guarantee by Season 2, he’s going to be alcoholic, da, da, da, da.” So it was cool. Because now I feel like I have somewhere to go that’s kind of unpredictable. And I think after you see the pilot, you don’t know what’s going to happen next.

AX: There seems to be a very complicated relationship between the Portland police department and the casino that is on nearby Native American tribal land. We learn in the pilot that Dex has her own complicated relationship with the people who run the casino. Is Miles in any way using Dex to influence the situation with the people on the reservation? [silence] I’m getting a non-response that suggests the answer is “yes.”

EALY: I don’t know if it’s as specific as that. But I do think there’s a fine line – I think you see it in the pilot – between using her to get the information you need, and getting what you need [laughs].

AX: Speaking of getting what you need, what is his reaction when she shows up at the door late at night?

EALY: I think there’s a little bit of shock on his part, because it is late at night, and he’s thinking to himself, “Why couldn’t we have done all this another time?” [laughs] But there’s a kindred spirit between these two that hasn’t quite been explained yet. And I feel like the connection and the chemistry is there from the beginning, which is interesting, because in a lot of shows like this, you’ll see that chemistry play out over a whole season, and it builds tension. And what I like is, we get right to it immediately, and now you’re living in the fallout.

AX: What is Miles’s relationship like with Blackbird family, who run the casino on tribal land? Because obviously, there is a relationship there.

EALY: Yeah. I think there’s some frustration with Sue Lynn [the Blackbird family matriarch, played by Tantoo Cardinal] and the way the laws are set up, because [as a city police detective] you really don’t have any jurisdiction [on sovereign tribal land]. So it’s weird for them to need your help, but at the same time, want to keep you at arm’s length. So that’s an interesting dynamic, but I’m all for the native people’s representation in this show, because we haven’t seen it, ever. 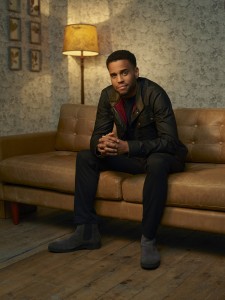 AX: And Tantoo Cardinal is …

EALY: She is a legend, and she is the perfect person to bring this character to life.

EALY: The most I had to learn was kind of the tone of the world, right? Because the graphic novel world, if you watch how they translate into movies and television shows, there’s a tone there. If you watch how the comic books translate into movies, there’s a tone there. And I think it’s important to find that tone. But in terms of the detective work, I’ve done that research for other roles. I think it can transfer over.

AX: Did you have some idea of who Cobie Smulders was before you began working with her on STUMPTOWN?

EALY: I did. I knew she was on HOW I MET YOUR MOTHER, I knew she was in THE AVENGERS. I didn’t know she was in JACK REACHER, but I did know that she was on FRIENDS FROM COLLEGE and I’ve been loosely been following her work, but nothing could prepare me for Day One, when we started to work together, and I looked in her eyes, and saw how committed she was, and how good she is. She’s so amazing in this role.

AX: Does your character Miles have any sort of relationship with Jake Johnson’s bar owner character Grey McConnell? Or is that something we find out later? Stay tuned?

EALY: Yeah. Right now, they have Dex in common. And where that goes is a definite stay tuned [laughs].

EALY: Yeah. There’s another movie called FATALE, with Hilary Swank and Mike Colter, and that’ll be out, I think, in the spring of 2020.

EALY: I want people to give STUMPTOWN a chance and know it’s a show that’s set in a world that’s hyper-real, in a city that hasn’t been oversaturated by productions for the last fifty years. There’s an homage to Portland that’s in this show, and it’s done in all the right ways. I think the people of Portland will actually enjoy this show. And so that makes it more authentic, and I think at the end of the day, it’s something we haven’t seen before. I think Cobie’s character is so tangible and relatable. For example, she’s not the kind of character you aspire to be [laughs]. She’s more like the character you are.