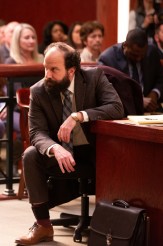 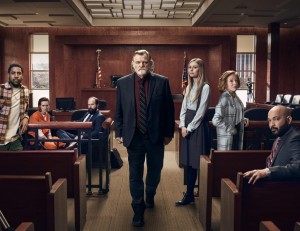 In Season 3 of MR. MERCEDES, Tuesdays on AT&T Audience Network, the story is about equally divided between our heroes’ investigation into new murders, and the murder trial of Lou Linklatter (Breeda Wool).

Brett Gelman plays Lou’s lawyer, Roland Finkelstein. The role is a bit of a change of pace for Gelman, who more often works in comedy, including the Emmy-winning FLEABAG. Gelman, also a writer and producer, co-scripted as well as starred in the feature LEMON, and wrote on the series THE ERIC ANDRE SHOW and NICK CANNON PRESENTS: SHORT CIRCUITZ. As an actor, Gelman’s work includes roles in the films THE OTHER GUYS, A VERY HAROLD & KUMAR 3D CHRISTMAS, and JOBS, and series regular characters on THE INBETWEENERS, GO ON, EAGLEHEART, BLUNT TALK, ANOTHER PERIOD, and CAMPING. Gelman also narrates the just-released comedic horror film HARPOON.

Praising MR. MERCEDES’s director/executive producer Jack Bender, Gelman puts him in the company of other directors Gelman has worked with as an actor, which serves to provide a partial credits list. “[Bender] is [similar in quality to] the Duffers [on STRANGER THINGS] and Harry Bradbeer [on FLEABAG] and Janicza Bravo [on LEMON, which she co-wrote with Gelman] and Judd Apatow [on the Netflix series LOVE] and Adam McKay [on THE OTHER GUYS] and David Lynch [on TWIN PEAKS: THE RETURN] – I’m lucky to have worked with all these incredible directors. Jack is one of the greatest. There’s nobody like Jack. He’s one of the best directors [and] people that I’ve ever worked with. I learned a tremendous amount working with him.”

ASSIGNMENT X: Can you say what you’ve learned working with Jack Bender?

BRETT GELMAN: He really brings a simplicity to the thinking of the scene, and there is a somewhat “just do it” mentality, yet being fully invested psychologically in what the character is doing. And I have learned an incredible amount about stillness and simplicity on this show. And he really led me through to playing a good guy, which is not something I do very often. So it’s just the smallest adjustment. And that’s what I’ve learned from many of the great directors that I’ve worked with. I’ve been very lucky.

AX: So did you do STRANGER THINGS and then MR. MERCEDES, or the other way around?

GELMAN: No, I did STRANGER THINGS and then MR. MERCEDES.

AX: MR. MERCEDES is derived from a trilogy of Stephen King novels, and STRANGER THINGS is partially inspired by King’s work, even though it’s created by the Duffer Brothers. Did you feel in any way like you were still in the same kind of universe there on those two shows?

GELMAN: I didn’t, because I’m just so lucky that the two creators of those shows, the worlds in which they create are so unto themselves. The world that the Duffers create is so different from the world that David [E. Kelley, who developed MR. MERCEDES for TV] and Jack create. So it’s exciting. Jack brushed the experience of STRANGER THINGS off pretty quick, because I had to jump into this.

AX: Who is your character in STRANGER THINGS?

AX: For MR. MERCEDES, did you do any research to play an attorney? Did you talk to anybody or read anything? You have said that you watched some specific film performances – Paul Newman in THE VERDICT, Spencer Tracy in INHERIT THE WIND – to help you with the character …

GELMAN: Yeah. Obviously, I looked up all the legalese and definitely asked questions about the process, but I thought it was really important that we’re not making Court TV here. I’m essentially in a courtroom drama in this show, and so I really wanted to see how actors that I really look up to dealt with that. And what I found was that it’s really all about emotional connection to what you’re talking about, the personalization of the case or the client, and really just hammering into it.

AX: Because David E. Kelley, who developed MR. MERCEDES as a series, has obviously done a lot of legal shows, did you look at any of his prior material? 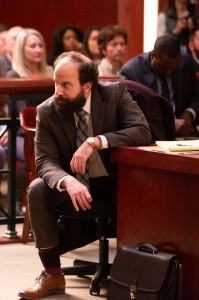 AX: The audience knows that Lou was trying to stop an actual supernatural menace when she killed Brady Hartsfield last season, but what is Finkelstein’s attitude towards Lou? Does he think that she’s disturbed, does he think that she was in genuine fear for her life …?

GELMAN: My character? I think that he’s concerned for her. I think he is somebody who is not quick to judge, and wants to be open to all possibilities, but also is very afraid that she’s losing her mind.

AX: Does he know what’s actually going on? Does he think he has an idea of what’s going on? Or does he actually not know?

AX: Well, the whole history of why Lou thought it was a good idea to kill Brady.

GELMAN: I think that he has somewhat of an idea of what’s going on, but is also not so sure where the things she’s saying are coming from.

AX: So he does not know, or believe in, what the audience knows?

GELMAN: No. I think he’s open to what that could be, but to commit to believing in that would make him crazy, but he also has a feeling of, “Well, whatever is going to get her out of there is important.” And I think he sees – more than, “Is this the truth?”, he sees her episodes [of seeing Brady’s ghost] as a threat to her own safety.

AX: And what is Finkelstein’s opinion of Bill Hodges, the detective played by Brendan Gleeson, who is Lou’s friend, but who contributed to her being in her current predicament?

GELMAN: I think that he respects Hodges, and knows in a way that, in order to gain Lou’s trust, he somewhat has to have Hodges’s trust, too, and knows that Hodges is an asset in to helping Lou become [legally] innocent, because [Hodges] is the leader of the pack, obviously. And I think that I recognize him as that. But I also think that Hodges doesn’t process his emotions well [laughs] and is kind of a bull of a man. But he means well. I don’t think Finkelstein sees him as a bad guy.

AX: The plot of Season 3 of MR. MERCEDES is set in motion by the murder of writer John Rothstein, a Philip Roth-type figure played by Bruce Dern. Does Finkelstein have any opinion of John Rothstein as a writer?

AX: What type of literature do you think he’s reading?

GELMAN: I think he’s reading older things. But also political things. I think Finkelstein is a big James Baldwin fan. But then also a big fan of Noam Chomsky [laughs].

AX: And what would you most like people to know about Season 3 of MR. MERCEDES?