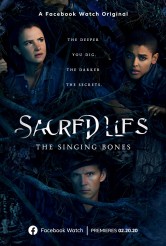 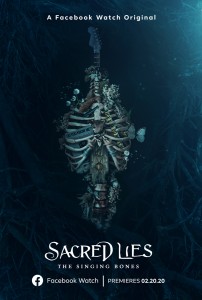 SACRED LIES is Tucker’s first series as a creator, although she has been a writer/producer on other shows including THE RETURNED and JESSICA JONES. When Tucker was working on TRUE BLOOD, she met Scott Winant, who directed thirteen episodes of that series. Winant’s directing/executive producing credits include GOOD GIRLS REVOLT, SAVE ME, CALIFORNICATION and HUFF. Tucker and Winant have teamed up to executive produce SACRED LIES. As with the first season, Winant is directing four episodes of SACRED LIES: THE SINGING BONES.

ASSIGNMENT X: The first season of SACRED LIES was based on the novel THE SACRED LIES OF MINNOW BLY, which was in turn based on “The Handless Maiden.” Is SACRED LIES: THE SINGING BONES based on a book as well, or is the story just extrapolated from mythology?

RAELLE TUCKER: This season is based solely on the Grimm fairytale “The Singing Bone,” and actual cases that I researched. So it’s inspired by both those things, and then is a totally fictional story that we wove together.

AX: Had the two of you been looking to do something together since TRUE BLOOD, or did you re-encounter each other afterwards and go, “Hey, let’s make a show”?

SCOTT WINANT: No, I remember us having lunch, and agreeing that we both loved fairytales. And that was way before the book [THE SACRED LIES OF MINNOW BLY], right?

TUCKER: Yes. Scott and I were always going to make a show together. We had to find the right one. I optioned the book from last season and ran with it, and once we had gotten to a place where it was a script, I went to Scott Winant directly, and asked him to come aboard before we sold it to Facebook Watch. 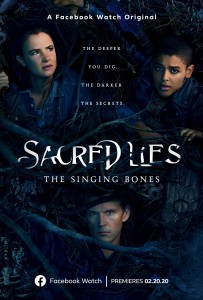 AX: Does Facebook Watch have any input into the material?

TUCKER: Absolutely. Facebook Watch is much like any other network, Netflix or elsewhere. They have a point of view, they give notes, they are trying to make sure that the show works, and fits in with the image they have of the show. But I will say, I have worked in television for eighteen years. They unquestionably have given me the most room to be a creator of anywhere else I’ve ever worked. They really let me tell the stories I want to tell. They always trust me if I fight for something, they back off if I tell them they’re wrong. So it’s been an incredibly rewarding experience for me.

WINANT: They’ve been very generous, both creatively and financially. Facebook Watch is a good partner.

AX: When did Blumhouse come into it?

TUCKER: After we sold the show to Facebook Watch, we needed a studio, and so it seemed like a really smart partnership, based on where Blumhouse is heading. They’re heading into the premium space in television, and they were hungry and excited to find new, edgy material that went to a dark place. They’ve made some incredible, really sophisticated series, so they were great partners for us.

TUCKER: I think there were a lot of things that we carried over from Season 1, primarily the tone and the heart and the feel of the show, the dark fairytale elements, combined with the pulse of a very current crime-based story. Also, with our visual department, many of our department heads were the same, so Cynthia Pusheck was our director of photography. She brought the same beautiful, lush, incredible look to the show. Our production designer, Ken Rempel, was the same. And obviously, Scott Winant carried through directing the initial two episodes and really setting up the show. So the important thing to carry through for our fans was to tell a story that had the same amount of heart, the same amount of grounded kind of magic and escapism, combined with something that was also meaningful and emotional, and had a story to tell that was important and timely.

WINANT: And on a visual level, we wanted the show to feel lyrical, and to have the specific tone of the first season, and all the directors who worked on the show embraced that, and brought something unique to each episode. The episodes vary somewhat, so the tone shifts, but always returns. There is a semi-magical quality, but the truth is, everything is grounded. Everything is on the ground and real. 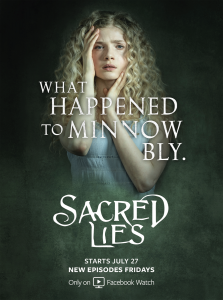 AX: Is there anything you have to do as a director to make it specific to SACRED LIES, whether it’s having the actors move in a certain way, or certain kinds of lighting?

WINANT: Here’s the thing, and I’ll have to confess this. When I read a script from Raelle Tucker, it becomes very clear to me visually what I’m going to do. Having that sort of connection – not so much with the material as it is with the creator of the material – I start to understand what it feels like and what it looks like. I can tell you in detail. We found ourselves moving in and shooting closer and wider. We found ourselves not living in the middle very much, visually, and we also found light source to be hugely important. If a character is entering from a doorway, and the person who’s watching him enter has some baggage with that person, the lighting is affected by that perception. So a lot of point of view, and a respect for the material. I think every director that worked on the show was stimulated by the material.

AX: You’re directing four episodes this season – how many did you do last season?

AX: Is another significant element of SACRED LIES having a young female protagonist who is in opposition to adults who are doing almost literally unspeakable things?

TUCKER: I definitely think that’s part of the DNA. I’m always intrigued by the fairytale ingenue and what a modernization of that is. How do you take the princess, and [make her story work in today’s world]? Last year, she became a double amputee. This year, she’s a foster child. We are talking about real issues through this sort of trope of the fairytale ingenue. That’s always exciting and interesting to me, and I’m again interested in talking about unusual strange connectivity and relationships that happen between people that wouldn’t otherwise meet or know each other.

The heroes of the shows I want to do are not the heroes of anybody else’s shows. They’re the telemarketer, they’re the girl with anger management problems who’s living in a foster home in Colorado. These are not the people who’ve been the stars of your shows. And I want to tell their stories, and I think that’s part of the DNA of SACRED LIES, and another big part is the fairytale tone, and the kind of thriller engine, mystery engine that lives underneath it.

AX: How did you come to make one of your main characters a telemarketer? Did you think, “Okay, if somebody is a detective in their spare time, what is the most depressing day job they could possibly have?”

TUCKER: Yeah. I actually am always fascinated with the idea of telemarketers, who’s on the other side of that phone call. Because they’re one of the few people that we actual decided it’s okay to be really mean to. We are cruel to them all the time, because they’re interfering in our lives, but the truth is, these are just people who are trying to make a living and do a job. So I’ve always been interested in exploring who’s on the other side of that phone.

WINANT: And we’ve got that group.

TUCKER: It starts with a conception of what the show is, and what it’s going to be about, and what was really important to me was to tell a story about family. And other than food and water, one of our primary needs in life is family and connectivity, and being part of a tribe, and yet we’re so weirdly disconnected in the world, and isolated. And so I knew I wanted to tell a story about people searching for that. So it’s really easy, because you start with people that are isolated, people that don’t have the kind of families that you see on television generally, and you bring them together, and that’s how the characters are dictated, is by, what is the emotional story I’m trying to tell? Why is this meaningful? And from there, people emerge.

AX: In this season of SACRED LIES, you’ve brought in Ryan Kwanten and Kristin Bauer, who were both series regulars on TRUE BLOOD. Was it just that that they were right for the characters, or did you create their characters for them?

TUCKER: The character I created for Kristin Bauer was written specifically for Kristen Bauer. Ryan Kwanten was on another show when I was originally casting, so I didn’t think I would be able to get him, but he was absolutely right for it, and it just happened that the timing worked out. This is the thing – when you work in our business, it’s a wonderful thing when you find people that you love to collaborate with. Like Scott and I love to work together, and these are actors that we had seven years together. We became like family. So you’re always looking for an opportunity to put them into something. But it’s finding the right moments where they really fit, where they can really shine in the right part, and this was just really good timing for us.

WINANT: And it’s nice, because we know their potential. We worked with them for seven years [when they were on TRUE BLOOD], playing a singular character, but we saw their work, and it’s exciting to give them something different to play.

AX: Are you shooting Season 2 in the same place that you shot Season 1?

TUCKER: Yeah, we shot both seasons in Canada, in Vancouver.

AX: Does shooting in Vancouver give you a fairytale quality that shooting in L.A. would not?

WINANT: Yeah, I would say so. Look, it’s a fairytale. There are woods involved. And Vancouver has woods, and snow, and rain, and all the elements that L.A. doesn’t. That’s why they started making movies here [in Los Angeles]. It was sunny every day. Our show is a lot moodier than that. And we had a great crew up in Vancouver. We brought back almost everybody from the first season. We shot in the same studio space as we did the first season.

TUCKER: We had the same line producer, who absolutely influenced so much of the show, Jim O’Grady.

WINANT: Jim O’Grady is one of the best producers I’ve ever worked with. And we had a family up there. It’s the kind of thing we strive for, when we work in this business, to have that kind of relationship. That’s the thing I’ll take away from SACRED LIES more than anything, is the people I worked with, and the process, and the creativity that we have.

AX: Do either or both of you have any other projects that we should know about?

TUCKER: Really, our focus right now is on launching this show, and getting people to really know that we’re here, and support this weird, strange, wonderful show.

AX: And what would you both most like people to know about SACRED LIES Season 2?

TUCKER: That it’s really effing good, and it’s unlike anything else on television or streaming, and it’s going to make you feel things. You’re going to be moved by the story, no matter what.

WINANT: The time and energy taken to really pay attention to SACRED LIES will pay off.

This interview was conducted during Blumhouse Television and Facebook Watch’s portion of the Winter 2020 Television Critics Association (TCA) press tour.

TV Review: SOUTH PARK - Season 15 - “Broadway Bro Down”
TCA 2012: NBC discusses the state of their Thursday night comedies THE...
MADAM SECRETARY producer Lori McCreary hails to the chief - Exclusive ...
WHAT WE DO IN THE SHADOWS: Natasia Demetriou takes a bite out of new F...