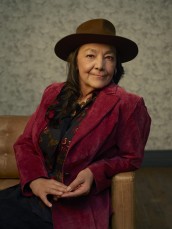 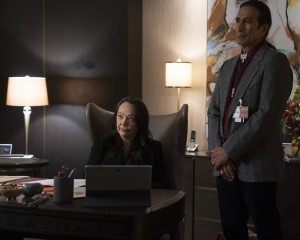 ABC’s new Wednesday-night detective drama STUMPTOWN is based on the graphic novels by Greg Rucka, Matthew Southworth, and Justin Greenwood, adapted for television by executive producer Jason Richman. Cobie Smulders stars as Dex Parios, a U.S. military vet who becomes a private eye in Portland, Oregon. Dex’s history is tied up with that of Tantoo Cardinal’s character, Sue Lynn Blackbird. Dex and Sue Lynn’s son were in love, but Sue Lynn broke up the relationship. This led indirectly to the son’s death, and Sue Lynn now seems to regret her actions way back when. When her granddaughter Nina (Blu Hunt) is kidnapped, Sue Lynn winds up relying on Dex to rescue her.

But Sue Lynn is no typical grandmother, or much of a typical anything, for that matter. As the CEO of the casino on the Native American reservation just outside of town, Sue Lynn is not easily pushed around, and not all of her activities are strictly legal.

Cardinal, originally from Alberta, Canada, is a member of the Order of Canada, one of that nation’s most prestigious civilian organizations. Cardinal first came to international attention with her role as Black Shawl in 1990’s DANCES WITH WOLVES. Her many credits since then include BLACK ROBE, BY WAY OF THE STARS, LEGENDS OF THE FALL, DR. QUINN MEDICINE WOMAN, MOCCASIN FLATS, BLACKSTONE, LONGMIRE, and OUTLANDER.

ASSIGNMENT X: Had you played a sort of matriarchal crime boss before STUMPTOWN?

TANTOO CARDINAL: No. I think this is my first run at it. 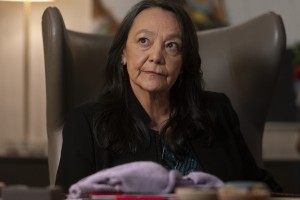 AX: Are there any gangster movies that you particularly like that you looked to for inspiration?

CARDINAL: No, no. I’m not going over there for inspiration. I’m going to the world I know, the women I know. So I don’t want to go watch some old movie that somebody’s already done, because we’re doing something that hasn’t been done.

AX: I personally don’t recall ever seeing a character exactly like Sue Lynn before …

CARDINAL: Yeah. I mean, it’s not like there are elements that we’ve never seen before. But this particular combination, that she comes from a world that not a lot of people know a lot about. That American Indian world is kind of separate from Main Street. So this is really a fun idea. I’m so excited that they’re actually doing it.

AX: She’s sort of the highest law unto herself, because the tribes have their own sovereign nations, right?

CARDINAL: Yes. She’s the CEO of the casino, but all the tribal members are owners. She has a huge responsibility, and she is a board member of the Confederated Tribes, so she’s involved politically and culturally. She’s got all of the legs of the still happening. And she’s a power broker. She’s got some stuff going on.

AX: Well, she’s a business person – some of that business seems to be a little under the table – and she’s also a political figure, and she’s a grandmother …

CARDINAL: That’s right. And whatever works is going to work, right?

AX: Do we know which tribe this is?

CARDINAL: No, we don’t. I think it’s generic for a reason, other than she’s from the Oregon area, so it gives us elements.

AX: Is the concern that if STUMPTOWN were specific about the tribe, it would look like something was being said about specific real people?

CARDINAL: Well, yeah. And then they’re like, “Well, we don’t do that,” or, “That doesn’t happen here.” Because this is based on a graphic novel, and yet the foundations of that community are definitely the foundations of what we’re creating. So that kind of gives us the freedom not to tack things right square down.

AX: Does Sue Lynn have any other children besides the son who died?

CARDINAL: No, I don’t think so. It doesn’t seem like it, but that’s something you have to ask Jason Richman. There’s been no mention of any other children. 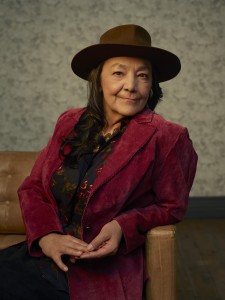 AX: STUMPTOWN is set in Portland, Oregon, and they’ve done some location shooting there, but where do you mostly shoot?

AX: Do you feel ownership of Sue Lynn’s primary sets? Do you come on and feel like, “This is my casino”?

CARDINAL: Well [at the time of this interview], I’ve only shot one episode. And at that point, it’s like, “Oh, okay, so this is Sue Lynn. This is Sue Lynn’s office. All right.” In the pilot, for me, it had to be a quick discovery. So I’m looking forward to going through the stories and getting that place of comfort in her world. Because I’m not a power broker.

AX: Do you know what’s most important to Sue Lynn, or is that something that later scripts will reveal to you?

CARDINAL: Yes. Later scripts are going to. I have a sense of that, but how the stories are going to be told is to be discovered.

AX: Were you looking to do television at this time, or is STUMPTOWN something that just came up?

CARDINAL: I don’t set my goal as, “This is what I’m going to be doing.” It comes in front of me and I make those choices. Because I have to go along with where everybody else is, with everyone else’s development and involvement and preference and focus. I’m an actor, and so I have to go with what that vehicle is. And there’s some kind of a sorting thing, I think, that goes on. Like say, for example, the movies that are up for Oscars. There will be almost three movies that hit the same area to focus on, and I think that’s a huge element of what’s going on here, how Sue Lynn came to be at this particular time. She was written awhile ago, but obviously, there wasn’t a readiness for her to be on a mainstream television channel.

AX: Or Dex, for that matter.

AX: Because Dex is a somewhat unusual network female protagonist …

CARDINAL: Yes. When I was younger, I was just wishing for something like that. That’s what I wanted, some kind of role like that, to show the power of women, and the grittiness of women, and that survival instinct, and running your own show. Well, here it is, and Cobie’s doing that.

AX: How do you think Sue Lynn views Dex?

CARDINAL: She’s family. But I’d never say that to her. In my world, my son loved her, much to my dismay, to begin with. And so I think I feel like I’ve got a certain responsibility to her, because I think I added a little juice to her PTSD. And I respect her. I trust her. I got her to do that very sensitive job for me, so that means a lot. So whatever else happens, that’s a pin right there.

AX: Did you have to learn how to do anything, or about anything, in order to play Sue Lynn, like the workings of a casino, or …?

CARDINAL: We have a cultural consultant, Joely Proudfit, and she took me on a tour of a casino there on her res. They were really gracious hosts, they showed me so much, they showed me their surveillance and all kinds of stuff. So it really informed on the practical things of how that world works, what are things that people think happen but don’t really happen. Yeah, and I had to learn to knit. Sue Lynn knits.

AX: Is there any big difference in between working in the U.S. and working in Canada?

CARDINAL: Not to me. It’s all the same. You just enter a new bubble.

CARDINAL: Well, there are some things on the go, but nothing is nailed down yet. And I’m not really looking at anything, because STUMPTOWN is a big beast, and so I’ve got to know what schedules are. I’m going to be doing a little bit on a Jason Momoa movie, and creating a film acting school back home, in my home territory, Alberta.

CARDINAL: That it’s fun. That it’s unpredictable, it’s adventurous, and it’s hard-hitting in the ways things get done, and it’s surprising. The characters are full characters, they’re strong, and they interweave. Give it a chance. I think people are really going to enjoy it.