ARROW: David Ramsey on the Eighth and final season of the super hero series – Exclusive Interview

The actor talks about playing the hero Spartan 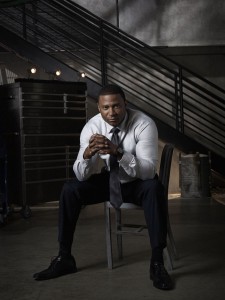 The CW’s ARROW is now in its eighth and final season on Tuesday nights. The series, which stars Stephen Amell as Oliver Queen, aka superhero the Green Arrow, launched the network’s franchise of DC Comics adaptations, executive produced by Greg Berlanti and Sarah Schechter. ARROW’s on-air DC Universe peers currently include THE FLASH, SUPERGIRL, LEGENDS OF TOMORROW, BLACK LIGHTNING and the new BATWOMAN.

Although the Green Arrow sometimes stands alone, he has a team. His best friend and confidante is John Diggle, who takes on the heroic persona Spartan, played by David Ramsey. Unlike many other characters in the ARROW-verse, former U.S. Army Special Forces operative Diggle was created specifically for the series, rather than derived from the comics (though the character has since been added to the DC ARROW comics). Diggle is married to Lyla (played by Audrey Marie Anderson). They had a young daughter, Sara – who suddenly became their son John Jr. when there was a change to the timeline caused by time travel on The Flash.

Ramsey, originally from Detroit, Michigan, has had arcs on series including BLUE BLOODS, THE DEFENDERS, OUTLAW, DEXTER, WILDFIRE, and GHOST WHISPERER. His feature credits include CON AIR, PAY IT FORWARD, and ILLICIT.

ASSIGNMENT X: When you began on ARROW, did you have a sense that John Diggle was going to get as big and as tough and as heroic as he became?

DAVID RAMSEY: No. I’ve got a funny story, though. The only thing that I was hoping for was a suit [laughs]. There were times during Seasons 1, 2, and 3 where you’d have Black Canary run in, Arrow run in, Red Arrow run in, Arsenal [all wearing superhero suits], and then Diggle comes in with a bomber jacket and jeans. So that was the hope, that at some point, this guy will come in with something. But no. Seriously, I could have never thought in my wildest dreams that this would be as big as it is.

AX: Once Spartan got his suit, how has it been doing suit work versus the bomber jacket and jeans?

RAMSEY: Well, first of all, when you take off the suit, it’s soup. You’re literally soup. You’re just pouring out of it. It’s all leather from top to bottom, a big plastic/metal helmet on the head. So it’s pretty hot.

AX: With the storytelling in the ARROW-verse, do you ever think, “Where am I? What universe am I in? What timeline is it? What’s changed in the timeline? What gender is my kid?”

RAMSEY: All the time. I mean, when we first take a look at the episode, we have to just remember what happened in the last episode to connect us to the beginning of this episode, and we’re always trying to figure how this connects to whatever probably happened in the large universe of FLASH, or LEGENDS [OF TOMORROW], where something changed, like my daughter to a son, things like that. So we’re always going through that in our minds. 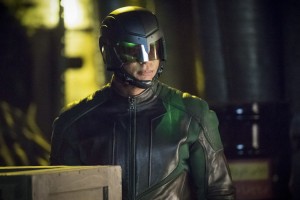 AX: If you found out that your personal timeline had flipped to change something like the identity of your child …

AX: For example. I think that’s one of the bigger things that’s happened to your character. Or your brother was good, and now he’s bad. Would you react the way John Diggle reacts, or do you feel like you’d react differently, but just play those scenes with conviction?

RAMSEY: Would I, David Ramsey, react [the way Diggle reacts]? I could only hope that I would. John Diggle is a lot better than I am. I think that’s part of the reason why he’s identified so well with the audience. You look at Felicity [played by Emily Bett Rickard]. She’s probably one of the top three smartest people on the planet. Oliver is one of the top two best fighters, maybe next to Bruce Wayne. And you have this guy, John Diggle, who’s just from the inner city, joined the military, bettered himself. I think that’s something that people really identify with. So I can only hope that I would respond to these other-worldly things as well as he has.

AX: Stephen Amell was part of the decision as to when ARROW was ending. Were you part of that decision?

RAMSEY: No, I wasn’t. To be totally honest with you, when I discovered that this was going to be a big hit, like in Season 2, 3, I’m like, “Yes, we can beat SMALLVILLE.” That was a selfish expectation of mine. So, no, I wasn’t part of it officially ending. I thought we probably would reach [Season] 10. But we’ve done seven strong seasons, now seven-and-a-half, eight seasons. We’ve done a great job. So I’m very proud of it. 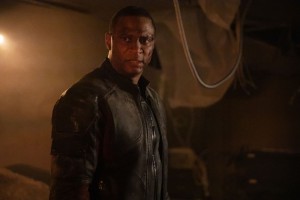 AX: How do you feel about the fan reaction to your character?

RAMSEY: This has been totally unexpected. I think [ARROW pilot director/executive producer] David Nutter is probably the only one that possibly could have seen it happening. All of us were just hoping we wouldn’t mess it up. And by the way, Diggle’s inclusion into the comic book universe on a larger scale is directly because of the audience. The public really responded to him. So I didn’t see that coming. This has been the highlight of my career, right? So I didn’t know this was going to happen. No one could have seen it. But I’m glad it did.

RAMSEY: I’ll be directing Episode 6 [scheduled to air Tuesday, November 26], and besides that, I’m concentrating on the finale. 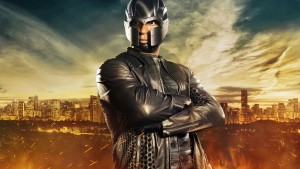 AX: And what would you most like people to know about ARROW overall?

RAMSEY: Well, Number One, that we are very fortunate to [have] the fans. This [success] is in no small part because the fans really identify with ARROW. And this ARROW-verse that existed, yes, it was well-written, I hope it was well-acted, but it was because people really latched on. So we are indebted to all the fans.

This interview was conducted during The CW’s portion of the Summer 2019 Television Critics Association press tour.