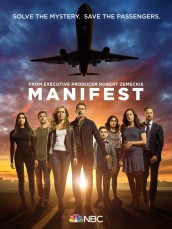 The executive producer discusses new discoveries on the NBC thriller 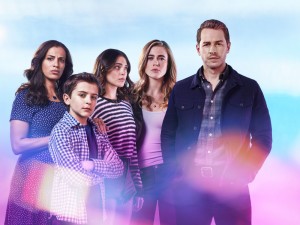 In MANIFEST now on Monday nights on NBC in its second season, the mysteries have deepened. In Season 1, Flight 828 between Jamaica and New York disappeared for five years – only to suddenly reappear, with the crew and passengers not knowing that any time had passed.

MANIFEST focuses primarily on the Stone family – Ben (Josh Dallas), his police detective sister Michaela (Melissa Roxburgh) and Ben’s young son Cal (Jack Messina), who were all passengers, and Ben’s wife Grace (Athena Karkanis) and their daughter, Cal’s twin Olive (Luna Blaise), who were on a different flight and spent the five years thinking the rest of the family had died.

The Stones, along with other passengers, civilians and some sinister government agents, are all trying to get to the bottom of what happened. Passengers on 828 have visions or premonitions, which they refer to as “callings,” of events that will occur. Cal, who has particularly strong callings, has had a vision that everyone on the flight will die in 2024, when they’ve been back as long as they were gone. Grace has started to have visions since she’s become pregnant with her husband’s child, and they’ve also found several people who weren’t on the flight who have had callings.

MANIFEST creator Jeff Rake, who also created THE $TREET and MISS MATCH and developed THE MYSTERIES OF LAURA, has announced that he has a six-year plan for the show. He answers some questions without giving everything away.

ASSIGNMENT X: You’ve come up with some twists that allow characters like Grace and Olive, who weren’t on Flight 828, to become more caught up in the story. Grace and Ben’s unborn child seems to have half-passenger status …

JEFF RAKE: I always knew that we’d have to take some extra pains to find ways to integrate the non-passengers into the story. The pregnancy storyline existed from the very beginning, and there were a couple of different ways we could go with that, and we just got very excited in the writers’ room when we started riffing on what that could mean if, through pregnancy, the callings, the DNA anomaly that Saanvi [a passenger who is also a doctor/researcher, played by Parveen Kaur] is investigating, could be passed along. And that got us off on a real tangent in the writers’ room, in a very positive way, and we kept coming back to it, and we realized that it was a story worth pursuing. And so that plays out, and it introduces, of course, new questions. Is Grace herself having the callings, or is this unborn child having the callings that happens to be gestating inside of her? And that gets answered by the end of the season. 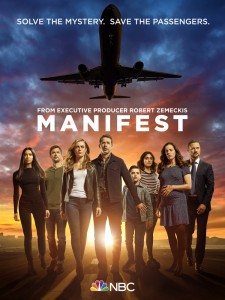 AX: It also answered the question of whether Ben was the father, since there had been the possibility that it might have been the man Grace was with while she believed Ben was dead …

AX: Now if Ben is the father, with Grace as the mother, does that mean the baby has an expiration date that’s twice as long as the passengers?

RAKE: I’m not going to answer that right now, but that’s a compelling question in Season 2. It’s the first concern that Grace has when it becomes clear that Ben is the father, and now they’re worried about the lifespan of this child. And of course, once you step away from this family, it also presents the question of, well, are there other unborn kids out there who are going to be suffering the same thing? Are there other ways that the DNA anomaly could be passed from person to person, and therefore, is there a potential epidemic of people with these depleting lifespans? And we’re going to follow that story.

AX: Olive has become friends with some people who are Believers, non-passengers who believe that the passengers are blessed in some way. Is Olive going to be exploited by these people?

RAKE: It depends on your definition of “exploit.” There are a couple dark characters brewing within that community of the Believers, and by the middle of the season, Olive and others are going to come to realize that there’s a grenade about to go off, and she shouldn’t be sure about who she can trust within that seemingly benevolent community.

RAKE: A lot of people have associated it with manifest destiny, just because we all know that phrase, and I think there’s a lot of confusion out in the world about what manifest destiny means. It sounds like a great, lofty ideal, and then you do a little homework, and you realize that this was, to your point, a doctrine of oppression and conquest. It’s not really an inspiration for the title. The inspiration for the title is really twofold. Not to go all Webster on you, but one of the dictionary definitions of “manifest” is about intentionality coming to the surface, what had been latent inside of you coming up to the surface and manifesting itself. And so for me, it was more thematic about the fact that the show is so much about overcoming obstacles, overcoming our past, and try to live a better present based on the past. And so, what had been latent inside of you becoming manifest, and then tying that to the fact that, in the aviation industry, the list of passengers is called a manifest. So that’s really the double entendre that I was going for.

AX: So it refers to a manifestation of something?

RAKE: That’s exactly right. It’s a manifestation of what’s best, or worst, inside of us. And as we get deeper in the series, we’re going to become more familiar with characters who we do not yet know in the series, who are perhaps using what’s going on for the worst, rather than for the better.

AX: Because you have six seasons mapped out, do you have any room for changing things because something popped, or something isn’t working?

RAKE: For sure. When I say I have a road map, those are the big moves from season to season that get us to where we ultimately need to get by the end of the series. So the mystery story is all worked out, but there’s a lot, obviously – every episode has lots of different mini-moves, left and right, relationship stories, and the science side of the show. Already, we have had many opportunities to build out a little arc, because an actor popped, or a story became more intriguing. Parveen Kaur, who plays Saanvi, our wonderful scientist, was cast as a guest star. And that arc was going to wrap up, and I found her so intriguing as a character, and the audience so quickly responded to her, that she quickly became integral to the show, and now she’s right there on the poster. And so, yes, the answer is, there’s every opportunity for us to contract or expand stories based on things that we discover, which is part of the joy of television storytelling.

RAKE: I don’t right now. Always, as a nervous television writer, there are a couple of ideas germinating in the back of your brain, but as long as I can ride this wave, I am all things MANIFEST.

AX: And what would you most like people to know about MANIFEST Season 2?

RAKE: There are a lot of new discoveries. And I know there’s often the concern of, “Are you just going to be dragging us along, but we’re not going to learn more?” You’re going to learn two really big things this season, one in the middle of the season, and one at the end of the season. And so if you stick with us every week, I’m certain you’ll be satisfied.