The actor discusses the new season of the FX series 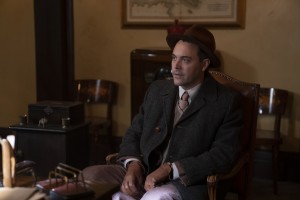 FARGO, now in its fourth season on FX Sunday nights, takes us to 1950s Kansas City, Missouri. In the series created and produced by Noah Hawley, rival gangs have a tense truce that local law enforcement probably can’t enforce.

Jack Huston place plays Odis Weff of the Kansas City police force, a man who is not adding to the stability of the situation.

At a Q&A panel for FARGO, Huston says he believes that FARGO is a special case. “It’s wonderful.  I think it’s so unique to itself as well, the FARGO world.  I’ve played quite a lot of Americans mainly, actually, but this feels completely different.”

Asked to describe Weff, Huston replies, “My character is pretty wacky.  He is suffering from severe OCD, in a time when excessive-compulsive order wasn’t diagnosed.  So, he’s battling a few soft demons, and being a veteran of the war.” This makes Weff a bit of a departure from the way law enforcement is usually depicted in FARGO. “As far as previous chapters of FARGO, the cop or the detective is normally a bit of the navigation of what’s going on and trying to find.” Huston says he finds Weff’s eccentricities “lovely. He seems maybe more integrated into the story.”

JACK HUSTON: I can’t really say anything. [Being careful of spoilers] is so hard. I think he’s fighting his own demons, but it’s also playing out very much I think with the OCD. One of the last professions you’d want to be in is, and something that perpetuates your condition, is being a cop. He thought it was going to be an easy tread. But instead, being a cop has proven a lot more difficult, and has exacerbated all of his [issues] and what’s going on with him.

HUSTON: I did a lot of research into OCD. That was a major one. But it’s interesting, because it’s FARGO as well, so when you think you’ve gone too far, you haven’t gone far enough. It’s a trip as an actor to do that, because you’re always trying to find the truth, and obviously, this is trying to find the truth, but it’s in a heightened world. So, we’re always trying to fight those impulses that make it a larger than life performance, or make it in any way big. It’s interesting [to be part of a project] where you’re given free rein to really get out there and do it.

AX: I’m guessing you did a fair amount of research into Weff being a war veteran …

HUSTON: Oh, absolutely. I did a lot of that for BOARDWALK EMPIRE [in which Huston’s character was a WWI veteran and military sniper]. So, I knew a lot about that. And my grandfather made a wonderful documentary, LET THERE BE LIGHT, which was about PTSD, after the Second World War. And it’s incredible, because literally, people were suffering afflictions where they couldn’t speak, it was before the government admitted that there was such a thing as Post-Traumatic Stress Disorder. And when my grandfather made that, they wouldn’t release it. They only released in in 1980, because [the government] said it was anti-war, and he said, “Listen, if I make a pro-war movie, I expect somebody to take me outside and shoot me.” There are no “pros” [positive aspects] to war. There are always going to be casualties, it’s always going to be horrific. So in a sense, this character follows a bit in the research I’ve done in the past for the two World Wars. This character is very much someone who has had the effects of that play havoc with his central nervous system as well. 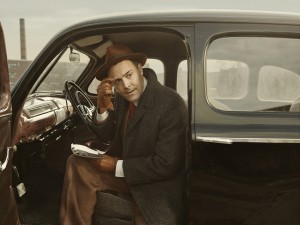 AX: Well, Jack Harrow in BOARDWALK was also suffering from PTSD, which just came out in a different way …

HUSTON: It’s funny. This is sort of as much of a character as I was doing in BOARDWALK. I normally like to choose things that take me out of my comfort zone and are quite character-y just in essence, but this is one of those ones where, like BOARDWALK, I’m hoping it’s that sort, when you can really transform into somebody else.

AX: Your family is full of actors and filmmakers. Did they encourage you to become an actor? Was it like, “Well, we’re all bakers, so here’s how you make dough”?

HUSTON: [laughs] They didn’t encourage it, but once one decided to become an actor, they have been very encouraging and helpful. They have very good advice – I was introduced to it from a very early age. But I grew up in England, the family has always been in America, so it’s been a very different journey. 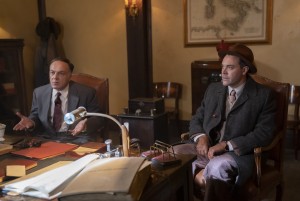 AX: So, are you in the U.S. now because the work is over here, or do you go back and forth a lot?

HUSTON: No, I live here. I have two kids and I live in Los Angeles. I have done for a long time – sixteen years.

AX: And what would you most like people to know about FARGO Season 4?

HUSTON: That it’s amazing [laughs]. I think if anything, it seems like the most ambitious, the grandest [season, because of], the period in itself, the palette, it’s such an incredible group of actors. And Noah is – one doesn’t use the word lightly – a genius. He’s brilliant.