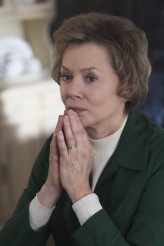 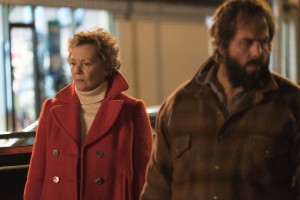 Actress Jean Smart can still be seen in reruns in her five-season stint as sweet Southern interior decorator Charlene Frazier Stillfield on the comedy DESIGNING WOMEN, won a Supporting Emmy for her work on SAMANTHA WHO?, earned another two Emmys for her guest work on FRASIER and was nominated twice more for her dramatic work on 24 as troubled U.S. First Lady Martha Logan.

Now Smart is playing a very different sort of character in Season 2 of FX Network’s FARGO, Mondays at 10. Criminal matriarch Floyd Gerhardt is perhaps the least glamorous role Smart has undertaken. “Hours and hours and hours of special effects people working on me,” she jokes during a Q&A session for FARGO during the most recent Television Critics Association press tour. “When I had an appointment to audition for [FARGO executive producer] Warren [Littlefield] and [FARGO series creator/executive producer] Noah [Hawley], they sent me a speech, a wonderful scene that I ultimately did with Mr. [Brad] Garrett [who plays Joe Lupo, a member of a rival criminal organization], one of my favorite scenes in the entire show. And it was such a brilliant speech, and it gave you absolutely every clue to the character coming from the time she was four years old and basically says, ‘Don’t make the mistake of looking at me and saying, “She’s just a woman,” because there’s nothing I haven’t seen. There’s nothing that phases me. There’s nothing you can do to scare me. I’ve seen it all.’ So it was a brilliantly, brilliantly written character.”’

Smart adds that she wasn’t frightened by the iconic FARGO accent, even though she’s not from the region where the show takes place. “I actually grew up in a Scandinavian community in Seattle. I fit right in. I’m not Scandinavian, but I look like I am. I didn’t know I was tall until I moved to New York. But the accent is not dissimilar. There’s Scandinavian influence and Canadian influence and everything, but everybody I grew up with said, ‘Uff da,’ and, ‘Yeah, sure, you betcha.’ So it was not a real difficult transition.”

AX: What made you decide to do Season 2 of FARGO?

JEAN SMART: It was [one specific] speech and everything that it said about the character and also just the fabulous fun and cachet of being on FARGO.

AX: Did you know what it would look like when it was completed?

SMART: No. When we saw [the season premiere at a screening], there were about six or seven of us in the cast, we were screaming, we were so ecstatic with the look of it and the soundtrack. Oh, my God. And the editing, and the sound editing. We were blown away.

AX: How do you feel about the way your character Floyd looks?

SMART: It was great fun to find Floyd’s look. When I saw it on the screen, it was horrifying. The first part was fun.

AX: Is it fun to play somebody who is literally fearless?

SMART: Oh, sure. Although you start to see the chinks in her armor as the series goes along and she is, at the end, a mother. But she’s a very practical person – she’s known a lot of loss and she knows she’s going to probably have more and she’s very practical. She’s had a hard life. It’s fun to play somebody who’s that strong-minded, absolutely. Because as a woman, you don’t get those roles very often. You usually get offered the annoying mother-in-law that everybody hates [laughs].