The actress talks her return to the scary anthology series 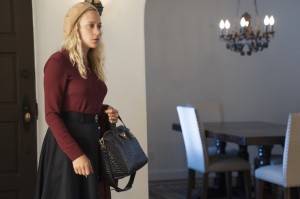 Sevigny, originally from Springfield, Massachusetts, won a Golden Globe for her work on the HBO series BIG LOVE, where she played sister-wife Nicolette Grant for five seasons. Sevigny was also nominated for an Oscar for her work in BOYS DON’T CRY. She’s also in the first season of the Netflix series BLOODLINE and can currently be seen in movie theatres in #HORROR.

CHLOE SEVIGNY: I’m not. My husband, Wes’ character, checks in [to the Hotel Cortez] because he’s investigating a crime that’s happening around there, and I think I go to visit him there and I think I might get a little stuck during my visit.

AX: Some of the actors have appeared as different characters in all five seasons of AMERICAN HORROR STORY. Did you not come back for Seasons 3 and 4 because you had scheduling conflicts?

SEVIGNY: It was more of an availability issue, yes, but I’m so thrilled to be back, and I think that what Ryan does is in the vein of so many great filmmakers from [Rainer Werner] Fassbender to Woody Allen to [Martin] Scorsese, using the same actors over and over again, and there’s such a trust, [and] the trust you then have, too, with all the production heads, from hair and makeup to wardrobe to set, it’s just like you know what you’re going into and you’re working with such a company.

AX: Can you talk about how coming back to the AMERICAN HORROR STORY company differs from coming back after hiatus to, say, another season of BIG LOVE?

AX: The last time you did a season of AMERICAN HORROR STORY, your character lost her legs. Are you going to have that kind of immense physical challenge this season?

SEVIGNY: Ryan has hinted at some sort of transformation. He hasn’t described to what extent it will be, but I’m hoping there’s no limb-severing. It was so difficult, because I couldn’t walk. I had to be wheeled around in a wheelchair, and it was four hours of prosthetics and all the rest, but it was awesome playing that character. I loved Shelley, she was so fun.

AX: When you have to deal with something like playing a character with no legs, does the scariest part of that become the practical issues of dealing with how to hide your actual legs? Has working on AMERICAN HORROR STORY changed your view at all of the nature of fear or what you’re afraid of?

SEVIGNY: You know, that’s interesting, because having watched all the seasons now, I find the first season of AMERICAN HORROR STORY the most terrifying. I grew up in a Catholic household, so I think that psychological fear of the ghosts and the crossing over thing to me really is the most terrifying. THE SHINING and spirits and that sort of thing is more terrifying to me than a serial killer or something like that.

AX: So the supernatural aspect is the scariest to you?

AX: Without getting too spoiler-y, does the supernatural play a large part in this season?

SEVIGNY: I think it does. As Ryan said, this hotel [refers] back to the first season [set in a haunted house] more, and also, we’re in a confined space.

AX: And after doing Season 2, would you ever want to play a paraplegic or quadriplegic again?

SEVIGNY: No, of course not. It depends on the character and what the character would be going through and the environment. I’d never say no to a good part.

AX: When you look at something like AMERICAN HORROR STORY, do you look at the totality of the project, or your part more?

SEVIGNY: I think with this, it’s more the totality. It depends from project to project. I think over my career, I’ve been more likely to look at the totality [laughs]. I like the filmmakers, the people involved, and the producers, and have played smaller parts, and now I’m trying to shift my career into meatier parts, meatier roles that I find more satisfying.

SEVIGNY: I have three films in the can. I did a film [LOVE AND FRIENDSHIP] with Whit Stillman, which is an adaptation of a Jane Austen novel with Kate Beckinsale, and I did an independent, kind of arty, weird horror-esque movie with my best friend, Natasha Lyonne in Canada called ANTIBIRTH, and then I just did another movie in upstate New York called LOOK AWAY with some young, exciting talent.

AX: And what would you most like people to know about AMERICAN HORROR STORY: HOTEL?

SEVIGNY: I think [for] whoever is a fan of the show, there’s the glamour aspect, the fashion, the sets, the makeup, it’s such a juicy, rich show to watch, and people will be really spooked and really surprised.

This interview was conducted during FX Networks’ portion of the most recent Television Critics Association press tour.