The actor talks playing Rabbi Milligan in the new season 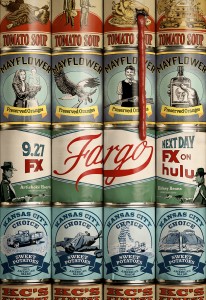 FARGO begins its fourth season on FX Sunday, September 27; it will be available the next day on FX on Hulu. The series, developed by writer/director/show runner Noah Hawley from the Coen Brothers film, is a crime anthology set in the Midwest, with linked stories that go from era to era. The season was originally set to premiere in April, but COVID-19 interrupted production.

Season 4 of FARGO is set in the ‘50s, when rival gangster groups swap the young sons of their leaders in a hostage bid that’s meant to foster harmony. This being FARGO, that seems unlikely.

Ben Whishaw plays Rabbi Milligan, an advisor to the gang leaders. Whishaw, originally from England, won both an Emmy and a Golden Globe for his performance as Norman Scott in the miniseries A VERY ENGLISH SCANDAL. Other notable work includes THE PERSONAL HISTORY OF DAVID COPPERFIELD, MARY POPPINS RETURNS, LONDON SPY, THE HOUR, and CLOUD ATLAS. Whishaw is also gadgetmeister Q in the Daniel Craig James Bond films, including the upcoming NO TIME TO DIE, and supplies the voice of CGI Paddington Bear in the PADDINGTON films.

At a party thrown by FX Networks for the Television Critics Association press tour (pre-COVID), Whishaw talks about FARGO, which is his first American television series.

ASSIGNMENT X: You often play a character who is somewhat eccentric. In FARGO, you’re one of a number of eccentric people. How is that?

BEN WHISHAW: Well, actually, if anything, I’m more the straighter person in this, and everyone else is quite [unusual]. I mean, he’s definitely eccentric in his own way, but some of the other characters are much larger. He’s quite a restrained character, withheld, which I’m enjoying playing. What was great was that you got the character’s back story acted out in the first twenty minutes of the first episode. That was really great and helpful.

AX: Did you do any research into either the ’50 period in America, or Irish Jews?

WHISHAW: He’s actually not a Jewish character at all. They just call him “Rabbi.” 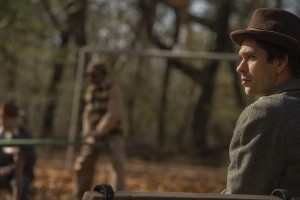 AX: Like in the police department, where sometimes the detectives and officers call their mentors “rabbi”?

WHISHAW: It’s not specified, but because the character was raised partly by a Jewish family, the name’s stuck with him. The Italians call him “rabbi.” But he’s not Jewish.

AX: But is he a source of information or advice for people?

WHISHAW: Yeah. It’s funny. We never really talked about why Noah gave him that name. I like leaving it open for people to think for themselves what it [means]. But I think that’s a good interpretation.

AX: This is your first American TV series. Is it different from doing a TV series in Britain?

WHISHAW: It’s just way bigger, more money, bigger production values, bigger in every conceivable way, really. We never do ten hours [episodes of a single season], really, in the U.K. The scale and scope is so much larger [in U.S. TV].

AX: Does it help in playing Rabbi Milligan that he doesn’t have the same background as the other characters?

WHISHAW: I think the character I play is kind of an outsider. He doesn’t fit in anywhere, so I could somehow relate to that feeling a little bit. I don’t feel like I’m playing an American, really. I feel like I’m playing someone who doesn’t have any place. But I’ve loved being in the world of FARGO, and the period, and that’s been wonderful. And I’ve loved filming here.

AX: Do you have a fun time bouncing back and forth between live action and voicing the CGI bear?

WHISHAW: Yeah, I love doing different things. That’s the biggest pleasure for me.

AX: Speaking of doing different things, you also do Shakespeare, both on stage and for film/TV …

WHISHAW: Yeah, quite a lot.

AX: You won a BAFTA for your portrayal of Richard II in THE HOLLOW CROWN’s production of that Shakespeare play. Is doing Shakespeare fun? When you play a Shakespearean character, do you worry about, “Countless other people have played this character since the 1500s?”

WHISHAW: Yeah, exactly. It’s got its own challenges and stresses. I think I feel a bit of the need to do another one, actually. It’s something obviously to do with the language, and the words, and the beauty of it. And the older I get, the more I’m moved by hearing it, Shakespeare. I find it very deep. 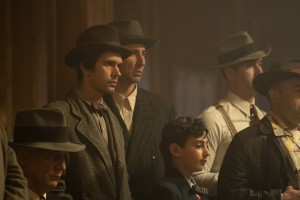 AX: Do you think part of that is that you know the text, even if it’s one that you don’t know word for word, so there’s that anticipation of, “Oh, I know I’m going to do this section that I love,” versus, “Here’s this script that’s brand-new, so I haven’t had time to love it yet.” Nobody’s going to compare you in the role, but you also don’t have an anticipation of it.

WHISHAW: Yes. I think that’s exactly right. But both are really interesting to do.

AX: Have you had to learn anything in order to play Rabbi Milligan?

WHISHAW: I feel like it’s been a big learning part. Because it’s so American, and it’s about America. That’s been a real learning [experience] – the things that drive Americans are different than the things that drive British people, and the values and the cultures, and subtle social things are so different. I think it is a lot about acquisition here [in the U.S.], and certainly, because we’re still so class-bound, there is that thing of embarrassment, of not getting above yourself – that’s a very big thing in England, Britain. It’s not a thing here, is it?

AX: Well, there’s a whole thing here of, “Who do you think you are to try to get our attention?”

WHISHAW: Right. But also, there’s something very deep in the culture of, if you don’t go and get it yourself, it’s not going to be given to you, you’re not going to just receive this. 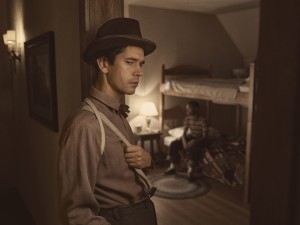 AX: There is a class system here, and race –

WHISHAW: Massive race, yeah, which is unbelievable. That’s another thing I feel like I’m still learning about, the way race works here.

AX: I know it’s an issue in England as well, but you don’t have the police literally shooting people.

WHISHAW: No – well, not to the extent.

AX: What would you most like people to know about FARGO?

WHISHAW: Just that I think it’s really fresh and exciting, and it has gone so far down the road [from the source material] that it’s its own thing. It’s really Noah now. It sort of left the film behind. This season, especially, is really brand-new territory. I’ve never seen anything quite like it. So I’m excited by that.