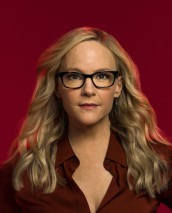 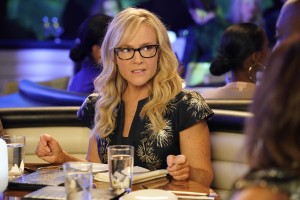 In Season 3 of LUCIFER, Monday nights on Fox Network, there are a lot of characters with exotic backgrounds. There is of course the title character (Tom Ellis), who is literally the Devil; his angel brother Amenadiel (DB Woodside); the demon Mazakeen (Lesley-Ann Brandt), formerly Lucifer’s minion and Amenadiel’s lover, now heartily annoyed at both of them; and lawyer Charlotte Richards (Tricia Helfer), whose body was inhabited for awhile (though no longer) by the goddess of all creation, aka Lucifer and Amenadiel’s mom.

Sorting through all of this is psychotherapist Linda Martin, played by Rachael Harris. Linda is a regular human, but she has Lucifer and Charlotte as clients and knows their full stories. She also knows that Amenadiel is an angel and that Maze is a demon. Linda and Amenadiel had an affair, which Linda ended in an effort to patch up her friendship with Maze. So far, this hasn’t gone very well.

Harris, originally from Ohio, has a wide-ranging resume. She had guest roles on STAR TREK: VOYAGER, SEAQUEST: 2032, and PUSHING DAISIES appeared in Christopher Guest’s mockumentary films BEST IN SHOW, FOR YOUR CONSIDERATION, and A MIGHTY WIND, and in the features THE SOLOIST and THE HANGOVER. She has also had arcs on RENO 911!, NOTES FROM THE UNDERBELLY, FUNNY OR DIE PRESENTS, NEW GIRL, and currently has a recurring role in SUITS.

ASSIGNMENT X: Now that Linda knows the big supernatural secrets about just about everybody, does she feel a little more relaxed, or is she still afraid of getting zapped, or does she feel like she could do her job better, or that she doesn’t want to analyze these people at all?

RACHAEL HARRIS: Well, I think she’s really rocked by everything, and is trying to do her best to act like a good therapist who knows how to handle everything, but even Linda needs someone to process that stuff with. So I think the reality of the enormity of what she knows is starting to weigh on her. Where at first I think it was very fascinating, and “Oh, my gosh, this is an interesting puzzle,” and then the more she realizes the fact that what she knows can actually end up killing her, I think that was a big deal. So she’s appropriately frazzled this season.

AX: Linda is worried about professional ethics. When LUCIFER the series started, Linda was dazzled into having sex with her client Lucifer, though she did break it off …

HARRIS: That’s weighing on her mind as well. And it’s ironic, because Tom Ellis and I were talking about – the other day, we were shooting a scene, and he said, “Hey, remember when we used to sleep together?” [laughs] And I said, “Yes.” And he goes, “That’s interesting.” Because that still plays in our minds a little bit, it’s tucked back in there. I think that will come back.

AX: Besides the sex with Lucifer, Linda had a full-on romance with Amenadiel. Is Linda angel-sexual, do you think? She seems to find both Lucifer and Amenadiel irresistible …

HARRIS: Exactly. Totally irresistible. I’m hoping that it’s just that she’s looking for people that are acutely honest. I guess that’s really not even fair, because Amenadiel hasn’t been completely honest with her. He lied to her [when they first met] and told her he was a psychotherapist. I think she really wants to find someone, and I think she really wants love in her life. Unfortunately, it’s like she’s picking alcoholics. She just keeps picking celestial people.

AX: She’s also got the quasi-ex-celestial Charlotte as a patient now …

HARRIS: Yeah, she does. Charlotte comes to see her, because she’s having difficulty coping, and it’s very hard for Linda. But they do end up spending a lot more time together. It’s really great. All I can say is, I’m really glad this season that I get to work with Tricia. It’s really been great to do stuff with her.

AX: So this season, you’re getting to work with just about everybody at some point.

HARRIS: Yeah. It’s pretty great. I can honestly say some of the best work Tricia has done on our show has been in my scenes with her.

AX: Have you been surprised at how much LUCIFER has explored all of the supporting characters?

HARRIS: Yes and no. But from the beginning, they had said they were going to. They needed us to trust them, because for them, it’s more fun as writers, and they had said, “Our intention is to open it up, so we can make the world bigger.” So it’s been refreshing and great how honest they’ve been.

AX: Now that Linda knows Lucifer is speaking literally when he talks about things like God and Hell, has her belief in metaphor been shaken?

HARRIS: Yes. Completely. Linda’s belief in metaphor has completely been shaken. Now, maybe if somebody comes in [as a patient] and thinks that they’re something, I think she may take it a little bit more seriously than she definitely did with Lucifer. But it’s so funny that I’m sitting in front of you and I say, “Imagine if you knew that there was an actual God.” Because everything about religion is faith-based. So if we knew there was an actual God, if we knew there was an actual Devil, how would that change the way we live our lives? It’s kind of that thing where – in my opinion – you don’t really know. And that’s what’s fun about our show, is that everybody reacts to it differently because of that.

AX: What would you say that Linda’s growth has been over the seasons?

HARRIS: Well, I think she’s been humbled, because I think a lot of it is what she thought she knew, and was so confident. I think her confidence is a bit shaken. So I think she’s grown in a way that she’s realized she’s going to really have to step up and take care of herself. She’s really been taking care of everyone and loving doing that, but I think it’s like any woman, any mother figure, that is constantly taking care of everyone around her. I think this season we’re going to see the growth of Linda, that she’s going to start to take care of herself a little bit more, and not be so accommodating. Does that make sense?

AX: Yeah. Do you think we’ll ever meet Linda’s therapist?

HARRIS: Possibly. I would love to have a Peter Bogdanovich/Lorraine Bracco moment [as on THE SOPRANOS]. That would be my dream. I would love to see Linda go into therapy, and for someone to treat her, the way she treated Lucifer and thinking she was insane. How is she going to convince someone unless they absolutely see it for themselves? It’s going to be dicey and interesting.

Have you now had the Comic-Con experience?

HARRIS: Oh, my God. Yes. I did. I have had the Comic-Con experience. This is the first Comic-Con that I’ve ever been to. It was really exciting to see how many fans we really have. Because it’s sort of like you don’t really know until you see them in a group together, and then they have such positive things to say, and they’re so passionate about the characters that it makes you feel really good. You feel like, “Oh, what I’m doing actually is registering with people.” I always say it’s like a Sally Field [winning her Oscar] moment, where you’re like, “Oh, my gosh, they like us,” or “They like me, they really, really like me.” So that was amazing, to see all that.

AX: And what would you most like people to know about Season 3 of LUCIFER?

HARRIS: We do have the addition of Tom Welling [as the Biblical Cain, aka Lieutenant Pierce] this season. He’s dreamy, and he’s a strong man. What I’m excited about with Season 3, really from a personal character point of view, is that we start to see Linda – she’s always been so controlled, and we start to see her go off the rails this season. What’s the thing that I most want people to know about the show? Just that there’s going to be even more in depth within the central characters, that we’re going to continue to mine that for more than just the procedural aspect of the show.