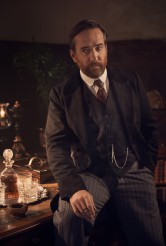 The actor talks the new miniseries based on the E.M. Forster novel 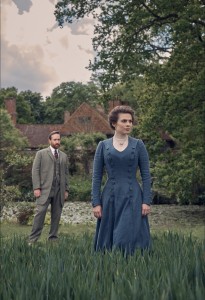 E.M. Forster’s novel HOWARDS END was adapted as a feature film in 1992, winning Oscars for lead actress Emma Thompson, the screenplay adaptation by Ruth Prawer Jhabvala and art direction. The story, set in 1910 England, deals with gender and class prejudices.

Macfadyen, originally from Norfolk, England, has prior experience in literary adaptations. He previously starred as Mr. Darcy in the 2005 film of PRIDE & PREJUDICE, as Arthur Clennam in the 2008 miniseries LITTLE DORRIT, Athos in the 2011 THE THREE MUSKETEERS and Philip in the 2010 miniseries THE PILLARS OF THE EARTH. He also played the Sheriff of Nottingham for director Ridley Scott in ROBIN HOOD and starred in the MI-5 and RIPPER STREET series.

ASSIGNMENT X: Had you seen the 1992 film version of HOWARDS END?

MATTHEW MACFADYEN: Oh, yes. At the cinema. When I was eighteen.

AX: When you became involved with the HOWARDS END miniseries, did you rewatch the film or avoid rewatching it?

MACFADYEN: You kind of can’t watch it. You can watch clips on YouTube, which I had a little look at, but it wasn’t [readily available]. I didn’t avoid it or go after it. It’s one of those things that’s just there. But ours is so different. Their format is so different that it’s not relevant, really.

AX: You’re a rather younger take on the character of Henry Wilcox than Anthony Hopkins in the movie.

MACFADYEN: I am, yeah.

AX: What does that do for the character? Is your Henry closer to his age in Forster’s book?

MACFADYEN: I don’t know, is the honest answer. I do know that when I met the makeup artist, we had an initial chat about it, and I said, “Do you want to do some aging?” And she went, “No, I think we’re okay.” So I was like, “Oh, okay.”

AX: Henry Wilcox is a fairly restrained person. Do you prefer parts where the character’s life is very interior, and he’s struggling to keep any emotion from showing, or do you prefer the roles where you’re allowed to be a little more outwardly expressive?

McFADYEN: If I did too much of one or the other – if it’s too bottled and buttoned-up, then I’m longing to be a bit sort of splurgy, and vice-versa.

AX: How is it playing opposite Hayley Atwell?

MACFADYEN: Lovely. Third time. We did PILLARS OF THE EARTH, and then we did ANY HUMAN HEART, which is a William Boyd adaptation of his own novel, so it was great. It’s nice to work with someone you know.

AX: How is it playing someone living in 1910? Is that a period you’ve worked in before?

MACFADYEN: I guess so, though I can’t remember what it was that I did, but you do a bit of research about the subjects, and it was lovely. I mean, it’s not that long ago. It doesn’t feel like stepping into too much of a different world, really.

AX: Is Henry angry about Margaret inheriting the estate of Howards End?

MACFADYEN: I don’t think he is angry about it.

AX: Does he feel that her inheritance makes her a better match for him?

MACFADYEN: I don’t know. It’s difficult to simplify in those terms. He’s in love with her, he loves her, and so it’s all sort of worked out, in a way. He’s lost his son and there’s been a fair amount of tragedy, but I think he’s found a sort of peace at the end. 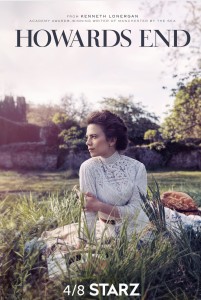 AX: Would you say that Henry changes his outlook, or simply develops an outlook, by the end?

MACFADYEN: I don’t know. I think maybe he has changed his outlook. They’re very big questions. I’m not sure. They’re sort of not playable, and I didn’t play [them]. I think he’s found a sort of peace, but [another character] talks about him to Helen, and she says, “He’s eternally tired.”

AX: Do you think that weariness come from Henry’s losses, or was he already weary?

MACFADYEN: That comes from everything, I think.

AX: You’re also in SUCCESSION, a new series on HBO with Brian Cox, set to premiere in June, that is about a family media empire. It sounds like your character in that might be a little more expressive.

MACFADYEN: Yes, exactly. So I’m looking forward. The man I’m playing is not buttoned up. He’s like an affable idiot, with a bit of a nasty streak – so far as I know. But then I don’t know very much about the part, because I haven’t seen the new scripts [beyond the pilot].

AX: Besides SUCCESSION, do you have any other projects going on we should know about?

MACFADYEN: I have a film coming out called THE CURRENT WAR, in which I play a small part, by J.P. Morgan. That’s a film about the AC/DC current wars. Ben Cumberbatch and Michael Shannon play Edison and Westinghouse, and I’m playing the daddy in THE NUTCRACKER. 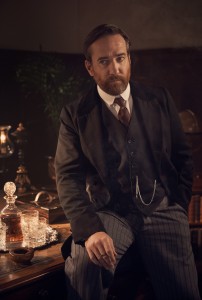 AX: Do you act opposite any CG effects in THE NUTCRACKER?

MACFADYEN: No. Mercifully, I’m in the real world before Clara goes into the realms of the Nutcracker.

AX: And what would you most like people to know about HOWARDS END?

MACFADYEN: I hope they enjoy it, and I don’t know, because I haven’t seen it, but I know that it was a beautiful, beautiful script, and it was a lovely thing to do, so fingers crossed.