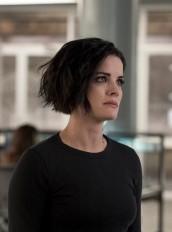 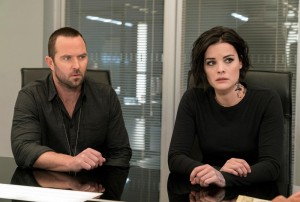 Greg Berlanti is known to fans of DC Comic TV series as one of the guiding forces behind The CW’s slate of superhero shows (ARROW, THE FLASH, SUPERGIRL, LEGENDS OF TOMORROW, and BLACK LIGHTNING, all announced as renewed for next season). He’s also an executive producer on the CW’s RIVERDALE (adapted from DC Comics’s ARCHIE) and on ABC’s new stage illusionist procedural DECEPTION and wrote and directed the just-released romantic comedy feature LOVE, SIMON.

However, some people don’t know that Berlanti is also one of the executive producers on BLINDSPOT, the NBC thriller now in its third season on Wednesday nights. Created by Martin Gero, BLINDSPOT begins when Jane Doe (Jaimie Alexander) is found in Times Square naked and amnesiac, with every portion of her skin covered in tattoos that are elaborate clues. With the help of FBI Special Agent Kurt Weller (Sullivan Stapleton), Jane rediscovers her true identity – as a heavily trained operative – and they are now involved in solving a new season-long mystery.

Speaking with a small group of reporters, Berlanti talks about BLINDSPOT and, more generally, about the art of working in television.

ASSIGNMENT X: As an executive producer with many projects going on simultaneously, what is your exact function on BLINDSPOT? Do the show runners just bring you scripts and say, “What do you think?”

GREG BERLANTI: On any show, it’s how much they need me that day. So some days they need me to help re-break an episode, or do a cut, or figure out a story arc, or cast an actor, and then other days, they’re like, “No, we’re all busy, we’re writing, we don’t need you today.” It changes from show to show, and day to day.

AX: Given the complex mythology of BLINDSPOT, where it seems like each element needs its own whiteboard of where its specific meaning will be going, is it harder to track interwoven plot threads on this, or how things move than on other shows with fewer moving parts? 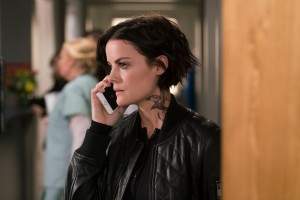 BERLANTI: I think it’s about the same. I think on all the shows that may balance mythology and individual episodes, it’s tricky, because you really want each character to have an arc, but within the show, and you want to have a mythology arc, and you want to deal with case of the week, so I find it’s actually really similar and just as challenging on each.

AX: Having done both, which do you feel is harder, writing a pilot or a series finale?

BERLANTI: I think a pilot, because there’s so much undiscovered, because it’s such a discovery process. Usually, most of the pilots we’ve written on the shows sometimes come in at like ninety-eight, a hundred pages when we start. We do them very rough, and we’re just discovering the world, and different things.

AX: What do you get out of BLINDSPOT that’s unique to BLINDSPOT?

BERLANTI: I would say with each of the different shows, it’s that group of characters, that group of writers. I love the puzzle element of it, I’ve always wanted to participate in a show that has that kind of mental cleverness to it, and I love that he’s got a team of writers that are really sort of assembling those things every week. I like that aspect of it.