© 2018 Fx
Matthew Rhys as Philip Jennings in THE AMERICANS
Interviews

The actor talks how the series wraps up nicely 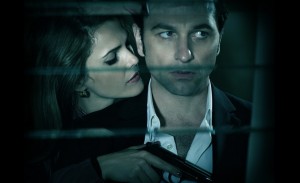 FX Networks’s THE AMERICANS is now in its sixth and final season on Wednesday nights. It’s now the mid-‘80s. Matthew Rhys’s character, the secretly Russian Philip Jennings, has stopped spying for the K.G.B. and is now really working as the travel agent he’s been pretending to be for years. However, since Philip’s wife Elizabeth (Keri Russell) is more devoted than ever to the Soviet cause and has recruited their daughter Paige (Holly Taylor), danger is still present in family life. Things become especially tense as Philip and Elizabeth find they disagree over what they think Russian policy should be going forward.

ASSIGNMENT X: Philip and Elizabeth are in conflict, but they’re not actually talking about it much yet …

MATTHEW RHYS: Yeah. It’s a kind of beautiful dramatic device, whereby you’re both in the same world, and one isn’t willing to talk about it, but one knows exactly what that world is. So exactly that. You have this wall, where one is trying to communicate through the wall, and the other is blocking it. So you have this ready-made conflict that’s been accepted for the past five years.

AX: Do you think that Philip wants to stay in America?

RHYS: Oh, yeah. I think that’s what he always wanted to do. I think that’s what he wanted to do when you met him in Season 1, Episode One, that he realized this life had a time limit on it, and more than anything, he wanted the safe future of his children, and I think if it was up to him, he would have taken a deal, secured their future and disappeared into Witness Protection.

AX: You have a Welsh accent in real life, but you use an American accent to play Philip. The U.K. also has had Russian spies – would you have preferred that the show be set in England so you could speak in your normal voice?

AX: So is part of Philip his accent?

RHYS: Well, yes, because he, like me, is putting on a fake American accent. I was a foreigner pretending to be an American. That’s exactly what Philip did, so in a way, it was easier for me. We [the cast and producers] spoke with Jack Varski, who was an East German recruited by the K.G.B. He came over here and he was trained in Moscow for about six years by a man from New Jersey, just to sound like someone from New Jersey. And bizarrely, there was a moment where I heard his accent shift, so you just went, “Oh, that wasn’t quite right.” And I went, “Wow, he’s been here forty years, and it can still unseat you.”

AX: Can you tease anything about the final season of THE AMERICANS?

RHYS: God, that’s a hard one. What’s great is, they really, truly don’t disappoint. Like the tenth episode, which we all just read, was everything you wanted it to be. And not in any clever or smart compartmentalization, they wrap everything up very, very beautifully.

AX: Were you excited to finally get to do some scenes with Costa Ronin, who plays former K.G.B. agent Oleg Burov? He’s been on THE AMERICANS as long as you have, but you haven’t gotten to work together until now.

RHYS: Yeah. We’ve all been kept from the Russians, so it was great to do this entirely new dynamic element, that I’d never done in five years of the show.

AX: Are there other actors that you wish you would have gotten to work with more? 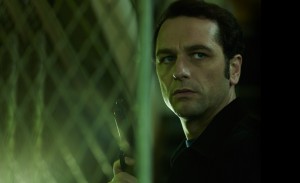 Matthew Rhys as Philip Jennings in THE AMERICANS | © 2018 Fx

AX: Philip is involved in a certain amount of violence. Was there anything you learned from the violent scenes, even in terms of, “Well, this will be handy if I get another role with stunts”?

RHYS: Yes. You always hope that any element of a new part or character will open up something else for you, so you hope that there’s one element that you can show that you’re capable of doing, or at least give the illusion of capability.

AX: You were also a regular on BROTHERS & SISTERS, which was also a critically acclaimed show. It seems like THE AMERICANS may have increased your visibility as an actor. Do you see a difference in the kind of work that you’re being offered now?

RHYS: Yes, absolutely. It was a first moment for me to step into a leading role, so that was equal parts terrifying and exciting, and for a brief moment, there’s a small reward to be reaped, so I’ll keep reaping.

AX: You played the real person Daniel Ellsberg, who revealed U.S. military secrets to the press in the hopes of ending U.S. involvement in Vietnam, in last year’s Oscar nominee THE POST. Did you have any reflections on doing THE AMERICANS while you were doing THE POST?

RHYS: Sometimes. I saw similarities between Ellsberg and Philip, in that they’re both conflicted men who had a true moral compass and wanted to do something about it, and did. And they were patriots.

AX: What are you going to miss most about THE AMERICANS?

RHYS: I’ve never been on a show where the layering of what you’re playing is so intense and so varied and rich and dense and complicated. I’ve never had to juggle five things in one scene as much as this show, so I’ll miss the challenge of that.

AX: And what would you most like people to know about Season 6?

RHYS: That it doesn’t disappoint. I’m sorry to be so generic.

TCA 2011: Could HOUSE and BONES not be renewed for next season?
CD Review: THE X-FILES: VOLUME ONE soundtrack (3,000 limited edition)
TV Review: GLEE - Season 3 - “On My Way”
ALEX RIDER: Author and executive producer Anthony Horowitz on Season 2...