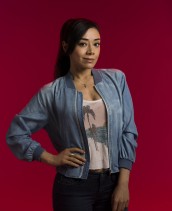 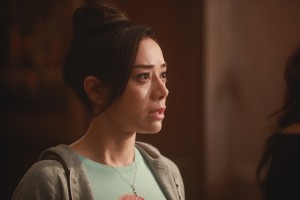 Fox Network’s LUCIFER is now in its third season on Monday nights. Tom Ellis plays Lucifer Morningstar, the actual Devil, who has left Hell to become a nightclub owner/police consultant in Los Angeles. Lucifer has just found out that Lieutenant Marcus Pierce (Tom Welling), the new head of the police precinct where Lucifer consults, is actually the Biblical Cain.

Aimee Garcia plays police forensic pathologist Ella Lopez, who has a crush on Pierce and a soft spot for Lucifer, as well as almost everyone else she knows. Like most of the other characters, she thinks Lucifer is eccentric and speaking in metaphors when he talks about himself, rather than realizing he’s an actual fallen angel.

Garcia knows her way around crime thrillers, having spent several seasons on DEXTER. The Chicago-born actress has also been a regular on GREETINGS FROM TUCSON, ALL ABOUT THE ANDERSONS, GEORGE LOPEZ, TRAUMA, VEGAS and RUSH HOUR; her film credits include D.E.B.S. and the remake of ROBOCOP.

At a party thrown by Fox for the Television Critics Association press tour, Garcia talks about all things Ella.

ASSIGNMENT X: Is Ella’s heart going to be broken if she finds out the truth about Marcus Pierce being Cain?

AIMEE GARCIA: Ella is the most nonjudgmental character I think I’ve ever played, and probably have ever seen. So I love that even if she did find out that Pierce is Cain, she probably would just hug him first, and then follow it up with a bunch of questions, and ask why. I feel like she really gives people the benefit of the doubt. As far as who she is as a person, I love that she’s positive and optimistic and loving, which I think that we really need in this world right now.

AX: When you started playing Ella, did you have to learn anything? DEXTER was a show with a lot of body parts, but your character on that wasn’t really dealing with that aspect of things.

GARCIA: Yeah. I definitely want to know everything I’m saying, so I definitely look all that up. I had to how to not contaminate anything, how to use gloves at all times, how to not disrupt any crime scenes, where to walk, where not to walk, how much equipment you are carrying at all times, how a watch should be worn because you have to determine time of death, and when to use tweezers, when to not use tweezers, the importance of taking pictures, the importance of using flash. So yes, I had to learn all of that stuff.

AX: There was a Las Vegas episode earlier this season where Ella and Lucifer go undercover as nightclub performers and you got to dress up in a way that Ella doesn’t very often, plus you got to sing and dance. Did you enjoy that?

GARCIA: Yes. Tom and I were in heaven. We are kids in a candy store when it comes to singing and dancing, and we just had a blast. It’s been so fun to have a playmate like Tom Ellis, who is equally excited about singing and dancing as I am.

AX: Is that part of your background? Do you come out of musical theatre?

GARCIA: Yes. I started as a dancer, and I sing here and there, but yeah, I’m a total musical theatre nerd.

AX: How long did that LUCIFER musical number take to rehearse?

GARCIA: It took a couple days. So Tom and I learned pretty quickly, we met with the backup dancers, and we had I think just a couple of days of rehearsal. But he’s a complete quick study, which is really fun, and he’s such a charmer. He’s very comfortable in the spotlight, so charm was just oozing out of him during that whole routine, and we were surrounded by professional dancers, and we were like giggling schoolgirls.

AX: They tend to pair people up in interesting different ways on LUCIFER. Besides getting to sing and dance with Tom Ellis, do you have favorite pairing scenes?

GARCIA: Yes. I actually have a really fun pairing scene with Lesley-Anne [Brandt, who plays the demon Maze] coming up in an episode called “My Brother’s Keeper,” and I also pair up with Trixie [Scarlett Estevez plays the young daughter of Lucifer’s detective partner Chloe] in that episode. Everyone’s been calling Ella an older Trixie, and they’re finally in the scene together for the first time.

AX: Are we going to see any more of Ella’s background?

GARCIA: Yes. We meet another one of her brothers in an upcoming episode, and hopefully we’ll get to meet her abuelita very soon, and learn a little bit more about why she hears voices in her head and what’s that all about.

AX: How do you think Ella would react to finding out the truth about Lucifer?

GARCIA: Ella has kind of a sixth sense. She’s able to see people’s auras, like when Charlotte [played by Tricia Helfer] came back from the dead, came back from Hell, Ella was able to sense a darkness. When Charlotte was the goddess, Ella was able to see the light coming out of her. So she has a really good sixth sense and is able to see auras. And I think it’s really important to who she is. And I think that she’s grown very fond of Lucifer, and I think if she ever found out that he was the Devil, the first thought that would come into her head is, “You’re a fallen angel.” And she would look at him from that perspective. And give him a hug, of course. Because she still thinks he’s an unemployed actor who just needs a hug. And to get an audition go well, to get a job.

GARCIA: I do. I have a Mexican superhero movie called EL CHICANO, produced by Lorenzo di Bonaventura and directed by Ben Bray and produced by Joe Carnahan. That’s going to come out later this year, and I’m really excited, because it’s nice to see the Mexican community with the backdrop of a superhero story.

GARCIA: I play Vanessa, who is the female lead. She’s the love interest to the actual superhero. And she comes from Boyle Heights, but she goes away to get her education degree, and her teacher’s degree, and ends up coming back and teaching in the community where she grew up. So she’s a super-strong woman, she’s badass, she’s no bulls*** and she’s got a huge heart. And she’s kind of like the rock and the heart of the movie.

AX: Are you drawn to characters who have strong centers, or is that just how you’re cast?

GARCIA: That’s a good question. I don’t know. I definitely love representing women who have a very strong North Star, and know who they are, because I think that it’s important to see women who are comfortable in their skins, and I’m happy to represent that.

GARCIA: That you never know what to expect, except beautiful people and episodes that really kind of tug at your heartstrings, might make you shed a tear, but also make you think.