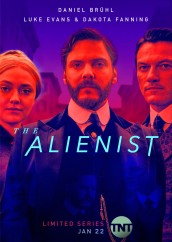 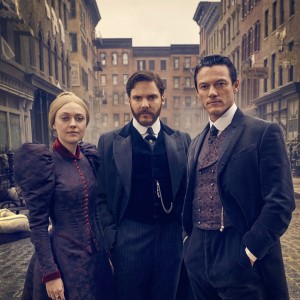 Rosalie Swedlin, one of THE ALIENIST’s executive producers, talks about how the project came together.

ASSIGNMENT X: How did you find your director, Jakob Verbruggen, for THE ALIENIST?  Had you worked with him before?

ROSALIE SWEDLIN: Well, when [executive producer] Cary Fukunaga [who was originally set to direct] no longer was available to us, all of us were huge fans of the work that Jakob Verbruggen did on THE FALL and LONDON SPY. I can’t remember if we called his agent, or the agent called us, and the timing was just perfect, because Jakob was coming over to the States. He hoped to take a vacation, driving up the Pacific Coast. We said, “No, no, no, he’s got to come in and see us.” We got him the scripts we had available at the time. He had such a wonderful sense of the material, and his visual style and aesthetic is perfect, so yeah, it was a love-fest.

AX: Was it deliberate that you cast all three leads with actors who are normally known for their film work, or did it just work out that way?

SWEDLIN: We wanted the best actors possible, and Jakob was very involved in the casting, and we had one of the best casting directors, Avy Kaufman, working with us, and the Paramount casting people. But the lines have blurred completely between film and television work, and so it was just a question of, who would be the best actors to fulfill those roles.

AX: Were you casting at all with a sense toward people who could be acceptable to a contemporary audience, but also had sort of a period sensibility to them?

SWEDLIN: Yeah. I think they had to be credible, obviously, when dressed in period costumes, but we wanted actors who weren’t so urban and modern that they couldn’t themselves step into those roles.

AX: Obviously, the subject matter of THE ALIENIST is very intense and visceral. How much of that do we see in terms of what is presented on screen of the murder sites?

SWEDLIN: I think the series has a great deal of intensity, because we’re witnessing the exploitation of children in different forms. And as far as how much you see, this is basic cable, and so there are certain parameters which we observe. But we were incredibly careful in the way the children [actors] and their parents were brought into the series and things were explained, and if you observe very closely, where the children are concerned, it’s always tastefully done within the parameters of what the show is about. [In the story], it’s children whose parents often are selling them into prostitution. It’s rough, but it was true to the period.

AX: In terms of the gore of the crime scenes, do we see it, or is it just in the dialogue?

SWEDLIN: You’ll judge for yourself.

AX: Who are your writers?

SWEDLIN: Hossein Amini was our first writer, and he created a bible for the series. And then in the same way we looked for our actors, when we approached casting our writers, we wanted the best writers, and a mix of writers. So there were some writers who knew the book, and were dying to work on the show, but the four original writers were Hoss, E. Max Frye, who had done everything from SOMETHING WILD to working on FOXCATCHER, which he had just done before he came onto THE ALIENIST, John Sayles, who’s done everything and also is a huge Teddy Roosevelt aficionado, and then Gina Gionfriddo, a wonderful New York playwright who also worked on BOARDWALK EMPIRE. So she had done some period drama, too.

AX: Did Jakob Verbruggen direct all of the episodes, or he’s the director/producer?

SWEDLIN: He directed the first three episodes, and set the style for the show, and then a gentleman named Jamie Payne was our producing director, and part of his job, in addition to directing the final two episodes, was to educate each new director who came in, in what was the aesthetic for the show, and the way Jakob was shooting, so that there is a continuity, although we have different directors. We’re very eclectic internationally. Jakob is Belgian, we have a Spanish director, Paco Cabezas, Jamie Payne and James Hawes are British, and David Petrarca is an American director.

SWEDLIN: I have some, but some are in earlier stages of gestation. I have a film coming out from Sony Classics in I think June or July of this year starring Glenn Close and Jonathan Pryce called THE WIFE, written by Emmy Award-winning writer Jane Anderson, who wrote OLIVE KITTRIDGE, so that’s in the can and will come out this year.

AX: What would be your hope for these ten episodes of THE ALIENIST, that people feel this is a complete entity unto itself, or that they go, “Oh, we’d like to know more”?

SWEDLIN: Both. It is an entity unto itself. This is THE ALIENIST, start to finish. Caleb did write other books and there’s also the possibility of, if an audience loves the show and loves the characters as much as we did, I think we would all love to think about another show, but it’s very much a limited series. That’s how we conceived it, and that’s how I hope it will be appreciated.

AX: And what would you most like people to know about THE ALIENIST?

SWEDLIN: That it’s a wonderfully satisfying and relevant piece of drama.

This interview was conducted during TNT’s portion of the Winter 2018 Television Critics Association (TCA) press tour.