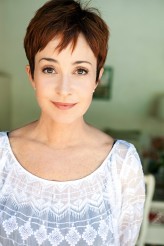 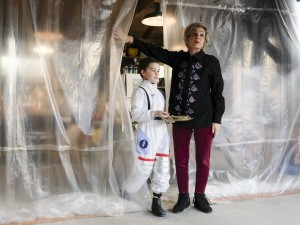 CBS’s Thursday-night comedy YOUNG SHELDON is the ratings-hit spinoff of THE BIG BANG THEORY, now in its eleventh year. YOUNG SHELDON was created by Chuck Lorre, who also co-created BIG BANG, and Steve Molaro. YOUNG SHELDON chronicles the childhood adventures of BIG BANG THEORY’s scientifically brilliant but socially inept Sheldon Cooper, played on that series by Jim Parsons, who narrates and is one of the executive producers on YOUNG SHELDON. Iain Armitage plays the title role on YOUNG SHELDON, which is set in the ‘80s. We meet younger versions of Sheldon’s mother (Zoe Perry), sister (Raegan Revord) and brother (Montana Jordan), as well as Sheldon’s father (Lance Barber).

Additionally, we get to know Sheldon’s grandmother, Meemaw, who is played by Annie Potts. Meemaw says the kind of outrageous things that come naturally to Sheldon, suggesting his grandparent has been a strong influence on him.

Potts, a native of Tennessee, was one of the leads for seven seasons of the influential comedy DESIGNING WOMEN. Potts was also a regular on LOVE & WAR, DANGEROUS MINDS and ANY DAY NOW. Her film career includes the original GHOSTBUSTERS, GHOSTBUSTERS II, PRETTY IN PINK and the cult car comedy/romance CORVETTE SUMMER opposite Mark Hamill. Potts also does a lot of theatre work, including a recent acclaimed production of THE MIKADO.

During a set visit on the front porch of Sheldon’s childhood home, Potts talks about why she thinks this is a great moment for a character like Meemaw, and more.

ASSIGNMENT X: When YOUNG SHELDON started, obviously Chuck Lorre as a creator/producer and THE BIG BANG THEORY as a series both have great track records, but given how weird the business is, did you have a sense of, “This will do well,” or were you just like, “Oh, thank God” when it did?

ANNIE POTTS: Well, just statistically, it looked good. But you never know anymore. Sometimes you think it has all the earmarks of something that ought to be a success, and it won’t fly for whatever reason. But I think – once I met the kids, it was like, “Oh, yeah.” How incredible – that child [Armitage]. Not only are the cast beautifully matched to their characters, but as you can see, the kids are really great, and the grown-ups are lovely, too. So it makes for a very sweet atmosphere work-wise, and then you have Chuck and Steve. We were a little late coming in [for the set visit] today, because we’ve been apart for two months and we were all so happy to see each other. It was like, “No, no, I don’t want to work, I just want to be with them” [laughs].

AX: Had you been looking for another TV role before this came along?

POTTS: I always felt that I had one more shot at the rodeo. But I was having a hard time finding my horse. But I feel like I’ve got a very good horse now.

AX: Meemaw sort of does what the adult Sheldon does on BIG BANG, saying things that should be awful but are somehow hilarious. Is there a rhythm to playing that dialogue, so that the audience doesn’t go, “Uh …”?

POTTS: [The writers] have an infallible comic rhythm, which is personal to each character. There’s a larger arc of a basic comedic rhythm, and then there’s a character’s comedic rhythm. And that’s all integrated for them. I was being a Southerner, born Southerner, because they’re not known for Southern characters before, and I thought, “Oh, I wonder if they’re going to have that rhythm right.” Silly me. You bet.

AX: This is the first half-hour comedy you’ve done in awhile …

AX: What’s it like to be in this format again, even if it’s single camera, as opposed to multi-camera?

POTTS: I love the single camera, because I do theatre as well, and I love that. I started in theatre and I feel very at home doing that. The half-hour live audience shows are such a hybrid. It’s like, “Okay, do I play this for the camera, or do I play this for the audience?” It’s a tricky thing, and you’ve all been to those tapings – it’s a bit of a circus. I have to say that I prefer to work in a single-camera thing, although sometimes it’s a little more difficult to find your rhythm, just because the [multi-camera live] audience will help you along with it if you’re missing something. But again, we have these guys [the writers], and they both have an absolutely infallible, golden ear, so you can never really go wrong. If you go wrong, they’re going to hear it, and they’re going to correct it.

AX: How much of Meemaw is what you bring to her, or was she pretty much on the page when you got it?

POTTS: They write so well for me. They had this thing in their heads, and I think I was a good bit of casting. Usually, when I get on a new project, I have a lot of ideas, and if they’ll hear me, I’ll go in and I’ll say, “I was thinking maybe this or that.” I can be completely lazy here, because they do all that. I’ve got no questions. It’s like, “How do you want me to do it? If I’m not saying it right, tell me, and I’m happy to do it.”

AX: Had you gotten to work with Chuck Lorre before?

POTTS: I did one episode of TWO AND A HALF MEN ten years ago, but just one outing. They wrote a wonderful character for me then. So they’re pretty great. I have been so blessed in my career with just the most astonishing writers, and I can hardly believe my luck.

AX: How is it working with so many young costars?

POTTS: They’re pretty smart. They’re really in the moment, the kids. Hey, it’s all good. These days, for a woman to be working in this field at sixty-five, I feel like I landed in the honey pot. [The character] is fabulous.

POTTS: No. I did talk to one of my sisters, and I said, “Isn’t that just like Mama?” And we had an argument. She said, “No, that’s like So-and-So.” So all of these qualities that Meemaw has, I have known these Southern women for a long time, and I love them, they’re fabulous.

AX: Is there a difference between Tennessee, where you’re from, and Texas, where Meemaw is, in terms of the women and the approach to family?

POTTS: It’s pretty similar. There is a Southern thing. It’s hard to articulate. Those women, they have a certain walk and they have a certain sassiness and – I can’t articulate it. I just can’t do it. Part of them, they just don’t give a bleep. They are uncensored. And Meemaw’s almost like a child in the way she’s so uncensored. It’s like, “Oh, my God.” People say all the time to me now, “The things she says!” Isn’t it fabulous? I do think that that’s something that happens with maturity, with Southern women. At first they want to please everybody, and then by sixty, they just don’t give a s***. It’s like, “Let me tell you what I think, okay? Here it is and I don’t care if you like it or not. I don’t care if you like me or not.”

POTTS: Pretty much. [laughs] I think it’s a lot less time in therapy there. It’s like everybody knows where they stand.

AX: Are you accentuating your Southernness at all to play Meemaw?

POTTS: Yes, well, I’m a bit of a hybrid Southern woman. But I have to say, I’m more and more like her as time goes on [laughs]. And I think she is hitting a nerve with the audience and people love her, so that makes me really happy.

AX: We found out in a recent episode that Meemaw used to buy her marijuana wherever. What other things are in her past that we don’t know about? Was she a flower child?

POTTS: Well, clearly, she was smoking some pot [laughs]. I think that’s what some people forget about the people around my age. They’re like, “My God, were you a hippie?” It’s like, “Probably. Most people were in the ‘70s.” But they have alluded to that. I don’t know. Honestly, it’s like Christmas Day every time I open a script. They’re so good, it’s like there’s always a bouquet of flowers for Meemaw in there. Really, they just hide little gifts for us every week. It’s like, “Oh, I see.” But I ask no questions. I just wait for the next gift to be delivered to my door. It’s quite a sensational gift to have, too.

AX: We’ve also seen that Meemaw can be quite formidable …

POTTS: I think given the times, #MeToo and all that, here’s a woman who is like, “You know what? I’m not taking any s*** from anybody anymore.” And I get the impression with Meemaw that she never has. So I think that all women, of every age, want to see and hear more about that. This is the Year of the Woman, and I think Meemaw can lead the charge for the sixty-year-olds. We’re having quite a moment.