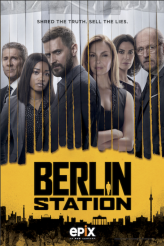 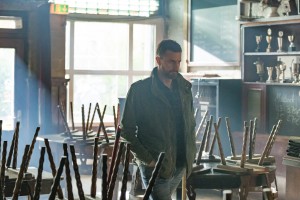 By the end of the first season of Epix’s crackling espionage drama BERLIN STATION, the C.I.A. office of the title was in chaos. Top spy Daniel Miller (Richard Armitage) had been shot and badly wounded, station chief Steven Frost (Richard Jenkins) had been jailed (though later released) and fired, and operative Hector DeJean (Rhys Ifans) turned out to be leaking information to the press and was on the run.

At the start of BERLIN STATION’s second season, beginning Sunday, October 15, one of the big questions would seem to be how all of those characters can find their ways back into the story. Executive producer Bradford Winters, who bears a striking resemblance to his actor brother Dean Winters, debriefs us on the characters, and much more.

ASSIGNMENT X: Was the BERLIN STATION Season 1 finale written with the expectation that there would be a Season 2, or did you find that you had to write yourselves out of any corners?

BRADFORD WINTERS: It was made in the hopes that things would go on, but at the same time, I think we gave Season 1 a kind of an ending where if it had gone that way [and been the end of the series], and thankfully it didn’t, it would have felt like a satisfying close. So we tried to end Season 1 in a way that would give it that sense of closure, but also keep the door open for a season to come. 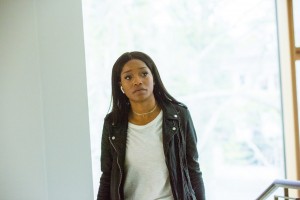 AX: How are you bringing back characters who are no longer with the station, some of whom seem to be in hiding, and yet need to be in reach of the station if they’re going to be in the show at all?

WINTERS: Well, that very question was what was sort of our own leading questions. I mean, I can’t give away details, but we have worked hard to make everything fold naturally into the season, even against odds of, “Where’s this person and can that person be working in the station anymore?” Things like that. We are bringing people back, and it was difficult, but that was also the exciting challenge of it, how to disrupt BERLIN STATION at the end of Season 1, do some dismantling of the ranks, and then how do we pick up the pieces, pick up where we left off at the start of Season 2, and continue to move forward with an ensemble.

So I think there will be some fun surprises as to how that gets pulled off, but also, it is the show that it was, and the station that it was. It’s really a matter of picking up those pieces, and the idea behind the second season in some ways is the station taking power into its own hands, having been the subject of forces beyond its control [in Season 1]. So there is very much a flipping of the tables M.O. creatively in this season.

AX: What is the rundown this year behind the scenes at BERLIN STATION? Series creator Olen Steinhauer was very involved in Season 1. Is he back again this year?

WINTERS: I was show runner Season 1, and now on Season 2 again. So I’ve been the show runner both seasons. Olen created the show and was with us on the writing staff for Season 1, but has been busy working on a novel this season.

WINTERS: Ashley Judd plays B.B. Yates, who’s the new chief of station, replacing Steven Frost. She is somebody who has experience at different stations, and she’s preceded by the nickname of the Station Whisperer, meaning she has been dispatched to stations like Berlin that are in various states of disrepair, or moral or institutional brokenness, and she comes in to help get that back on their feet. But what we learn about B.B. early on is that, at the same time, she plays a bit of a maverick role and is not simply a company yes woman, there to do the bidding of Langley [C.I.A.’s headquarters in Virginia]. She’s there as much to empower the station itself.

AX: Was Ashley Judd a fan of BERLIN STATION, or did you reach out to her based on her TED talk, or …?

WINTERS: Her name came into the mix, and we reached out to her, and apparently she had really enjoyed the first season and was very keen on the first two scripts for the second season, and embraced the role of B.B. Yates, and it really spoke to her and appealed to her, and off we went.

AX: You’ve also added Keke Palmer this season as April Lewis. Is April an agent or an asset?

WINTERS: Well, those are slippery terms. Actually, “agent” and “asset” are both the same term, meaning somebody, a civilian, who is functioning as an adjunct source of intelligence to the C.I.A. So our spies are spies or case officers. April is a case officer and a spy. So the assets are the non-C.I.A. people outside of Berlin station, who are feeding intelligence and information to the C.I.A. 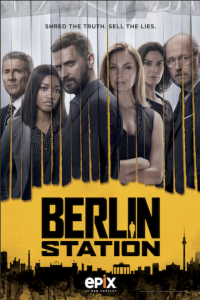 AX: When you were conceiving the basics of the B.B. Yates and April Lewis characters, were you thinking they should be women?

AX: Just to balance out the gender in the cast?

WINTERS: Yeah, to balance out the gender, and to do something different. In the wake of the fall of Steven Frost in Season 1, we just knew instinctually that our new chief of station for Season 2 should be a woman, and that was sort of an immediate idea. And then bringing in some younger blood in the form of Keke Palmer playing April Lewis, similarly, we knew at the bottom of the ranks it would also be good to bring in a female character, so at the top and the bottom to balance things out and mix it up.

AX: Can you tease any other major cast members who are new to the season?

WINTERS: We started out thinking that maybe there would be another additional character or two. I mean, of course there’s John Doman, who’s playing our ambassador – I would be remiss to not mention John Doman, who we’re so excited to have. But that’s it. It’s already a substantially-sized ensemble, and we’ve made it even a bit bigger.

AX: Are you shooting on location in Berlin again this year?

AX: And are you shooting anywhere else?

WINTERS: Yes. We have some exciting location shoots this season. We’ve been elsewhere in Europe and outside of Europe. I don’t know if I’m allowed to reveal those or not, but we do take it outside in Berlin.

AX: Since the creation of Season 1, the real world has changed in ways that no sane person could have anticipated. In Season 1, we didn’t see the C.I. A. station have that much direct interaction with the mainstream American government. Does that continue, or are there any references to Washington, D.C. now?

WINTERS: The administration is a presence this season, just because of the shift in the political landscape in the real world between the two seasons. So we have an ambassador character, when we didn’t in Season 1. We deal with it, because it’s a reality, and it is something the C.I.A. does have to deal with, and we all know lots of the drama that has gone down between the administration and the C.I.A. since January of 2017. So it’s there. It’s not front and center in this show, but it’s there. And in certain moments, it does become front and center, and then it recedes.

AX: Was there a discussion amongst the creative staff as to “how much do we steer into/away from the governmental craziness?”

WINTERS: Yes, definitely. The idea for this season was hatched before the election, so obviously, it’s not like we saw which way the election was going to go, but given the way it went, the onus became a bigger one to actually deal with the new world order, coming off the heels of the election. So yes, it was a question of navigation, every step of the way.

AX: Have you gotten any responses about BERLIN STATION from anybody in the intelligence community?

WINTERS: No. We have been asked that question a couple of times today, and no, have not heard [laughs] – my phone has not rung with somebody from Langley calling to give their opinion on the show. So I couldn’t speak to their feelings about the show one way or another.

AX: What were you happiest about in first season? Was there a moment or a scene or a thread where you went, “We really nailed that one”?

WINTERS: Yeah. I think for me the moments where the characters popped most as professional colleagues and as friends and acquaintances with personal histories outside of the workplace. And it’s a show that sort of bounces in and out of the station, the workplace, between that and the field. While I’m so happy with some of the big, exciting sequences we shot out in the field, I think the show also had some of its standout moments right there in the office place, in the throes of attempting to plan an operation, and all the stress and pressure that the job brings, and where the relationships really became most crystallized in those crucible moments for me are where I think the show popped most.

AX: And was there anything where you thought, “Maybe we should handle that differently in Season 2”?

WINTERS: Given the size of the cast, and the complexity of various interwoven storylines in Season 1, in Season 2, we thought it would be really helpful to give the station one central mission, and then to see how the different characters spoke into it, into that hub, in different capacities. Because it is a big show. It’s a big cast, it’s a big ensemble, it takes on large, complex storylines. And so how to stay true to that, but at the same time, make sure that nothing is lost on the audience, is something that we discussed internally a lot going into the second season. And the show seems to be at its best when they’re working together toward a common goal.

AX: Do you have any notion of how many seasons you’d like to see BERLIN STATION run?

WINTERS: Oh, boy. You always want a show to go as long as it can and remain as good as it can. I think this is a show that certainly has several more seasons of life in it. But to put a number on that, I wouldn’t know.

AX: And what would you most like people to know about BERLIN STATION Season 2?

WINTERS: That it is a show that would speak a lot to the current political climate in America by shifting its lens to what’s happening in Europe at the moment, and there’s a great dialogue to be had, I think, between the show’s second season and what America has just been through politically, and what it continues to go through. There’s a real dialectic there that, wrapped in an entertaining package, will be very appealing to many an American viewer.

This interview was conducted during Epix’s portion of the Summer 2017 Television Critics Association (TCA) press tour at the Beverly Hilton Hotel.